When Twitter first launched, a tweet was just text, 140 characters of it. Fewer than a text message. Twttr was so addicted to brevity, it didn’t even have vowels. It’s a far cry from the Twitter that’s slowly been revealing itself over the last year or two — the Twitter that’s not simply a technology platform but a media company that wants to become an empire.

Twitter was always defined by what it wasn’t — its trademark feature, the 140-character limit, became not simply the ethos of the service, but culture as a whole, a constant process of distillation down to the tiniest atomic units of thought and speech. A tweet became the new sound bite. This sentence is exactly the length of a tweet — 140 characters — and all the substance that one tweet could contain, not all that long ago. Today, on the other hand, a tweet can be a video, an Amazon listing — and they’re all hunks of media packed onto a never-ending conveyor belt. The crisp, bracing stream of words that was Twitter is now a sludgy river of content. 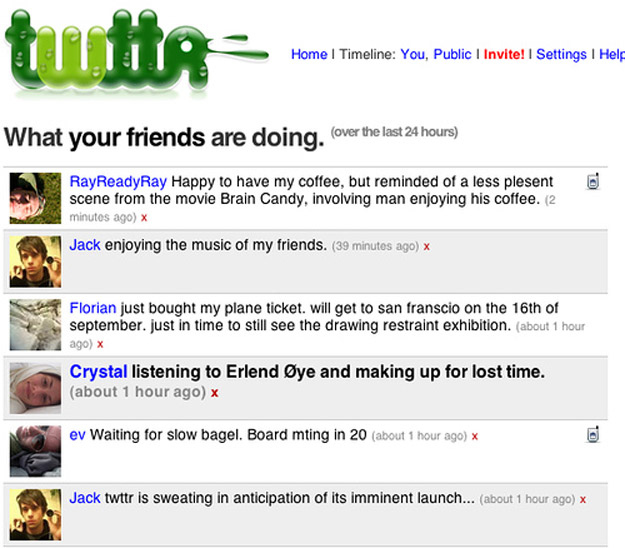 In the beginning, what Twitter was — the vision — was driven primarily by its users, which is totally different scenario than today. The service launched in July 2006; while the company added favorites and direct messages and timestamps within the first few months, in the same time frame users created much of the syntax that has come to define Twitter. The @reply organically emerged from users, before officially being codified in May 2007; hashtags showed up a year after Twitter launched, in summer 2007 — again, created by users. So were retweets, which have a strange little history, briefly chronicled by Favstar.fm founder Tim Haines. Twitter developers were a close second to users — the team behind Twitterific, the first Twitter app, coined the word “tweet,” along with using a bird icon to represent Twitter. Taken together, these things were the core of Twitter — the text-based Twitter. It was a little complicated, a little jargony, but ultimately a simple and constrained service totally oriented around its users and developers. This was the Twitter users and developers loved. 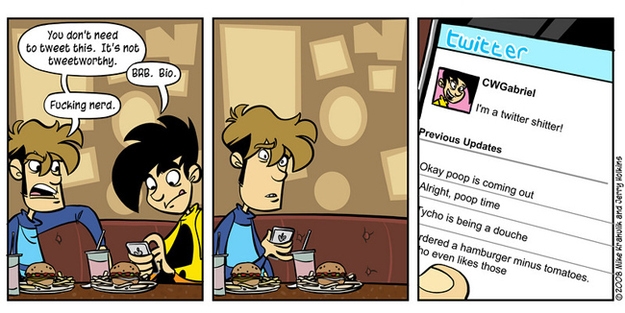 The joke about how useless Twitter was back then was a result not so much of its relative simplicity as it was the question that Twitter asked initially when users stared at the box, waiting to type: “What are you doing?” Well, very possibly poopin’. Currently, Twitter blandly invites you to “Compose [a] new Tweet…” which could contain, well, anything. A link, a video, a photo — a lot of things that are not poopin’ or “waiting for slow bagel,” as founder Ev Williams did back in 2006. 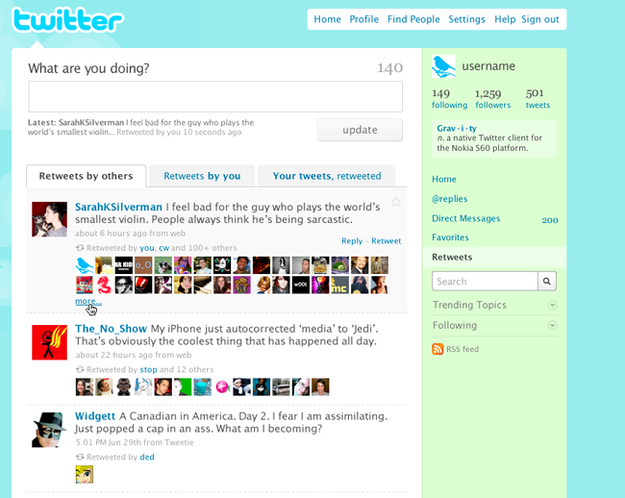 A mockup for official retweets showing Twitter circa 2009 Via techcrunch.com

Favorites, which arrived fairly early, were in a sense the first kind of data you could add to a tweet — something that extended outside of the tweet itself — followed by a new architecture for the @reply in 2008, which built actual infrastructure around the convention, creating conversations. In summer 2009, Twitter codified and began its process to co-opt the retweet, creating an entirely new system for it as a kind of embedded tweet — the “official retweet,” as it were. A seemingly minor point, official retweets were one of the first majorly controversial Twitter decisions, and one of the first points at which Twitter really began taking control of a core part of the experience. Location geotagging arrived in November 2009. By the end of 2009, tweets, those little spurts of 140 characters, actually contained a lot of metadata that users could inject into them: who, where, and when. If you were to X-ray a boring little tweet in March of 2010, it would look like this: 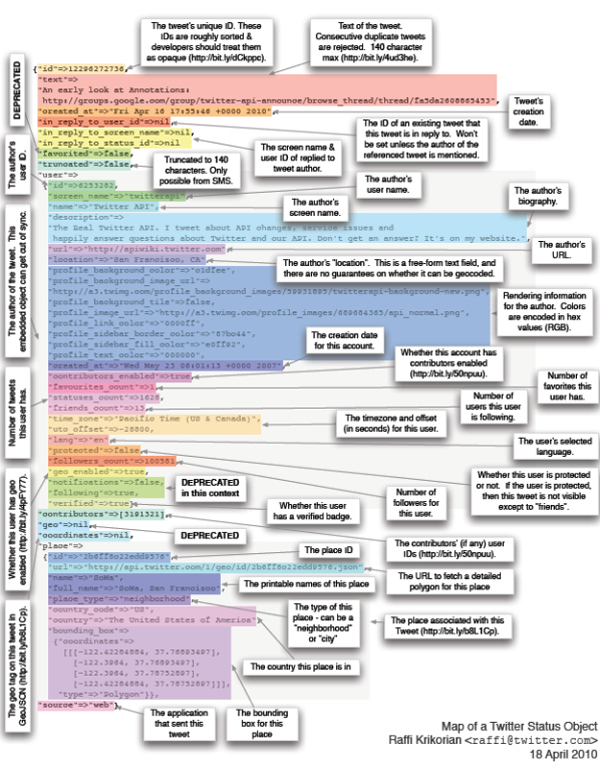 Even with that multitude of metadata underneath it, the nature of a tweet was still fairly spartan. There was no room for window dressing, extraneous language, or thought; it was simple, direct, essential. It was a tweet.

The road that led to the Twitter exists today may have started on January 15, 2009, when a plane landed in the Hudson River. Janis Krums was one of a few that tweeted a link to a picture he had taken, hosted on the image-sharing service TwitPic. Effectively breaking “the miracle on Hudson” story was a landmark moment for Twitter — real news! on Twitter! not poopin’! — and it was a picture. Not text, not 140 characters, but 1,000 words. It was a media experience, through and through. That photo wasn’t hosted on Twitter, though, and Twitter eventually decided it needed to run its own photo-sharing service, just like it had decided by 2010 it needed to have its own URL shortening service, appropriating features from third-party services that had been filling holes in Twitter for years, largely strangling them in the process. (This is what Krums’ tweet looks like today — compare it to the 2009 screenshot.) 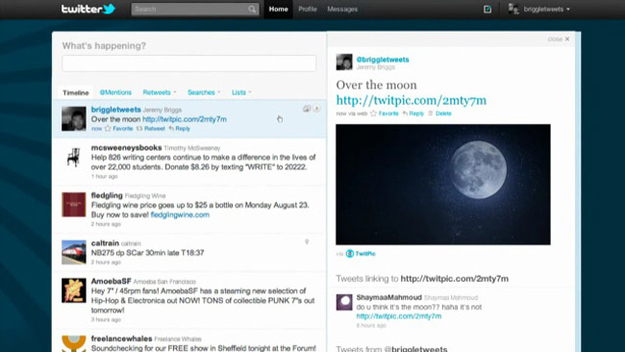 Sept 14, 2010, was the day that Twitter as we know it today was born: New Twitter — sorry, #newtwitter. It was a brand-new design, and the root of the current design. Most important, it embedded photos and videos directly into the Twitter experience. When you clicked on a tweet on twitter.com, it slid out and revealed the photo or video you were sharing — you no longer had to click a link that would whisk you away from the site to see a picture. Twitter went from being a stream of text on its face to a multimedia experience, one with photos and videos. Also packed inside this new tweet style was all the metadata users might’ve ignored before, presented in a new way — geotags turned into maps, @replies forming an unbroken stream of conversation. This is when Twitter became more than a messaging service — it started to become a media thing. A couple months later, it was embedding music from iTunes and its failed social network Ping (ew).

A few months after that, Twitter began taking total control of the platform, telling developers to stop building third-party Twitter clients. (A move that was foreshadowed when Twitter bought the most popular Twitter app for iPhone at the time, Tweetie, in April 2010.)

The simplified layout that launched a year later made another critical change: While the previous version of New Twitter shot a panel out to the side when you clicked on a tweet, sliding out to the right whatever photo or video was attached to it, in this design, tweets expanded downward, maintaining a single column. In other words, multimedia wasn’t simply embedded in Twitter itself, it became a literal part of the stream. The stream itself had finally transformed into something more than a river of text and links. Also super important, Twitter established the four pillars of the service that are still with us today: Home, Connect, Discover, and Me. These are the bones and sinew of the current Twitter, with Twitter having revamped Me to feel more like profiles a couple months ago, and Discover to be more of a media stream on mobile devices the other week — seemingly leaving Connect and Home as the next steps for a redesign. 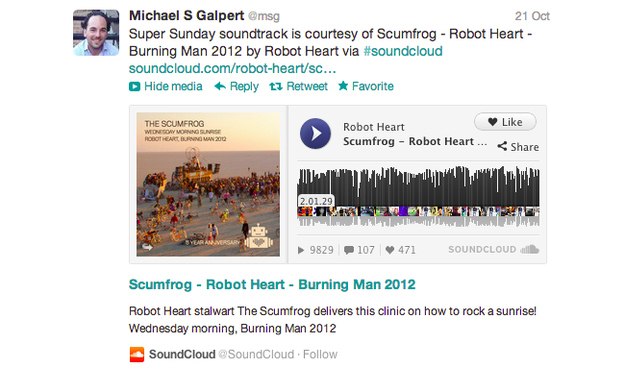 Six months after that layout debuted, Twitter launched “expanded tweets,” stretching the stream from a river of text and photos and videos into something that more closely resembled Facebook’s Newsfeed by adding article summaries — complete with headline, excerpt, photo and author information — from select partners like The New York Times and yours truly.

These expanded tweets, powered by what Twitter now calls Cards, were another turning point toward the Next Twitter, expanding the scope of what could be (in) a tweet — a photo or video from a selected service — into an infinite range of possibilities. Cards are the literal building blocks of what Twitter is becoming on one level — a media platform that developers build “experiences” into, much like Facebook. It was around this time that Twitter seriously warned developers that Twitter clients were really, really, really a dead end. The only way to look at Twitter would be the way that Twitter wanted users to look at Twitter.

A few weeks ago, Twitter revealed that the Card-based ecosystem now has “more than 2,000 ways to bring more interactive and engaging Tweets to your stream.” Things like SoundCloud songs, Amazon item listings, and CNN videos — these giant expanses of imagery and interactive elements — are now a part of your stream, along with everything else. (One side effect of expanded tweets and Cards becoming the new normal: Whenever an article summary or photo isn’t embedded in Twitter as an expanded tweet because the host hasn’t partnered with Twitter, the experience feels rather broken. “Ughhhhh, I have to leave Twitter to see what this is?”)

Right now, expanded tweets in your main timeline require exactly that — they have to be expanded to reveal whatever photo or article they contain — but if you go to the Discover section on Twitter.com or the mobile apps, you can see what Twitter looks like when all of these media-filled tweets are always expanded. It feels far more like Facebook and Tumblr than the old Twitter. Discover seems like a preview of what the main Twitter feed will be like, based on my conversations with Twitter designers a few months ago and more recently, in which they repeatedly emphasized their desire to create streams that are “richer” and more viscous. When I talked to Twitter designer Josh Brewer about the redesigned Discover section in Twitter’s mobile apps — which, like Discover on Twitter, now shows photos and videos fully expanded, all the time — and the effects a long stream of media could have on the feeling of using Twitter, a service long defined by its brevity and speed, he was confident that the new, graphically intense Discover section “feels very much like you’re in Twitter, not something different.” As I wrote then, “Twitter has thought about what a very different kind of Twitter stream, one packed with images and articles, will feel like. It thinks you’ll be cool with it.”

(Of course, advertisers will definitely be cool with it as well. Imagine how much Tide would love it if, instead of a tiny 140-character box that you have to click on to reveal the full ad, this giant block, with a big picture and text, took up a sizable chunk of your main feed as you scrolled through. While I don’t think that advertising and revenue are the main reasons that Twitter has been evolving from a text-based service into what it is today and will be very soon — I think Twitter’s mostly interested in building a rich media experience because that’s what the people there want to do — but advertising certainly works better with the new Twitter and the next Twitter than it did with the old Twitter, and it’d be ridiculous not to acknowledge that.)

So, this is the Twitter we have today, and the one we’ll essentially have for the foreseeable future, particularly since Twitter has pushed out third-party developers and clients that would give us an alternative way to look at and use Twitter. It’s rich and graphical and dense and will only become richer, denser and more media-heavy still. It’s ultimately a different service now, no longer simply about the best you can do with 140 characters.

Twitter will argue it’s still fundamentally itself, but there’s no doubt that tweets are no longer constrained to simply what’s essential. That bite-sized essentialism is what made Twitter Twitter, so it’s hard for it to argue that’s it not something different now as it tries to feed us deluxe chunks of photos and video and articles and every other kind of media. Twitter may well be just as important today as it was yesterday, if not more so, but the things we’re saying with it now just don’t feel quite so essential anymore.