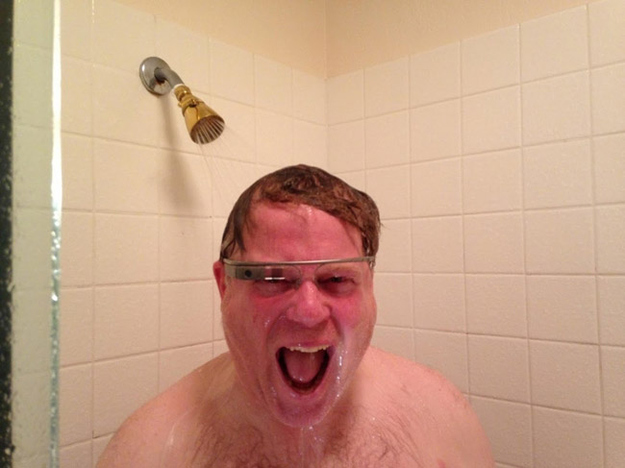 It’s too early to know how important Google Glass will be, or when “wearable computing” will go mainstream. But here are two extremely safe predictions:

You could argue that the law holds all the way back to the newspaper, but not fully — newspaper reading was generally done in private or in situations where interaction with others wouldn’t otherwise be expected. It may be projection to read wryness in this 1865 account of a railroad accident in Pennsylvania:

Perhaps a closer analog to modern gadget use is novel-reading, which was for decades dismissed by mainstream critics. Most took issue with the contents of the novel, but others, like the “Layman” who penned this (oddly religious) screed against novels, worried about the effect on the mind — and how reading novels mediated personal interaction: 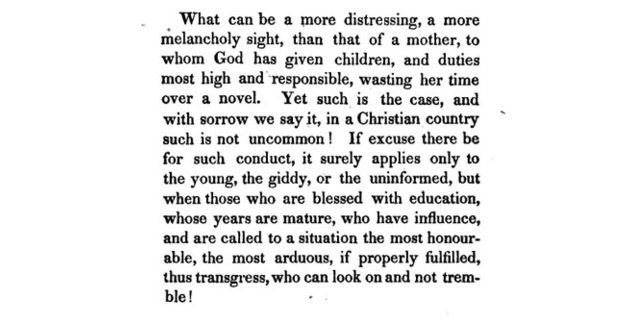 But the Law of Distraction is really a law for gadgets — for modern, portable, electronic technology. And the first massively popular piece of portable electronics illustrates its power perfectly. When Akio Morita, the cofounder of Sony, brought an early Walkman home to his wife, she was horrified:

“The Walkman’s effect on personal interactions was often people’s first impression of the device and its reception was often cool as a result,” writes Andrew Williams in “Portable Music and Its Functions.”

The sensation of being “shut out” by portable music was studied at length — it was the subject of academic studies in a way that the isolating effect of smartphones doesn’t seem to have been. The term used most frequently was “interpersonal mediation,” and others tried to give the experience of private-yet-public listening its own name. Shuhei Hosokawa’s “Walkman Effect” stuck for a while; in his 1984 article on the subject, he recalled a survey taken in the French Le Nouvel Observateur magazine. The interviewer asked young people if Walkman users were human or not, if they had lost contact with reality; if they might be psychotic, or if they were worried about the future, because of the Walkman. One simply told the author, “Your question is out of date.”

People didn’t just wrestle with the idea of the Walkman as a distraction, they paid special attention to how listeners were perceived by others. The consensus? People with Walkman headphones on were annoying. Rain Schonhammer wrote in 1989:

More than Gameboys, cell phones, and cameras, the smartphone, which has replaced all three, demonstrates the law beautifully. Everybody loves their smartphones, yet everybody hates how distracted smartphones make the people around them. It’s a completely relatable yet paradoxical cultural phenomenon — everybody agrees that texting while ______ing is a problem, but nobody thinks they’re part of the problem.

Microsoft is the only major tech company to try to take the opposite idea to market, promoting Windows Phone as a smartphone that won’t distract you. The problem is, a distracting cell phone is a cell phone people like using. A cell phone that doesn’t distract you doesn’t sound like much fun. It didn’t work.

Judging by the public’s response to the idea of Glass, which is perhaps the most profoundly negative since the Walkman, Google has a hit on its hands. Glass is instantly annoying, not least because — less like a smartphone but more like a Walkman — you don’t know what the wearer sees. You don’t know what he knows. He’s a Glasshole. It’s so, so much worse than a “private acoustic world.” Morita’s wife would not be pleased.

But Glass begins to complicate the theory too. Its concept at least promises less distraction, not more, than a smartphone. Yet its appearance suggests constant mediation.

So consider an additional law, which doesn’t contradict the first law of distraction but complements it, in the same way quantum physics complements Newtonian physics. That is, Newton’s physics hold up until we approach the speed of light — until unforeseen extreme variables render things senseless. Google Glass approaches the light-speed of annoyingness.

The law of distraction holds up until a point of constant distraction, the point at which distraction becomes indistinguishable from augmentation, the point toward which Glass is propelling us. Glass, which doesn’t so much overlay reality as sit alongside it, isn’t there yet. It will succeed or fail on the same social terms as the Walkman: because it’s compelling and separate from the world, and therefore distracting, annoying, and isolating. But it will be one of the last to do so.

Google Glass 2, or 3, or 10 — Google Brain, perhaps — will undermine the concept of distraction altogether, and render old theories useless.

“Distraction,” a hyperconnected future implantee might ask, “from what? Your question is out of date.”