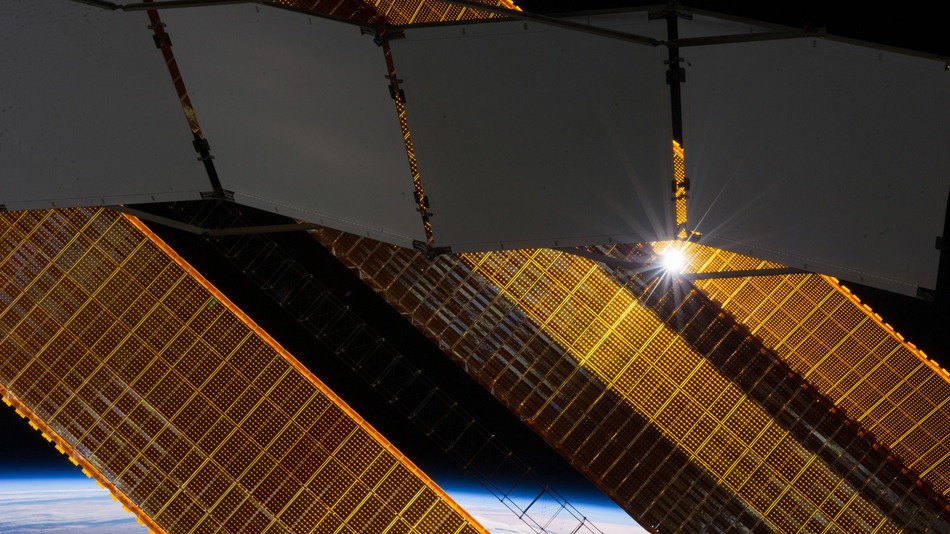 The sun shines through a truss-based radiator panel and a primary solar array panel on the Earth-orbiting International Space Station (ISS) in this photograph taken by an Expedition 38 crew member on Jan. 2, 2014.

The commercial spaceflight company Orbital Sciences Corporation will attempt to launch a milestone cargo delivery mission to the International Space Station today (Jan. 9), after a one-day delay due to a huge solar flare.

An Orbital-built Antares rocket is counting down to launch the company’s robotic Cygnus cargo ship toward the station from NASA’s Wallops Flight Facility on Wallops Island, Va., at 1:07 p.m. EST.

Orbital Sciences called off plans to launch the Cygnus cargo mission, called Orb-1, early Wednesday to allow time to study the radiation fallout from a major solar flare on Tuesday. At the time, Orbital officials were concerned the increased radiation from the flare could doom the Antares rocket launch.

“Upon a deeper examination of the current space weather environment, Orbital’s engineering team, in consultation with NIASA, has determined that the risk to launch success is within acceptable limits established at the outset of the Antares program,” Orbital officials announced late Wednesday.

The launch may be visible to observers along the U.S. East Coast, weather permitting. According to launch maps released by Orbital, the Antares rocket could potentially be visible streaking toward space from as far north as Boston and as far south as northern South Carolina, depending on conditions. [How to See Orbital Sciences’ Jan. 9 Rocket Launch (Visibility Map Gallery)]

Wednesday’s launch delay was prompted by a major X1.2-class solar flare a day earlier. X-class solar flares are the largest types of flares from the sun, and Orbital officials wanted to make sure the flare would not interfere with any of the electronic systems on the Antares rocket. The Cygnus spacecraft is built to withstand such solar events, Orbital officials said.

Orbital’s Cygnus spacecraft is an unmanned resupply ship packed with 2,780 pounds (1,260 kilograms) of supplies for the six astronauts on the space station. The Orb-1 mission is Orbital’s first of eight planned delivery missions to the station using the Antares rockets and Cygnus spacecraft under a $1.9 billion contract with NASA.

The two-stage Antares rocket will lift off from the seaside Pad-0A at NASA’s Wallops Flight Facility and take about three days to reach the International Space Station. Astronauts on the station plan to capture the spacecraft using a robotic arm on Sunday (Jan. 12) and park it at a docking port.

The Dulles, Va.-based Orbital Sciences is one of two companies with NASA contracts for unmanned cargo delivery missions to keep the space station stocked with supplies. The other firm, the Hawthorne, Calif.-based SpaceX, has launched two of its own 12 missions for NASA under a $1.6 billion deal, with the third slated to fly on Feb. 22.

Orbital initially hoped to launch the Cygnus Orb-1 mission in mid-December, but delayed the flight to January to allow astronauts on the station time to perform emergency spacewalk repairs on the outpost’s cooling system. A one-day delay to avoid freezing cold temperatures on Tuesday (Jan. 7) also pushed the launch back.

Orbital launched two test flights of the Antares rocket and Cygnus spacecraft in 2013. The company plans to three official cargo missions to the space station this year.

With NASA’s space shuttles retired, the agency relies on Orbital Sciences, SpaceX and international partners like Russia, Europe and Japan to launch cargo and crews to the International Space Station. On Wednesday, NASA announced that it will extend the lifetime of the space station through 2024, adding four extra years of operation to the outpost. So more commercial cargo ship flights may be required during that time frame.

Previous Post: LOL: He Made An App To Change The World. 2 Minutes Later, He Totally Regretted It.
Next Post: An Atheist Explains What He Actually Believes