Watch How A 4chan Hoax Happens

When the 4chan community starts a raid they meet in a private IRC chatroom. Last night’s meeting took place in a private, IRC-built, self-hosted chatroom. 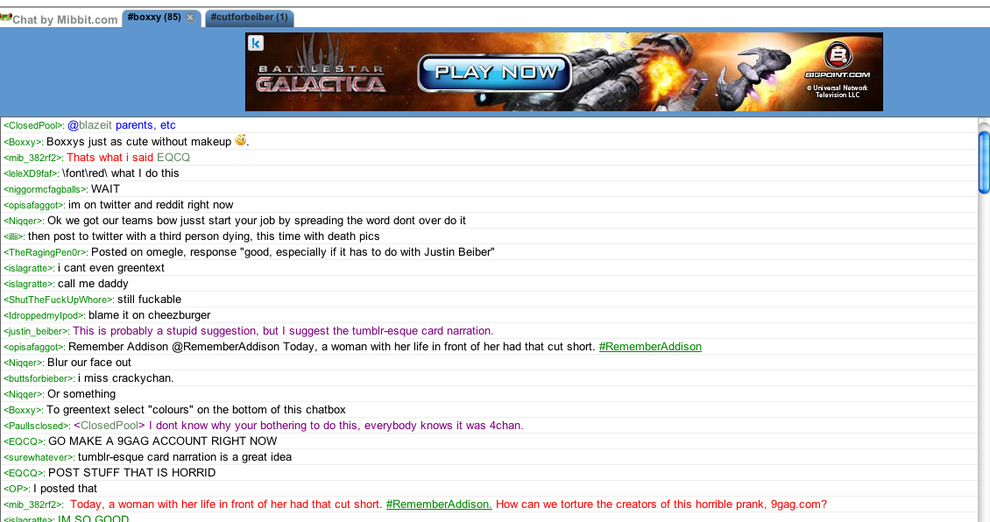 1. Members of the chatroom have agreed upon the hashtag #RememberAddison, which they plan on using to fake a teenage girl’s death on twitter, claiming she was a victim of the #cutting4beiber hoax. 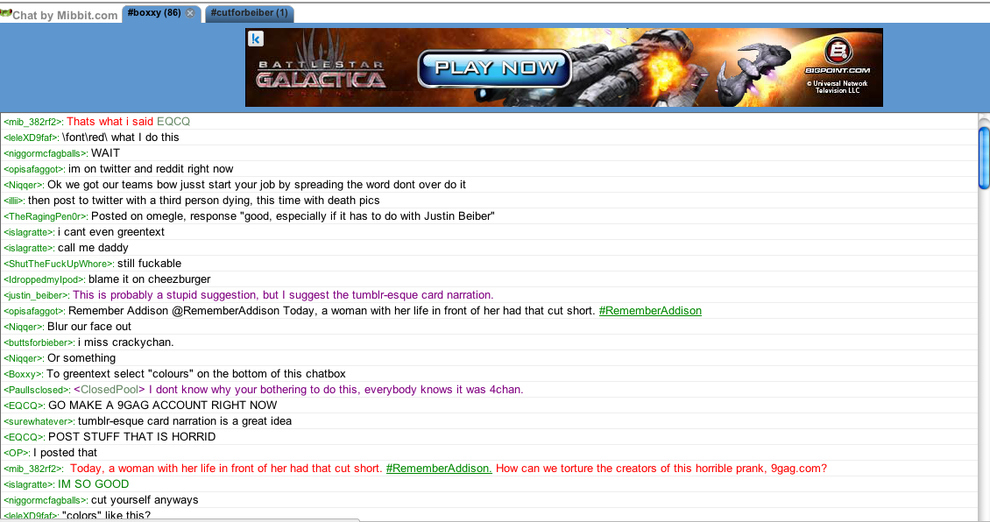 They’re currently deciding on who will spread the death hoax on what social network. Reddit, Tumblr, and 9gag are common targets of theirs. 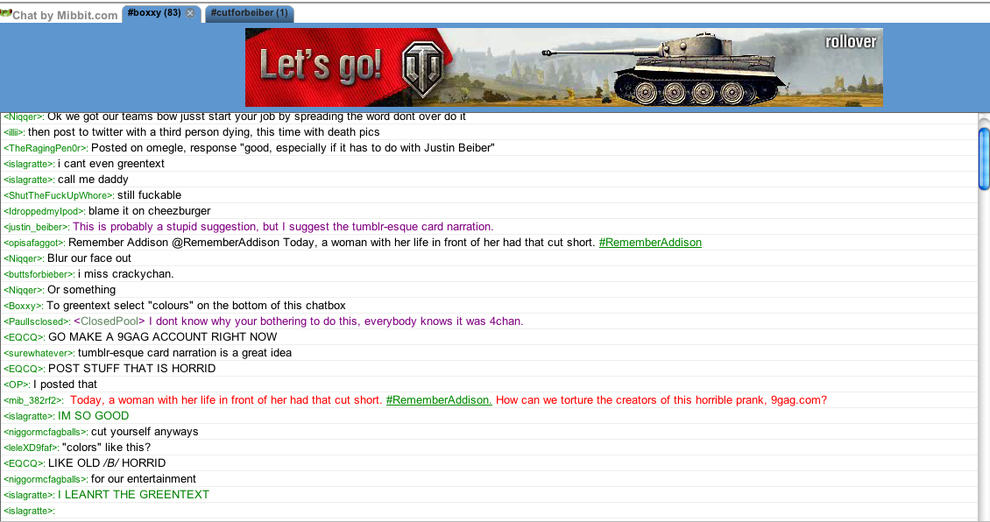 2. They’ve taken things to the next step, creating a false social media trail for this fake Addison girl. One member of the chat writes a script while another member begins making a YouTube channel for her. 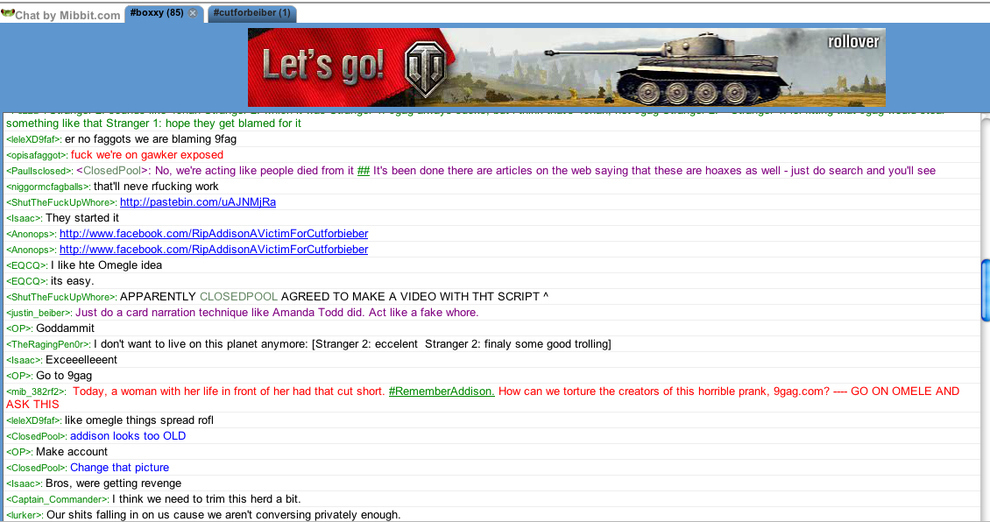 3. They make this fake memorial Facebook page for Addison.

4. And they make Addison’s memorial Twitter page, supposedly run by a grieving brother. 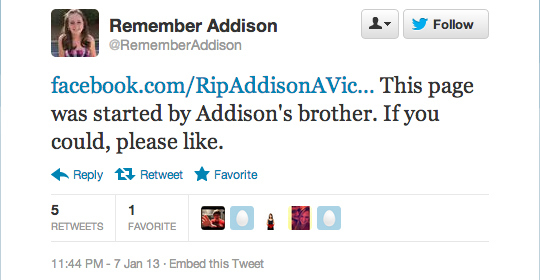 They record a SoundCloud file of a boy reading a script about the fake girl Addison they’ve created. 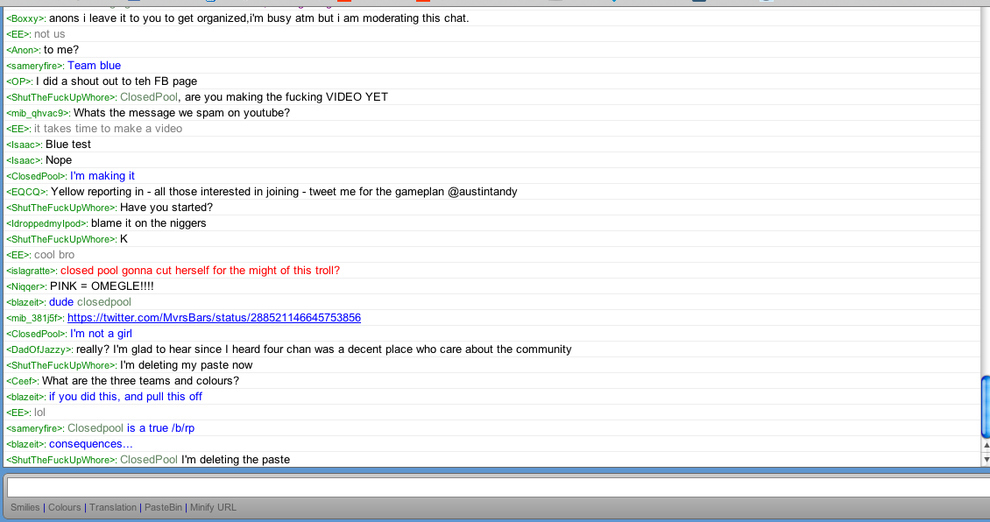 7. And a fake Anonymous warning, threatening to hack 9gag.com in retaliation for Addison’s death.

8. An anonymous user under the screen name CLOSEDPOOL agrees to take the script and make a YouTube video out of it. He signs off and never returns. 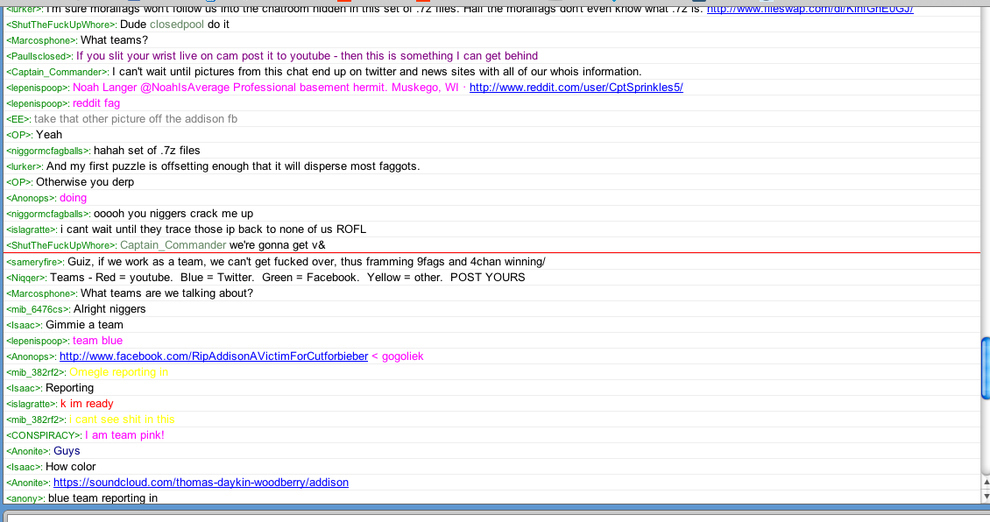 One of the more vocal Twitter users in the chatroom is @Holla4Hitler. 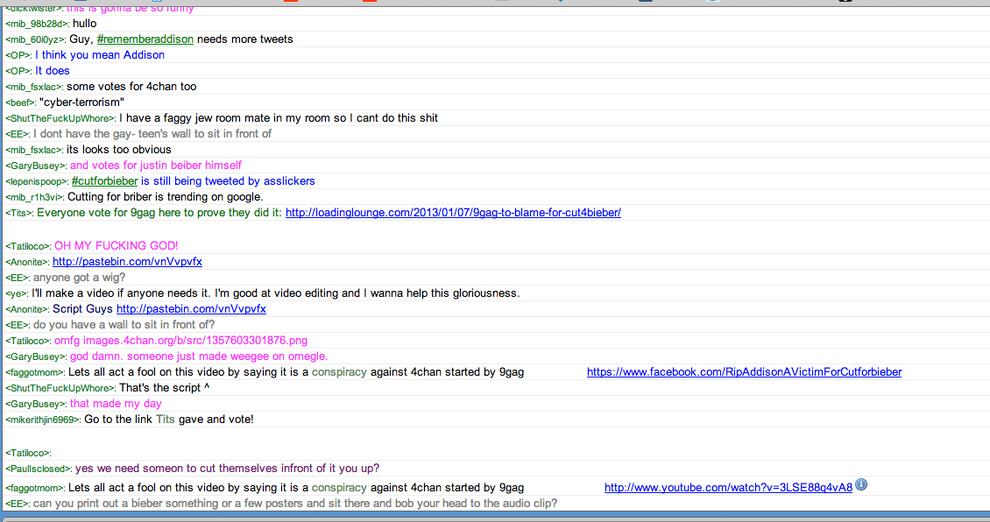 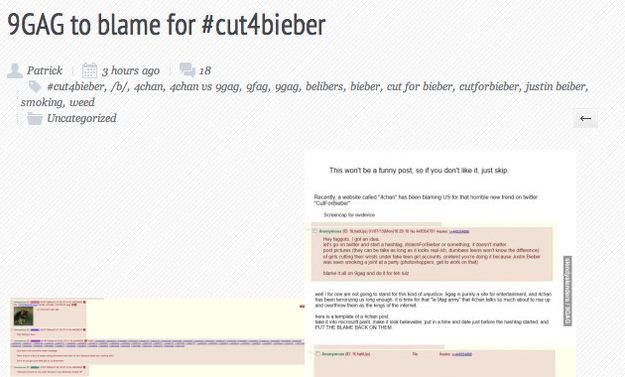 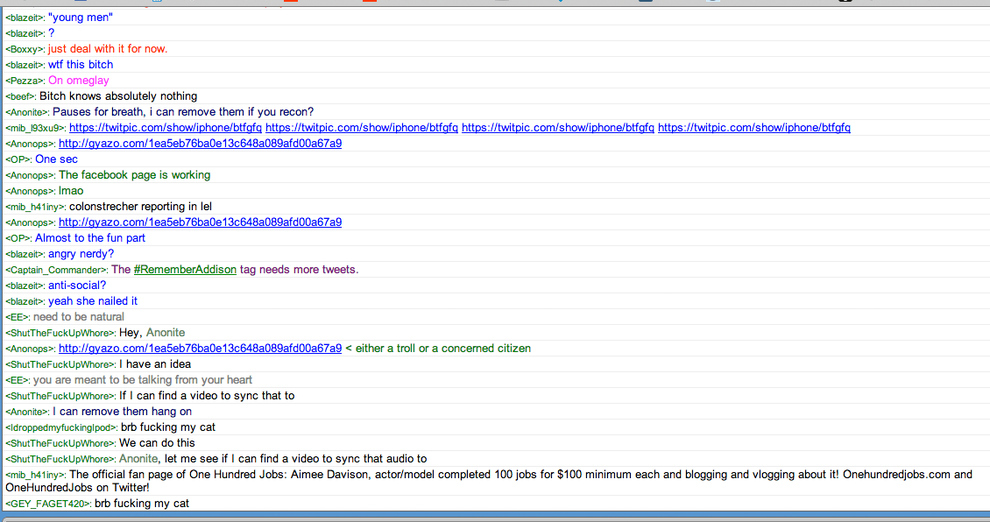 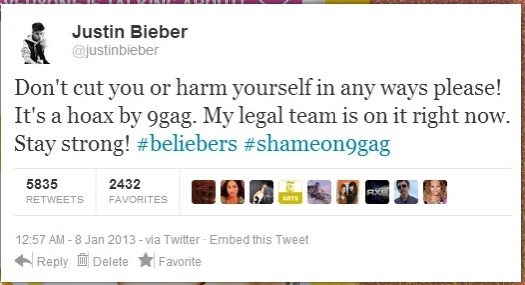 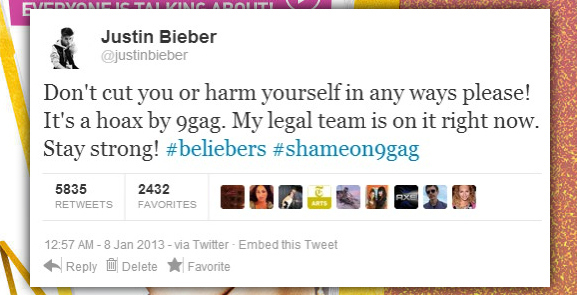 13. And post this notice to 9gag.com and encourage chatroom members to start sharing it heavily. 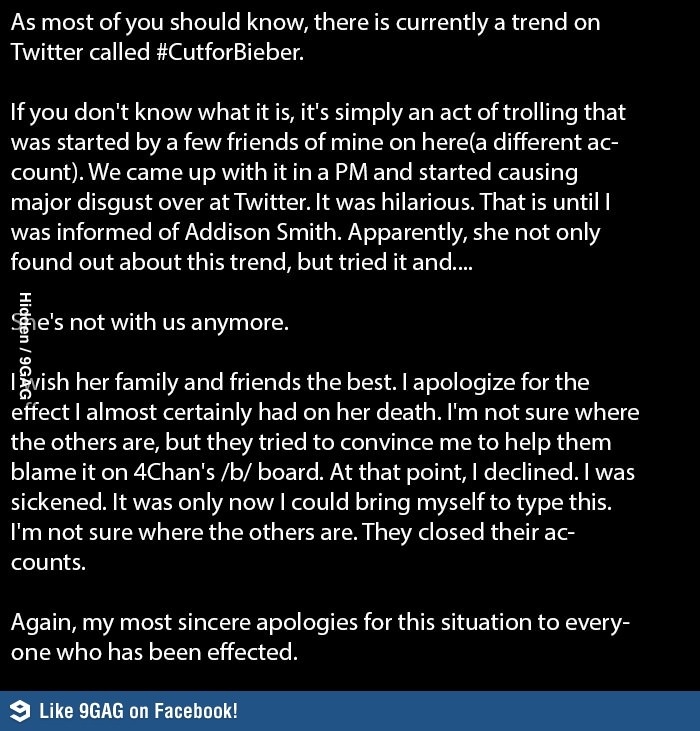 14. By the end of the first few hours they fill up two trending tags, #RememberAddison 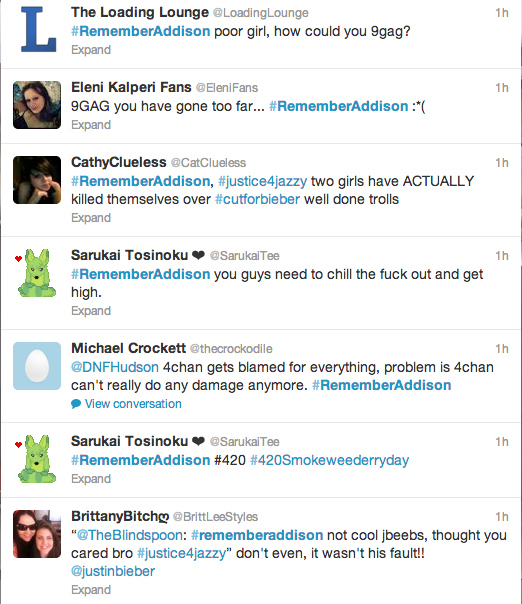 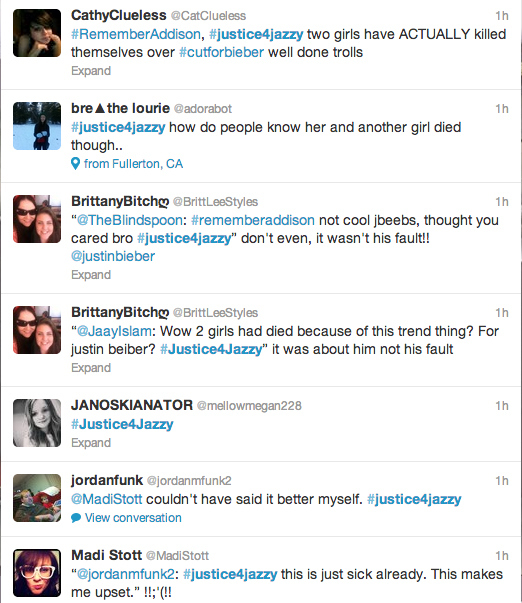 17. They make a fake Anonymous Leader video demanding justice for the #Cutting4Bieber deaths.

18. And post it to Reddit’s /r/videos subreddit. All the comments are from members from the chatroom. 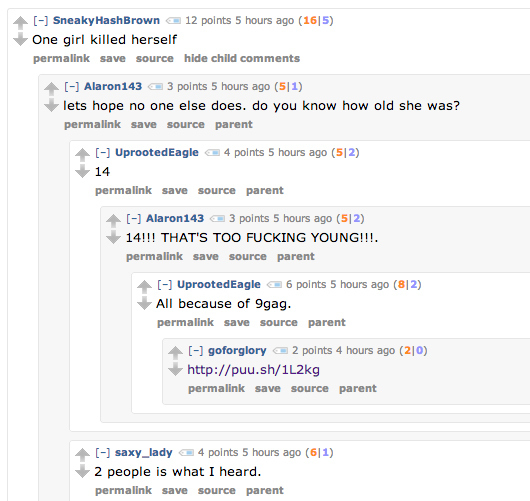 19. They also successfully vote their comments to the top of this YouTube video. 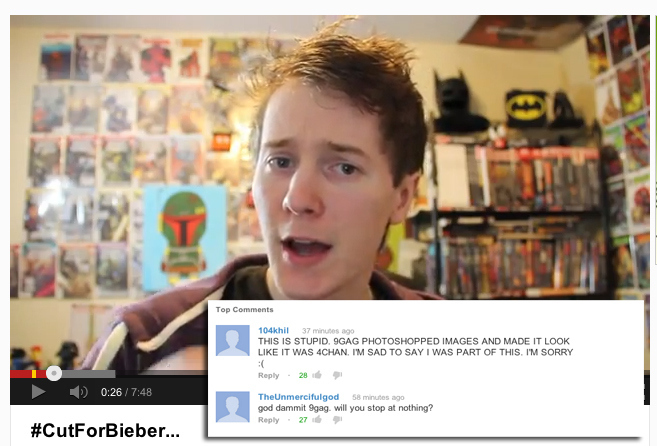 20. The chatroom winds down as the members make plans to upvote their fake videos and links on YouTube and Reddit. 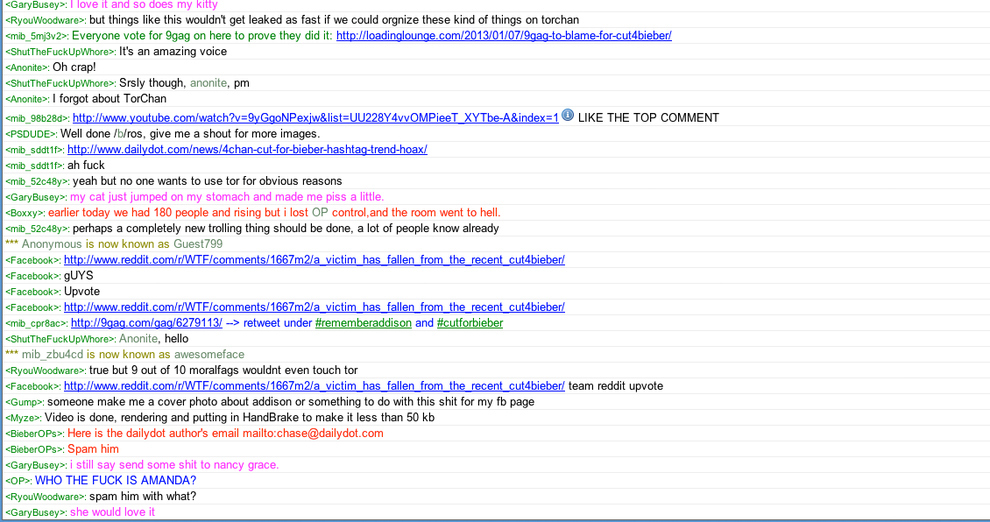 UPDATE: 4chan is currently planning to DDOS BuzzFeed as a result of this article (meaning they’re trying to overload the site with requests and effectively shut us down).