It’s perhaps no surprise that Google has the most ambitious and comprehensive election hub, as it’s perhaps the most vocal big tech company when it comes to political issues. Sure, every company in tech spends tons of money on lobbying and campaign contributions and jumps behind popular industry-wide initiatives like opposing the controversial SOPA bill, but Google is often out front thumping its chest, particularly on issues like net neutrality and China, in a way that, say, Microsoft is not. Its election hub is vast: Home is a running stream of the most relevant news; YouTube Live delivers a constant stream of video from sources around the Web; Explorer, a collaboration with CNN, is a detailed infographic of ad spending and funding; Trends reveals how candidates are doing in search results; Insights is a mix of Google consumer surveys; Voter Info does its best to tell people where to vote and provides ballot summaries; and it has a running results page. Google clearly wants you to vote.

And while former CEO and current executive chairman Eric Schmidt has close ties to Barack Obama, the company’s coverage is decidedly neutral and information-driven. The reason it exists at all, according to a Google spokesperson, is that it’s a “part of our mission to organize the world’s information and making it universally accessible,” so Google is “working with election officials across the country to centralize and give voters easy access to voting information they need online.” 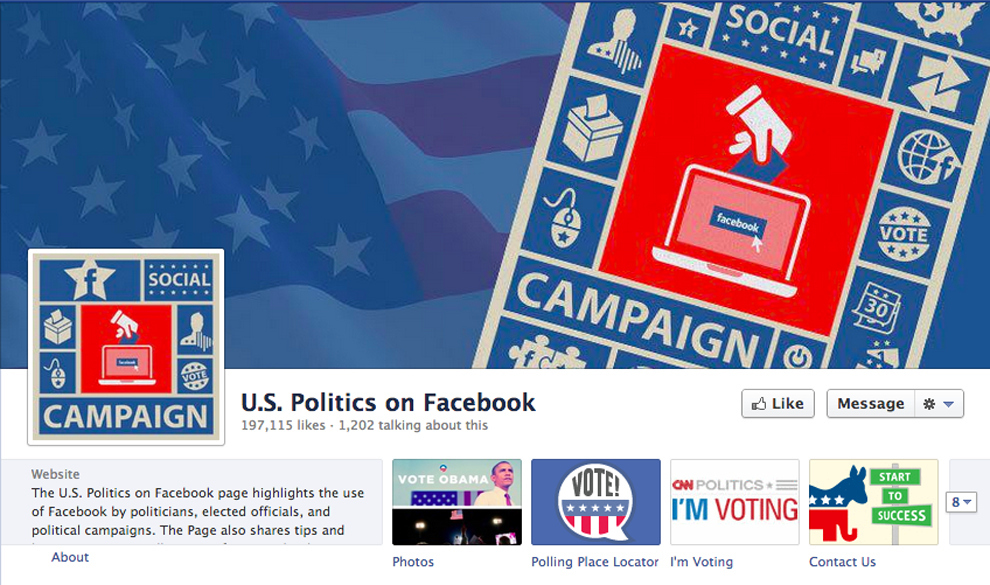 Facebook has, by far, the most ambitious get-out-the-vote campaign of any social network. The reason, says Andrew Noyes, Facebook’s manager of public policy communications, is that “Facebook is a non-partisan platform and encouraging civic engagement on election day” and voting is “part of Facebook’s mission to make the world more open and connected.” 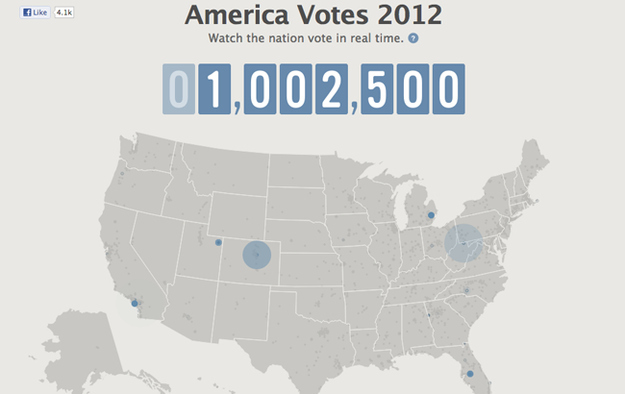 To that end, as in 2004 2008 and 2010, it’ll show every U.S. user over 18 a message in their Newsfeed about voting — in 2010 over 12 million users engaged with it. Facebook isn’t sure how many people that’ll be this year, but with 171 million U.S. users, “that’s a lot of eyeballs,” says Noyes. Once you’ve voted, you can interact with the Newsfeed item to let your friends know that you have. Additionally, Facebook has teamed up with Microsoft and the Voting Information Project to create a polling-place locator, along with a real-time heat map showing where other Facebook users are voting state by state, powered by users telling Facebook that they’ve voted. It’ll be available from Facebook’s voting Newsfeed story or here. Facebook’s also deploying its talkmeter, which measures the overall buzz around voting and ranks it on a scale of 1 to 10. All of this will be happening on Facebook’s Politics hub, which is located right here.

Most notably, Tumblr’s been running its own newsroom during the election at a special section of the site. Liba Rubenstein, Tumblr’s politics & outreach director, says Tumblr is mostly “driving folks to tools that will help them get out today, and then to the plethora of amazing content across the site, rather than trying to create something new ourselves” but it’s doing a few things in the get-out-the-vote arena. This post telling users to vote will be pinned on the site, it commissioned artists for its Go Vote page, and it’s pushing users to “post photos of themselves voting” with the tag #GPOTV. 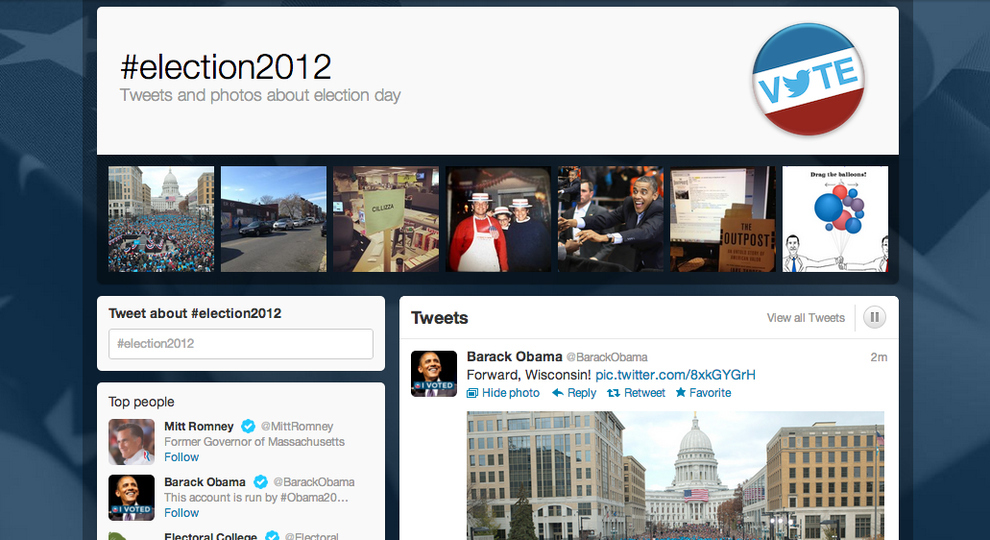 Twitter’s election page is oddly almost perfunctory, an event page not too dissimilar to what it produced for the Olympics. I say oddly because Twitter is a fairly activist company in one sense, aggressively fighting for the rights of its users, most famously to avoid turning over the tweets of Occupy members. Yet its election hub is little more than a page of curated tweets and photos shared on Twitter. It’s a news event, not something it’s encouraging you to participate in.

The smallest of the bunch, with 25 million users, Foursquare’s handing out “limited edition I Voted” badges to anyone who checks into a polling place. It’s also directing users to the nearest polling place and over the course of the election, it’ll be mapping out where people are checking in to vote, with breakdowns of the number of checkins, along with locations, gender split and peak times, on a state by state basis.

Here’s the big question, though: Does any of this work? Does Google and Facebook telling you to vote actually make you more likely to do so? Well, limited evidence from one study suggests that it does, particularly with social networks where you’re interacting with close friends: “The results show that the messages directly influenced political self-expression, information seeking and real-world voting behaviour of millions of people. Furthermore, the messages not only influenced the users who received them but also the users’ friends, and friends of friends.” So maybe there’s something to this social media election after all.