Sad trombone: Obama tries to pick up the pieces of his broken soul at Denver rally

Energetic Obama in full-pander mode at Denver campaign rally. Someone found his "ON" switch this morning.

On the heels of his disastrous debate performance, President Obama held a rally this morning during which he attempted to clean up the tattered remnants of his dignity. You can view the whole sorry spectacle here.

An estimated 12,300 supporters showed up to listen to the pander-fest:

Pres Obama and performance by Will I. Am, draws crowd estimated at 12,300 to Denver campaign rally. 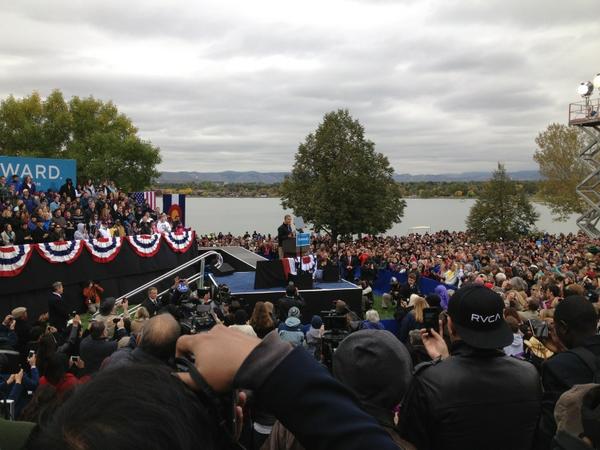 will.i.am warmed them up with a little Journey beforehand:

But it looks like many of them already have:

So just saw Obama at a rally in Denver, why wasn't this guy at the debate last night?

Obama, still picking out the splinters from his trip to the woodshed, had to carefully craft an excuse for his crappy debating skills. He ultimately went with blaming Mitt Romney, natch. You see, we didn’t see the “real” Romney last night; we saw Snidely Mitt!

Pres Obama says the Mitt Romney he debated last night was "not the real Mitt Romney." Cites changes in his policies at the debate.

Pres Obama said the "real Mitt Romney" campaigns for $5-trillion in tax cuts, but the Romney at the debate knew nothing about it.

Pres Obama said the man on stage last night doesn’t want to be held accountable for the real mitt Romney and what he says.

Barack also stuck up for his buddy Big Bird:

Obama in Denver rally: "Finally someone getting tough on Big Bird." Seems like he needed that line 15 hours ago.

Of course, no rally would be complete without a bit of bin Laden football spike-age:

President Obama: “A new tower rises above the New York skyline, al Qaeda is on the path to defeat, and Osama bin Laden is dead.”

Obama spiking the Bin Laden football is really getting old. You didn't raid and wipeout ANYONE. #sitdown

He was apparently too caught up in the moment to mention that had bin Laden been taken alive, he would have had the terrorist tried in federal court. Gutsy call!

And, lest the wimmenz feel left out, he made sure to give a shout-out to all the #LadyParts:

You guys: Obama is just saving his debating skills for the #ladyparts debate.

At the chilling morning at Sloan’s Lake Park in Denver, Obama touted his plan for restoring the middle class.

“What I talked about last night was a new economic patriotism,” the president said, continuing his campaign’s theme that the rich should pay more taxes to help heal the nation’s out-of-whack spending.

Does that include exporting more jobs, Mr. President?

Obama shouldn’t be making slip-ups today. After all, he’s not facing the same kind of pressure he did last night:

Obama in fighting mood this morning at Denver rally…when he's not up against, y'know, an opponent. Bold! Forward! #COpolitics #CPACCO

Several observers noticed that Obama attempted to redeem himself by letting fly a couple of zingers that hadn’t occurred to him last night:

For many, his stab at staircase wit was reminiscent of a classic, and equally futile, “Seinfeld” moment:

We expect President Obama will have Air Force One re-routed to Virginia so he can zing Romney in person at his rally tonight.

Obama wrapped up with a plea for his audience to “keep on believin’” in him and a promise to finish what he started. Four more years, everybody!

Hard to digest since I like Bruce… Obama exits #Denver rally with Springsteen's "We Take Care of Our Own."

Romney, rightly confident after his debate victory, didn’t seem to be fazed by Obama’s follow-up performance:

Romney campaign responds to Obama's rally in Denver by stating that the president is "in full damage-control mode."

Damage? You bet. But we’re pretty sure Obama’s lost control.