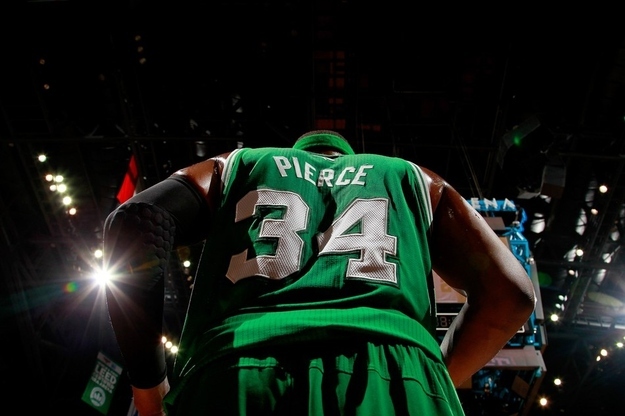 Paul Pierce has always had a flair for the dramatic. Be it last minute heroics or totally real knee injuries, the man knows how to create a moment. It’s one of Pierce’s best qualities, so when he dropped 36 points on Atlanta last night including clutch free throws after playing an absurd for his age 44 minutes, I was ready for Pierce to play up the moment in some hilarious, but kind of awesome way.

And then he walked to center court and Tebowed.

Paul, you’re one of the few current NBA players who have an awesome nickname (“The Truth”). You’ve found (gross) ways to make even preseason games interesting. You faked a knee injury for drama’s sake dammit! It was so hilarious, we didn’t even care it was fake! In the world of NBA celebrations, you bring the melodrama. That’s your style and we love it. Biting Tim Tebow’s corny celebration is unacceptable.

Here are some celebrations you could have done instead:
• Taken a dramatic bow like you just played Carnegie Hall and were overwhelmed by emotion.
• Collapsed on the bench from exhaustion, so people would dumbly compare you to a warrior or a soldier or some other comparison that makes it seem like you aren’t just playing a game.
• Kissed Kevin Garnett’s bald head in a way that made people wonder if you were excited or were hiding something. (Drama!)
• Limped off the floor, so people would talk about how you did it all with an injury. (You’re familiar with this one.)
• Flapped your arms like a hawk and then run your hand across your neck.
• Gotten on the Atlanta arena mic to tell everyone that you did it all for a sick kid named Joey that you met in an Atlanta hospital.

Tebowing is cheap and undramatic. It’s beneath you.

Ridiculous. Hilarious. Dramatic. Awesome. All things we want from a Pierce moment.

Previous Post: Grandma Experiences Virtual Reality For The First Time
Next Post: He Had A Seizure In The Middle Of His First Solo Skydive…And He Barely Survived