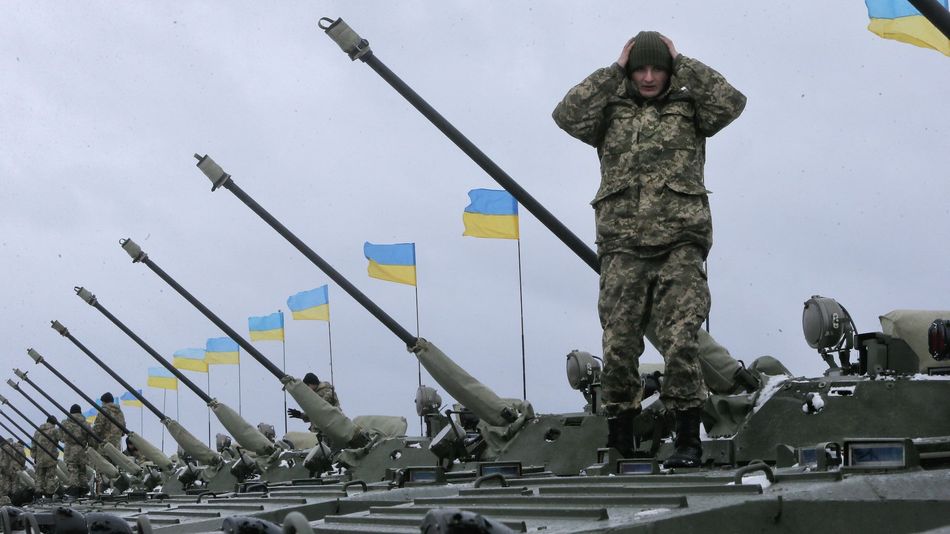 Ukrainian soldiers prepare for a ceremony with the Ukrainian president Petro Poroshenko to mark the delivery of more than 100 pieces of military equipment to the Ukrainian armed forces, near Zhitomir, Ukraine, Jan. 5, 2015.
Image: AP Photo/Efrem Lukatsky

The Ukrainian seaside city of Odessa was rocked overnight by blast that ripped through a volunteer center helping Ukraine’s soldiers on the front lines of the country’s war-torn eastern conflict zone.

The blast, which occurred late Sunday night, was the latest in a spate of explosions around the country, and the second in as many days in the port city.

The Interior Ministry said the explosion, completely destroyed the Euromaidan Coordination Center’s door and window blinds, as well as the double-glazed facade windows of neighboring houses. Windows of cars parked nearby were also shattered. Police said nobody was injured in the blast.

A video published and shared online showed the aftermath of the blast.

A bank burned down and a coordination centre of aid for military blown up in #Odessa overnight via @dumskaya_net pic.twitter.com/miNMv1nBMt

#Euromaidan activists whose office was blown up earlier in #Odessa had refused to hire security. #Ukraine pic.twitter.com/HTIU530BHQ

There have been five such attacks in Odessa in the past month alone, prompting authorities to step up security this weekend by sending Ukraine’s National Guard to Odessa.

War comes to Odessa.
National Guard:
“Law-abiding citizens have nothing to worry, it’s for their own protection” pic.twitter.com/cfNKVl3EID

“Suspicious persons will be stopped and checked, including inspection of personal belongings,” General Ivan Katerinchuk, chief of the regional police, said on Saturday, according to Russia’s Tass news agency.

His comments came on the heels of an attack that same day at an Odessa rail yard, where an explosion blew up fuel tankers, causing them to spill fuel across the train tracks. The incident shut down rail transport while workers cleaned up the spill.

A week earlier, on Dec. 24, a explosion occurred at another Odessa railway station as a train passed. Another blast happened in an Odessa suburb on Dec. 26, killing a man and shattering the windows of nearby buildings.

Top Ukrainian security officials told Mashable previously that they believe the attacks are being carried out by pro-Russian subversives in order to destabilize the country and sow chaos as the conflict in the east rages on.

Oleksiy Melnyk, a Kiev-based security expert, called the uptick in violent attacks “the kind of reality that [Ukrainians] will live with during the next few years.”

Previous Post: James Franco Is the New Spokesman for the Samsung Galaxy 10.1
Next Post: Unbelievable Footage!! You Won’t Believe What This Antelope Does To Escape A Cheetah!