Meet Viserion And Drogon: The New Ant Species Named After The Game Of Thrones Dragons 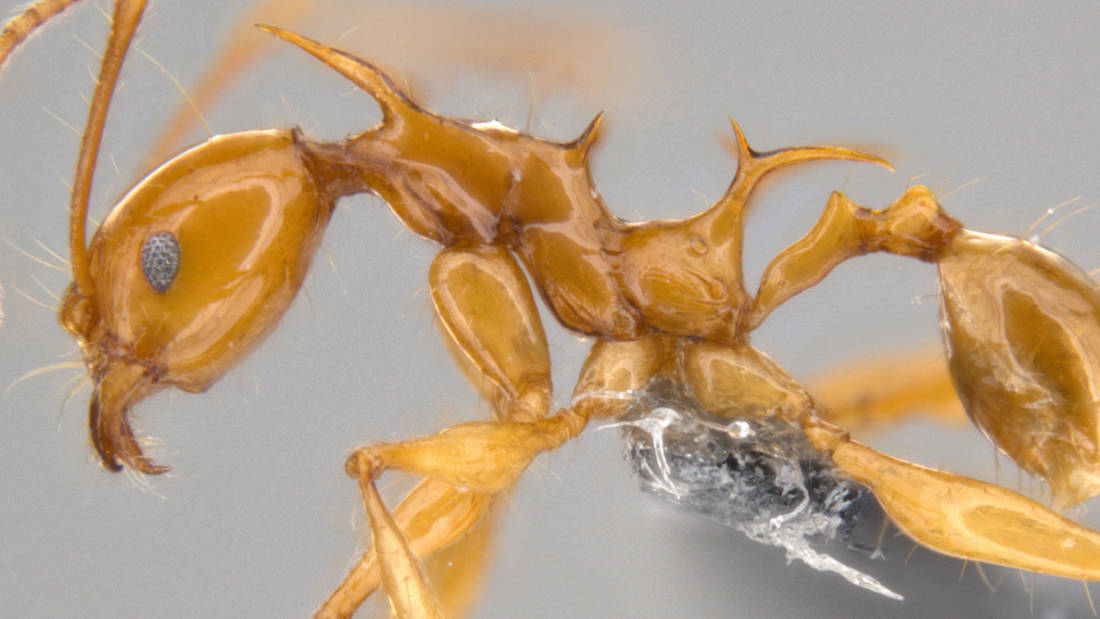 The island of New Guinea is home to some of the rarest animals on the planet. Among them are over 800 species of ants with a diverse range of fascinating characteristics, each well-suited to their unique island habitat. Scientists estimate that around 60% of these ants are found only in New Guinea. In many cases, a single species originally colonised the island and then developed into multiple distinct forms.

Now two new species of ant have been discovered with the help of a major technique that uses 3D imaging technology to identify insects. The ants themselves have a particularly striking appearance thanks to their formidable spine-covered exoskeletons.

Perhaps just as notable as their appearances, though, are their names, Pheidole viserion and Pheidole drogon, inspired by the fire-breathing dragons from the fantasy series Game of Thrones. While not quite in the same size bracket as their mythical namesakes, the ants do have a strong resemblance to the dragons thanks to the distinct blade-like serrations adorning their backs.

Unlike the dragons of fantasy, however, these ants are a product of evolution. So what is the point of their ornate spines? The answer can be found by looking at the social structure of their colonies. The Pheidole group of ants comprises over 40 species that are widely distributed across the islands rainforests.

Pheidole ants also have several different types or castes of worker, each physically specialised for performing specific tasks within the colony. There are smaller minor workers and larger major workers, commonly referred to as soldiers due to their role in defending the colony from predators and rival ants.

The spines could be seen as a defence mechanism for the soldiers, but this may not be the full story. Soldiers are often many times the size of minor workers and have disproportionately large heads that are packed with muscle, making them formidable adversaries. Their heads are so large, in fact, that they require special skeletomuscular adaptations just to support their extra weight. Results from a kind of imaging technique known as X-Ray microtomography have suggested that the ants’ spines are in fact a by-product of this muscular support system, rather than a kind of armour.

This novel imaging method is more like something from science fiction than fantasy, and is opening up the possibility that new insect species could be identified and catalogued much more easily than before. The process works by scanning a mounted specimen with X-rays while rotating it 360 degrees. This produces a 3D cross-section that can then be used to make a virtual model.

In this way, X-Ray microtomography allows scientists to capture precise 3D renditions of their specimens and then easily share them with colleagues around the world. This means insects can be compared and identified without the need to send physical samples back to a lab, saving time and reducing the risk of damaging them. Even more impressively, the technique also maps the internal structures of the insects so they dont need to be dissected for scientists to understand their physiology.

In fact, X-Ray microtomography has the potential to eliminate the laborious tasks of labelling, fixing and dissecting insect specimens that are currently commonplace in science, replacing them with a simple and rapid exchange of data files. In this case, the process also enabled the researchers to uncover new information about the anatomical structure of the Pheidole ant spines, giving them further insight into their biological function.

Classifying plants and animals is still an important tool for studying and monitoring biodiversity. New Guinea in particular holds rich potential for the discovery of new and charismatic species, as the discovery of P. viserion and P. drogon demonstrates. The island comprises just 1% of the worlds land area but is estimated to harbour 5% of all plant and animal species, half of which are yet to be formally described.

Unfortunately, terrestrial ecosystems on the island are in decline, with logging and agriculture posing particularly severe threats. But there is growing interest in safeguarding New Guineas biodiversity and, though much progress is still to be made, descriptions of new species and techniques for identifying them are likely to bolster these initiatives.

If nothing else, the discovery of P. viserion and P. drogon, currently known only to New Guinea, may give Game of Thrones fans a reason to appreciate conservation efforts in this often-overlooked patch of the south Pacific.

This article was originally published on The Conversation. Read the original article.

Previous Post: After Spending $21,000 on Tickets Without Telling His Wife, the Super Bowl Isn’t the Only Thing This Man Has Potential to Lose
Next Post: This Girl was Confused When a Man With One Leg Step Onto a Treadmill. What Happens Next Makes Her Jaw Drop