McDonald’s has set out to debunk the endless disgusting rumors about the way its food is prepared by inviting a camera inside one of its food plants.

The decision is part of a new campaign called Our Food. Your Questions, in which questions from the public will be submitted and answered on Twitter and Facebook.

The chain has also begun addressing these rumors on its website.

First to be dispelled were the images and videos of “pink slime” chicken nuggets and burgers that stay intact for years, Daily Mail reports.

The burgers, the website says, stay together because the food has dehydrated and will not form mold without moisture.

And while McDonald’s confesses that something akin to pink slime was used in its burgers for seven years, that practice has ceased and the slime was never included in its chicken nuggets, as allegations imply.

McDonald’s even posted an infographic detailing each step in the chicken nugget-making process. 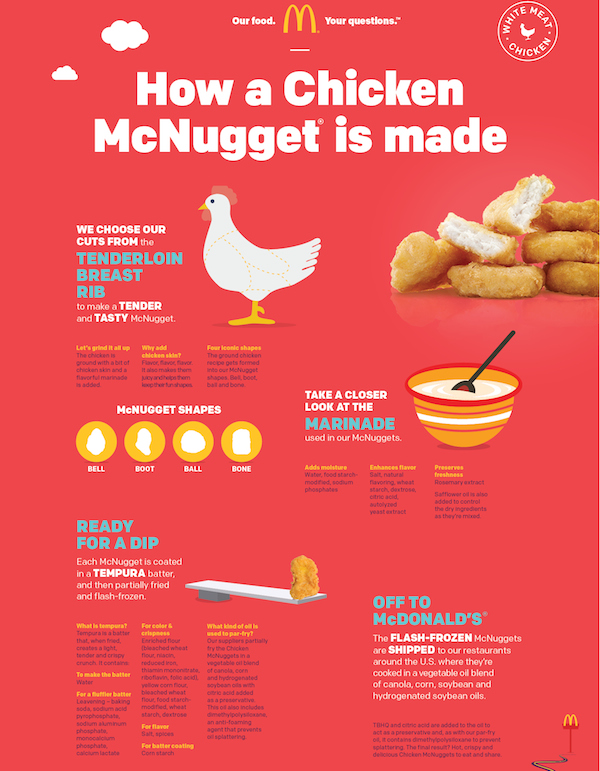 We’ve seen the photo of ‘pink goop’ or ‘pink slime’ in association with McDonald’s. Let’s set the record straight: this image in connection with McDonald’s is a myth. In fact, we don’t know where it came from, but it’s not our food.

The photo is not a representation of how we create our Chicken McNuggets, or for that matter, any item on our menu.

McDonald’s does, however, admit that a chemical used to make yoga mats is also an ingredient in its buns and rolls.

There are varied uses for azodicarbonamide, including in some non-food products, such as yoga mats. As a result, some people have suggested our food contains rubber or plastic, or that the ingredient is unsafe. It’s simply not the case.

Think of salt: the salt you use in your food at home is a variation of the salt you may use to de-ice your sidewalk. The same is true of ADA — it can be used in different ways.

The chain didn’t bother trying to fool anybody when it addressed hormones, saying that most of the cows used are given growth hormones.

The ad campaign promises to discuss any chemicals rumored to be used in McDonald’s items and dispel any concerns, no matter how ridiculous they may seem.

Previous Post: When You Swim With the Jellyfish, Things Get Magical
Next Post: The Next Time Someone Tells You That Immigrants Are Ruining Our Country, Show Them This