National LGBT organizations are quickly distancing themselves from Massachusetts Rep. Barney Frank’s assertion that the Log Cabin Republicans — a group for gay Republicans — have modeled themselves after “Uncle Tom.”

Frank is scheduled to address the Democratic National Convention sometime in the 5 p.m. hour.

The retiring out gay representative first made the racially charged comments on Michelangelo Signorile’s SiriusXM radio show. He then doubled down on it this afternoon, repeating the line to the 500 members of the convention’s LGBT Caucus, at a meeting where the chair of the Democratic National Committee, Rep. Debbie Wasserman-Schultz, later spoke.

“When they tell us that they’re happy to be Republicans because they’re getting acceptance and civility, I gotta say that I am again inclined to think that they’re called the Log Cabin club because their role model is Uncle Tom,” Frank said as DNC treasurer Andrew Tobias and others looked on at the conclusion of his speech to the group, prompting a mixed reaction from the crowd.

Uncle Tom, the name of the leading character in Harriet Beecher Stowe’s Uncle Tom’s Cabin, has become a pejorative term used to describe members of a minority group seen as helping in their group’s oppression.

Rea Carey, the executive director of the National Gay & Lesbian Task Force, went further, saying, “At the Task Force, we would never say something like that. There’s going to need to be some follow-up on the part of the [LGBT] caucus and the [Democratic] party today.”

Wasserman-Schultz would not comment on the remarks, only saying, “I think you need to ask Barney Frank.”

Mara Keisling, the head of the National Center for Transgender Equality, noting that she was not attending the convention in her professional capacity, said, “I think Barney Frank speaks for himself.”

She added, “It’s pretty clear to me which party is much, much, much better on LGBT equality, but I’m not going to cast aspersions on Log Cabin Republicans. Bless their hearts for trying.

In a statement, LCR executive director R. Clarke Cooper said, “We understand that Barney has earned his protected place within the Democrat Party by being their attack dog on gay rights issues, demonizing Republicans and undermining efforts at bipartisanship that would actually improve LGBT Americans lives. We expect this kind of bile from Barney, especially when it plays into the Obama campaign’s efforts to divide, distract and deceive the American people.”

As to the substantive reasons why HRC — a bipartisan organization that has endorsed President Obama’s re-election — disagrees with Frank’s comments, HRC’s Griffin said, “We need all fair-minded Americans to rally to the side of equality, and that most definitely includes Republicans. They provide a voice within the Republican Party that’s important.”

Even the head of National Stonewall Democrats, a group that Frank helped form, took issue with the comments.

Davis did hit back against LCR a bit, adding, “The truth is that they do play a certain role of kowtowing to the Republican Party in a way that borders on inappropriate itself.”

Multiple DNC spokespersons did not respond to requests for comment on the remarks. 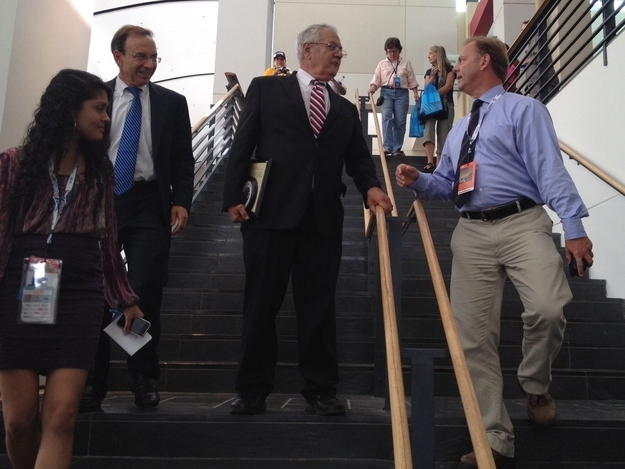 Rep. Barney Frank, center, speaks to a reporter after addressing the LGBT Caucus at the Democratic National Convention. Chris Geidner