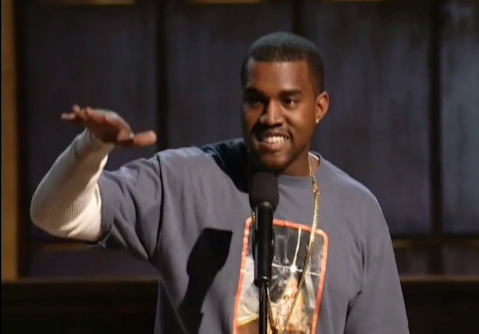 Before the “I Am A God” imagery, the cliques, the music video paintings, the 808 drums, and the shuttershades, there was a hungry young producer-turned-rapper performing spoken word at the Def Poetry Jam.

With each new Kanye album, wherein he pushes the boundaries of music and art that much more, it’s helpful to revisit this video of Kanye West’s appearance on HBO’s Def Poetry in 2004, to remind ourselves of just how far he’s come.

Mos Def introduces a then-largely unknown Kanye to the audience, “From Chicago, Illinois, please give it up for the future of hip hop, Kanye West!” Ok, so, first thing: can you even imagine introducing Kanye as a hometown rapper now? In 2004, he needed that context; now, he’s beyond a household name. Second, given what I know now, I get serious goosebumps watching Mos Def call him the “future of hip hop” to a crowd who barely recognizes him.

“This morning I spent a lot of time, like, trying to like pick out my outfit because I’m really into clothes,” he fake-stutters into the mic. “I’mma be the best dressed rapper out in the game, so, I got my…uh, ” he says, showing off the tags on his Adidas superstars.

Wearing loose, light denim jeans, Adidas with the tags on them, and a t-shirt layered over a graphic tee, he sets up his spoken word piece called “Self Conscious,” taken from his song “All Falls Down.”

4. “I’m so self conscious, that’s why you always see me with at least one of my watches / Rollies and Pashas done drove me crazy / I can’t even pronounce nothin’, ‘Pass that Ver-say-see!’”

6. “It seem we living the American Dream / but the people highest up got the lowest self-esteem.”

7. “Now, tell me that ain’t insecurre / The concept of school seems so securre / Sophomore, three yurrs, ain’t picked a carreerrr”

10. And here he is the next year, in 2005, with more recognition this time, and clearly, more elevated tastes.

11. “I had to make my own ambiance for me to feel comfortable, it really had nothing to do with the poem, whatsoever. I just thought it’d look good on TV.”

“I’m leaving you haters like when Shaq left the Lakers just to Heat it up.”

“Ralph Lauren was boring before I wore him.”

16. As well as the passion with which he speaks his truths, something we’ve seen him express tremendously more and more over the years.

He also tells an incredibly funny story about some advice his mama gave him (RIP).

Looking back on these makes appreciating where he is now that much more powerful, and sweet.