How A Teen Feminist Fell In Love With Henry Rollins 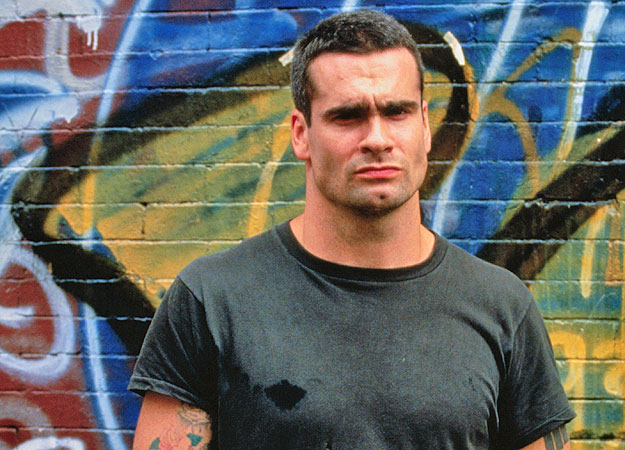 In a fair world, Henry Rollins would be a gym teacher. He’d be the eternally single and eternally disgruntled gym teacher who wore shorts all year round and worked primarily in boys’ military schools. Any line from the song “Low Self Opinion” off of the 1992 Rollins Band album End of Silence sounds like it could be shouted at a sulking 8th grade boy after he was picked last for a team in gym class. He wouldn’t be elevated to the punk icon status he’s held for over three decades, let alone the subversive teen idol for a girl entering high school, which is exactly how things worked out.

In that same hypothetical, fair world, a 14-year-old me wouldn’t have worn out her End of Silence cassette because she wouldn’t even own an End of Silence cassette. That’s because a younger me would have idolized Bratmobile’s Allison Wolfe, Bikini Kill’s Kathleen Hanna or any number of artists who played brash, angry punk that echoed my feminist sensibilities. Instead, I focused my fascination on a short, hypermasculine loudmouth who had issues with rage and even bigger issues with women. In the books he put out on his 2.13.61 label, Rollins’ anecdotes about women are generally confined to the nameless one that damaged him early on, ruining him for love entirely or casual sexual encounters with nameless women. Then there are the anecdotes about Hank throwing tantrums when women change their minds about sleeping with him, causing him to seek retribution by jerking off all over one woman’s doorway. This damning video pretty much says it all:

Looking back, it seems baffling that I would be attracted to such a misogynist, but at the time, but it also spoke to my own issues with women. Most of my youth was spent as a baseball card collecting tomboy who preferred the company of boys to girls. My much needed feminist awakening as well as a desire to develop meaningful friendships with other women didn’t happen till the end of high school. Had I experienced this shift earlier, I might not have been so dismissive of Hank’s troublesome representations of women.

My affinity for Rollins and his outstanding Napoleon complex was also the by-product of spending the summer before 9th grade at the Jersey Shore dating a guy who subsisted on a steady diet of Danzig, Dream Theater and Rollins Band. In the fall of ‘93, I saw Rollins Band play The Troc in Philly where he premiered a set of new songs that would later become the 1994 album Weight. It was loud, Rollins screamed a lot, and during the opening guitar riffs I was immediately knocked onto my ass by some dudes who couldn’t wait to get the mosh pit going. When the show was over, I was drenched in sweat, and frankly, I’m not sure how much of that sweat was my own. In short, I had a great time.

When my friends and I were standing outside the theater, waiting for our parents to pick us up, Henry walked out of the front door and stood by the curb. Although his IMDb page lists his height as 5’9”1/2, he seemed significantly shorter than my 5’8”. A friend of mine who had a large frame and was pushing six feet asked him for a hug in this uncharacteristically simpering tone, causing Henry to visibly cower in the shadow of this statuesque girl. He demurred the hug and offered us all handshakes. Then, Henry got into a rickety van and drove away, undoubtedly relieved to get the hell away from a gaggle of dorky high school girls. In our defense, given his considerable issues with women, he probably couldn’t wait to speed away from any gaggle of girls, dorky or not.

My fandom wasn’t just limited to his music. I bought his spoken word albums and his Talking From the Box VHS, which I practically memorized after repeated viewings.

At that time in my life, I thought his various books of “poetry” were both brilliant and profound, and dare I say it, were probably the inspiration that got me to try my hand at writing. In hindsight, however, I’d really love to travel back in time and kick my own ass for spending my allowance money on poems where Rollins proclaimed that he had Jesus Christ in one testicle and Hitler in the other. Let’s face it, his little vignettes about junkies selling dead roaches tied to tiny crucifixes on street corners weren’t getting me ready for the SAT’s.

I was pretty evangelical about my fandom. At one point, I bombed a World Civ quiz pretty hard and my teacher wrote “Less Rollins, more studying!” next to my abysmal grade. So, you can imagine my delight when Rollins started getting more TV and movie roles as various cops, prison guards and bodyguards. Hell, I was even on board when he played “Spider,” a mad scientist in 1995’s Johnny Mnemonic.

Many people referred to this facet of his career as “selling out,” but what’s someone supposed to do when they are given opportunities to work with David Lynch and Michael Mann? Say no? The GAP ads and Infiniti commercial voice-overs are a little harder to defend, but a guy can’t be expected to sleep in the shed behind Greg Ginn’s parent’s house or under a desk in the SST offices forever, can he?

Speaking of Ginn, Rollins Band was one of the gateway drugs to better music, namely the punk rock and hardcore of the early ’80s, like Minor Threat, The Misfits and Rollins’ own alma mater, Black Flag. The laughable lyrics in the lead-off single “Liar” didn’t bode well for the Weight album. If Black Flag taught us anything, besides the fact that Black Flag is awesome, it’s that Rollins is better used under someone else’s musical direction. The entire Rollins Band catalog certainly doesn’t hold up against Black Flag’s raw brutality, and it doesn’t age as well, either. Still, even well into my 30s, I can’t help being a Henry Rollins fan. He’s usually not the smartest guy in the room. He’s usually not the biggest guy in the room, but he’s probably the loudest guy in the room and he milks that for all he can.

To this day, every time Hank pops up in a voice-over spot, random cable talking head gig, or supporting role, the 14-year-old in me gets pretty excited. Actually, the present day me gets a little giddy too.

Maggie Serota is the co-host the Low Times podcast. She has also written for the Onion A.V. Club, Vice and Black Book.