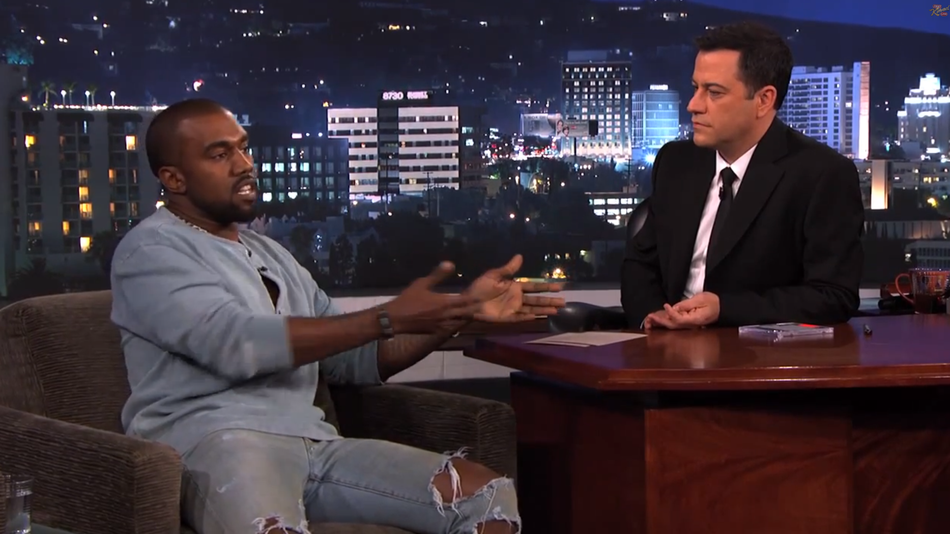 Calm down, Internet — the feud between Jimmy Kimmel and Kanye West has ended. And, thankfully, it wasn’t just a big publicity stunt. Yeezus himself appeared on Kimmel’s late night talk show Wednesday to clear the air after things got kind of intense on Twitter.

It all began with a typical Kanye West interview on BBC, which Kimmel then spoofed on his show. The spoof led West to wage an all out 140-charactered caps-lock war against the comedian. Kimmel jabbed right back with some quips. (Check out the whole story here.)

Wednesday’s interview/apology seemed like an honest and genuine conversation between the two men. They even shared an awkward embrace that passes for a hug in television world. But we would like to know who extended the olive branch first — our money is on Kimmel — and whether that was the reason behind West deleting his string of aggressive tweets.

During the segment, Kimmel seemed nervous and West tottered from ambivalent to intensely passionate (but, to be fair, he usually does).

They both insisted that the whole fight was not a publicity stunt, with West adding he “has never done a publicity stunt in [his] life.” Kimmel also told West he never thought the sketch would be considered offensive, especially because he’s done the same thing to other celebrities.

The most quote-friendly moments came when Kimmel stopped trying to apologize and let West speak his mind. It turned into an epic rant, with West discussing his girlfriend Kim Kardashian’s inability to receive a star on the Hollywood Walk of Fame, the status of black musicians and his troubles breaking into the fashion world.

“I’m a creative genius, and there’s no other way to word it,” he told Kimmel. “I know you’re not supposed to say that about yourself. I say things the wrong way a lot of times, but the intention is always positive. I want to help the world. I want to make peoples’ lives easier.”

He continued: “I stood up to drug dealers in Chicago and said, ‘You can’t have my publishing, come and kill me. Do whatever you’re gonna do, but you’re not gonna bully me. You’re not gonna stop me.’ Because my mother made me believe in myself!”

Watch the full interview below:

Previous Post: What do Cats and Pears Have in Common?
Next Post: WATCH: This Super Shotgun Slug Will Pierce ANYTHING!