Community Post: Why An Expensive Dress Is No Reward For Weight Loss 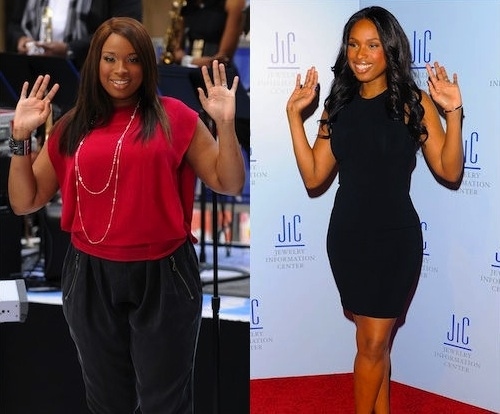 The side-by-side “before and after” photo is a basic tenet of celebrity journalism and countless weight-loss infomercials: inspiration by comparison. This week alone, Life & Style says Kim Kardashian is losing “15 pounds for Kanye”; OK! tells readers they can “slim down” if they “steal [stars’] diets”; and Us Weekly covers Jessica Simpson’s “$4 million deal to lose the baby weight.” It’s easy to see why the formula works: the “after” photo marks a nice, neat, happy ending for both the celebrity and the public. The final result becomes more important than the process, obscuring the celebs’ hard work but vastly improving their images.

In a December 2011 Weight Watchers commercial featuring Jennifer Hudson, the newly svelte singer performs alongside footage of herself circa 2004. Past and present Jennifers duet on Whitney Houston’s “I Believe in You and Me,” a technological feat that Gawker called “unsettling” and that Hudson admitted “freaks out” her family. Was the commercial a bit creepy? Perhaps. But Jennifer Hudson singing to her former, larger self, looking her up and down with disdain, was simply the “before and after” conceit in motion, a celebration of her journey from There to Here.

Hudson chronicles her experience in her book I Got This. Part autobiography, part Weight Watchers testimonial, it features platitudes like, “I’m telling you the absolute truth when I say that I genuinely loved my body — fat, thin, and everywhere in between.” But when Hudson’s Weight Watchers commercial first aired, I couldn’t imagine having any love for my own body. I had been trying to get rid of the Freshman 15 — and Sophomore 15 — since graduation, the latest battle in a long war against my body’s natural curves. (I’d longed to be skinny since a fellow nine-year-old at summer camp refused to share her clothes, for fear of me “stretching them out.”) I deeply envied my naturally slim friends, whose trips to the gym were more novel than necessary, who ate whatever — and whenever — they wanted. For formals and parties, they slipped into form-fitting dresses effortlessly, never bound by Spanx as I often was.

My weight-loss goal had nothing to do with improving my health or hitting a certain number on a scale; instead, I longed to have the carefree attitudes of my friends with the physique to match. It may sound superficial, but most of all, I wanted to rock an Herve Leger dress. The skintight bandage dresses are all about displaying a woman’s curves, their brazen simplicity a far cry from the creatively draped, oversized garments I wore to hide my shape. My clothes were meant to draw attention away from my body, not toward it. I gave as much thought to how I’d slim down enough to rock a Leger dress as I did to how I’d afford one of the exorbitantly-priced pieces — which is to say, almost none — but I dreamed of it nonetheless. 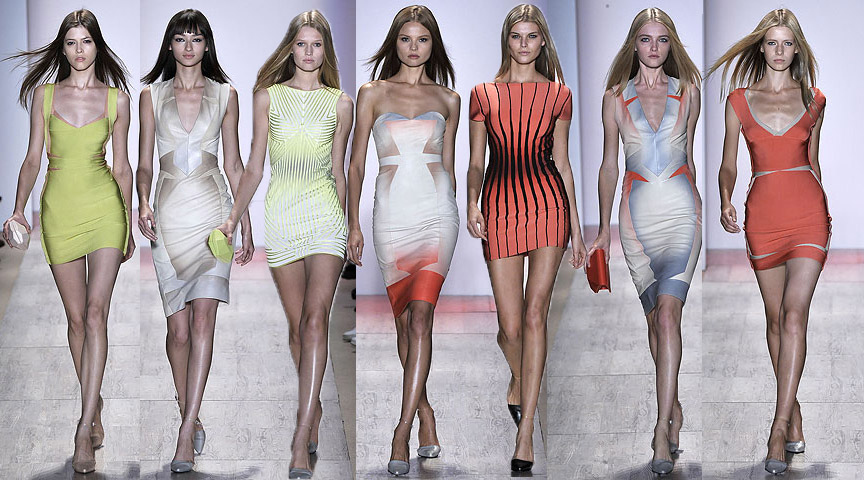 Sensing my frustration with idly running on the treadmill day after day, last summer a friend invited me to a spin class called Soulcycle. The thought of exercising in a room full of lithe, Lululemon-clad Manhattanites was horrifying — until I learned that, at this particular studio, the lights were kept low and music blared for the whole 45 minutes. The class was more like a dance party than a workout and, without the usual gym-induced dread, I could let loose on the bike. I got hooked on the push-pull of the pedals and on the way I felt after each ride — powerful, confident, capable. In a word, badass.

It wasn’t long until I started picking bikes in very front row of the room, adding yoga to my routine and eating more healthily; food became a source of much-needed energy rather than a cure for boredom or stress. Spending so much time around healthy, motivated people eventually turned me into one of them. It was an unconscious shift with a huge payoff: I’ve lost over 30 pounds this year. Once I noticed my body beginning to change, I simply tried to build on my own feeling of momentum; “I’ve done it before, I can do it again” became my mantra when getting ready for a workout or trying to resist a side of fries. Whatever I was doing was working; I tried not to overanalyze things. The Leger dress never crossed my mind.

Then, a few weeks ago, I got an email alert from a popular e-commerce site, advertising a sale on Herve Leger dresses. Even though the dresses’ fashion moment has definitely passed, I decided I owed it to myself to at least try one on as a sort of sartorial victory lap. But when the dress arrived, I was disappointed. I don’t know exactly what I’d been expecting, but there were no sparklers or confetti when I opened the box, no round of applause when I zipped up the dress. It was just a little black tank dress, not unlike others in my closet. In fact, it was a bit loose around the waist. So why didn’t this feel like a triumph?

While I stuffed the dress into its garment bag and filled out the return label, I thought about the emptiness of the experience. I had been waiting for my “after” moment, my big reveal, for as long as I could remember. But I already had the confidence I thought the dress would bring me; the hours of spinning and the slow descent of the number on my scale had changed the way I thought about myself. I had conflated my desire for a better, healthier body with my fashion-crush on Herve Leger’s dresses and, now that I had the former, the dress just didn’t matter.

Unless you’re Jennifer Hudson, Jessica Simpson or any of the countless celebs who score weight-loss endorsement deals, there is no such thing as an “after” moment. There’s no stylist on hand to fit you in smaller-sized clothes, for one thing. I still often wear items a few sizes too large for me — one can’t rebuild a wardrobe in a day! — and sometimes wish for a big red-carpet reveal. Yet I have small victories every day: realizing that all of my rings fit a little looser, or changing in the locker room of the gym instead of a bathroom stall. Rather than seeing myself as a “before” or “after,” I prefer to think of myself as perpetually in the “during” stage, with the constant ability to change, foster my confidence and maybe, someday, find the perfect LBD.

Previous Post: If You Can’t Handle a Ferrari, Don’t Bother Test Driving One
Next Post: Living With Lumia: Day 2, The Story of Apps