Aboard the ghost ship abandoned off the Italian coast 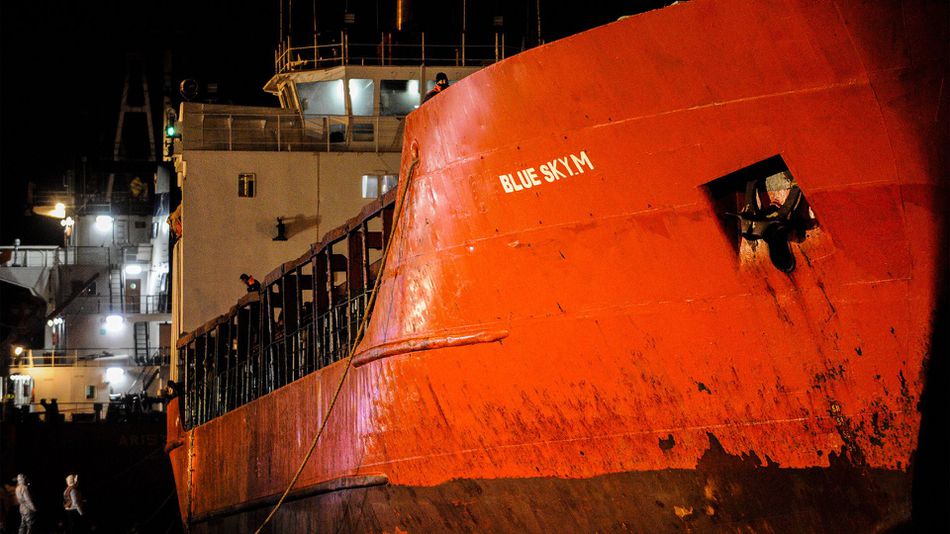 The Moldovan-flagged ship Blue SKy M. is docked early on Decembre 31, 2014 in the port of Gallipoli, in southeastern of Italy
Image: NUNZIO GIOVE/AFP/Getty Images

His cousins were among more than 3,000 migrants killed crossing the Mediterranean last year — the sea’s deadliest year on record.

Yet, like so many before him, Jawabrah decided he’d risk dying at sea for the chance to get his family a better life in Europe.

So the father of four boarded the Blue Sky M off the coast of the Turkish port city of Mersin on Dec. 21, having found the passage with the help of a human smuggler. More than 750 other people, many of them men, women and children from Syria, joined him in the aging cargo ship’s tomb-like hold.

For days, this would be their home as they undertook the perilous journey toward Europe.

“All the people were afraid,” he said. “I was looking at the kids and I put it in my mind that, if the ship sinks, I will carry two of them and try to save them.”

Despite his heroic ambitions, in truth the 38-year-old was full of fear as the ship creaked through choppy seas — in part because he was carrying a secret: Before the cargo ship had set out from Mersin, he had been tipped off that the smugglers would abandon ship before they reached Europe.

“The deal was the driver would call the Italian [authorities] and tell them to take us to land and run away,” said Jawabrah, who still decided to take his chances.

On New Year’s Eve, the captain and the crew did in fact ditch the vessel, leaving the “ghost ship” adrift. But alerted by a distress call, Italian authorities eventually managed to bring the passengers to safety.

In this video, which Jawabrah recorded, the people in the hold can be heard singing and clapping to keep their spirits up as they awaited their uncertain rescue.

Just two days later, however, human smugglers abandoned another merchant ship in the Mediterranean, leaving 400 people — more than 70 of them children — to their fate at sea. The Sierra Leone-registered Ezadeen was eventually towed to the port of Corigliano Calabro in southern Italy.

Nearly four years of civil war has forced more than 3 million Syrians abroad. Most have poured into neighboring countries, where, after so much time, hospitality and resources are on the wane. The Islamic State’s rampage through Northern Iraq and siege of the Syrian town of Kobane displaced hundreds of thousands more. The United Nations has called it the worst refugee crisis since World War II.

To control the flood of migrants, countries bearing brunt of the crisis have implemented restrictions that make it harder for Syrians to live, work and even enter their territory.

Lebanon, a tiny country that has absorbed more than 1 million refugees that now account for 25 percent of its population, recently announced new visa requirements for Syrians. The barriers have in turn sent more refugees toward Europe.

In November alone, 3,000 Syrians made it to Italy by sea, according to the International Organization for Migration.

In Istanbul, smugglers hawk a range of illegal travel options to Europe to an endless stream of clients. And on Facebook, migrants swap information about favorable routes, smuggling prices and departing boats.

“If there is a legal way to go, everyone would choose that way,” said a 30-year-old Syrian smuggler on condition of anonymity. “But if there is no other choice, we smuggle them. And it’s dangerous. And sometimes they die.”

Syrian families have burned through thousands of dollars, pin-balling from country to country in search of a better life. One Syrian engineer with a wife and a baby still in Damascus shares a room with four other refugees in Istanbul as he looks for work and a pathway to Europe. A 27-year-old who made three failed attempts to cross into Europe, he has now run out of money and lives hand-to-mouth.

His roommate, who earns $500 a month in a Turkish factory, says he would take the first available ship to Europe if could save enough money. “We are dying already,” he said.

Like many others, Jawabrah had first tried to start over closer to home. But he says authorities in Saudi Arabia kicked him out of the country for his support of the Syrian revolution, and in Jordan he couldn’t earn enough money for the family to survive. With his options and savings dwindling, he finally decided to travel alone to Turkey to get smuggled to Europe. The trip cost him nearly all of his remaining savings which amounted to $6,000.

After the ordeal on the Blue Sky M, he has now reached Germany where he is applying for refugee status. Once more settled there, he plans to apply for his wife and children, who are still living in Jordan, to join him.

“The only way to save my family is to get smuggled to Europe and then bring them there,” said Jawabrah

Previous Post: Picture of the Day: The Keel Walk
Next Post: Don’t Wait For the Uprising, Stop Abusing Robots Now