25 Sharks Responsible For The Most Human Incidents

Sharks are not man eating machines. Please keep this in mind when reading this post. However, some sharks (whether because they confused a human with a seal, or because the human provoked the shark, etc) have attacked and even killed some humans. Here are the top 25 sharks responsible for the most human incidents based of the ISFA (International Shark Attack File). 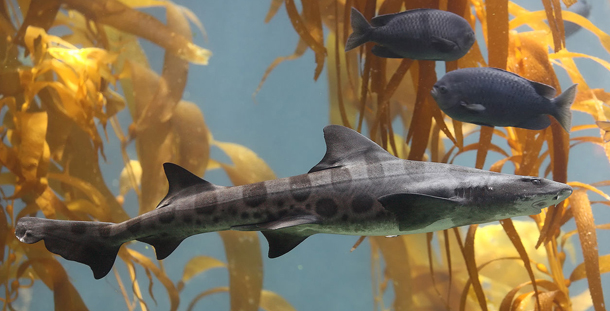 en.wikipedia.org The leopard shark (Triakis semifasciata) is a species of houndshark, in the family Triakidae. It measures about 1.2-1.5 m (3.9-4.9 ft) long and is immediately identifiable by the striking pattern of black saddle-like markings and large spots over its back. Though not harmful to humans, the leopard shark is responsible for two incidents (none of which were fatal). 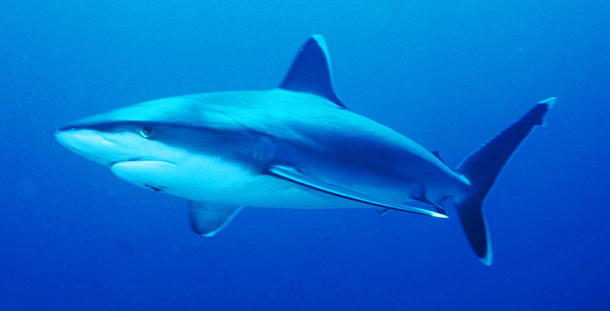 en.wikipedia.org An aggressive, powerful apex predator, the silvertip shark has a broad diet that includes bony fishes, as well as eagle rays, smaller sharks, and cephalopods. Though considered dangerous to humans, the silvertip shark only has four incidents to its name. 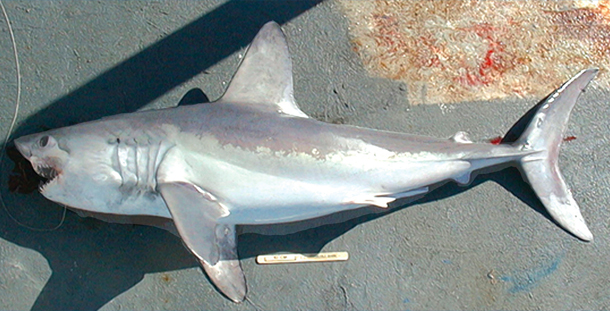 en.wikipedia.org The porbeagle (Lamna nasus) is a species of mackerel shark in the family Lamnidae, distributed widely in the cold and temperate marine waters of the North Atlantic and Southern Hemisphere. An opportunistic feeder, the porbeagle shark preys mainly on bony fishes and cephalopods. Only five incidents have been attributed to the porbeagle with none being fatal. 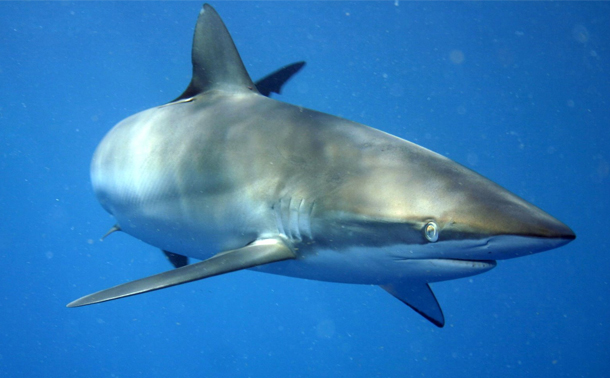 en.wikipedia.org The silky shark is a large yet slim oceanic shark that features dusky fin tips and a white band on its flank. When this shark reaches its 7th year, its length is already about 10 feet. It is found near continental and insular shelves at a depth of 1,640 feet and preys on pelagic and inshore fishes. According to ISFA, the Silky Shark has had 6 human incidents. However, none of them were fatal. 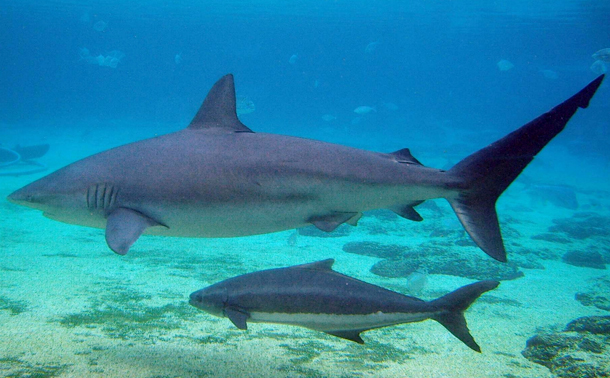 en.wikipedia.org This shark is a large gray shark that has a rounded and short snout. Like the Caribbean reef shark it also has no markings on its fins. Its color ranges from gray to bluish gray and can reach lengths of up to 11.9 feet (3.62712m). Found on continental and insular shelves, this shark is migratory and according to ISFA, has had 6 total incidents with humans from 1581 – 2011. One of these being fatal and unprovoked. 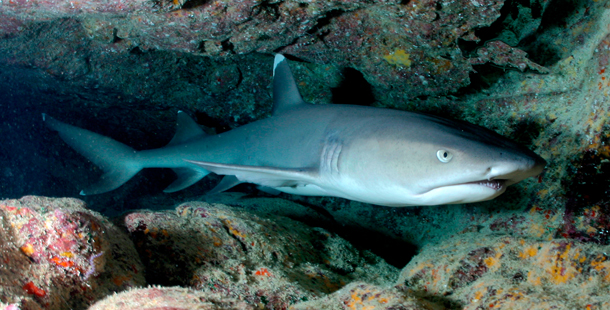 en.wikipedia.org The White tip reef shark (Triaenodon obesus) is a requiem shark in the family Carcharhinidae and the only member of its genus. The white tip reef shark is a small shark which usually doesn’t exceed 5.2 ft. (1.6 m) in length and are recognizable by their slender bodies, short but broad heads, tubular skin flaps beside their nostrils, oval eyes with vertical pupils, and white-tipped dorsal and caudal fins. Though normally not aggressive towards humans, the white tip reef shark has seven human incidents attributed to it’s name. None fatal. 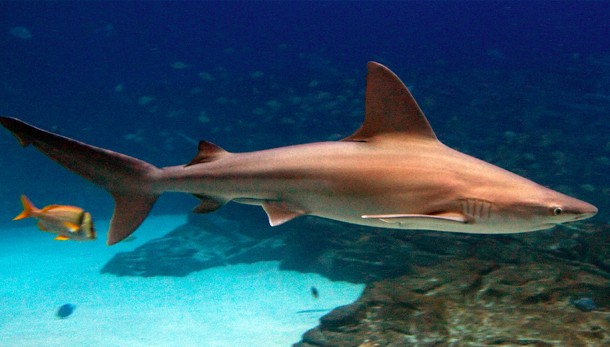 en.wikipedia.org Also known as the “Brown shark”, the Sandbar shark is one of the biggest coastal sharks in the world with females growing up to 2-2.5 m (6.6-8.2 ft) and males growing up to 1.8 m (5.9 ft).Surprisingly, this shark only has eight humans incidents attributed to it’s name with non being fatal according to the ISFA report. 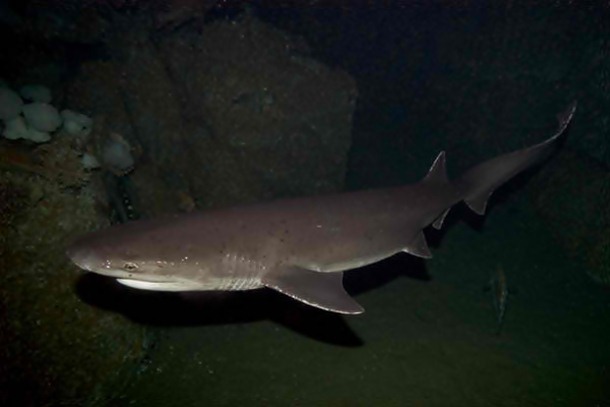 en.wikipedia.org This small eyed shark has seven gill slits and can grow by up to 9.45 feet. It lives on continental shelves or shallow bays and preys on other sharks and bony fishes. It has nine human incidents attributed to its name but none fatal. 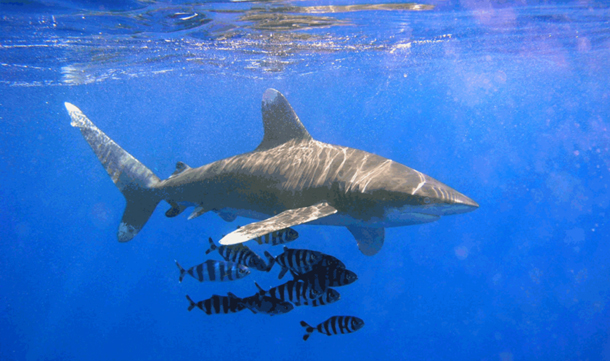 en.wikipedia.org This large shark has large rounded white-tipped fins and high rounded first dorsal fin. It is gray bronze above and white below, and features white mottling on its dorsal fins. This shark is occasionally coastal but is naturally epipelagic and oceanic. It lives in tropical and warm seas and feeds on tuna, barracuda and marlin. Though ISFA has recorded 14 human incidents (with three fatalities), the Oceanic whitetip has been described as “the most dangerous of all sharks” with the suspicion that whitetips are responsible for many fatal attacks on humans as a result of predation on survivors of shipwrecks or downed aircraft. These reports however are not included in reports and as such are not counted towards the sharks’ incident count. 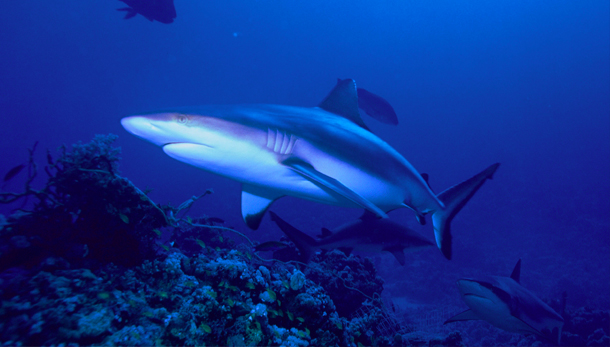 en.wikipedia.org Characterized by its long and broadly rounded snout and black edged caudal fin, the gray reef shark is gray to black in color and lives on coral reefs in the deepest areas of the open sea, particularly in the Western Pacific and Indian Oceans. It’s responsible for 16 human incidents but none were fatal.

en.wikipedia.org The spinner shark is a long and slender shark that has a pointed snout. Its body ranges from gray to bronze above and white on its flank and has a narrower jaw compared with other sharks. This guy is responsible for 17 human incidents but surprisingly no casualties according to
ISFA. 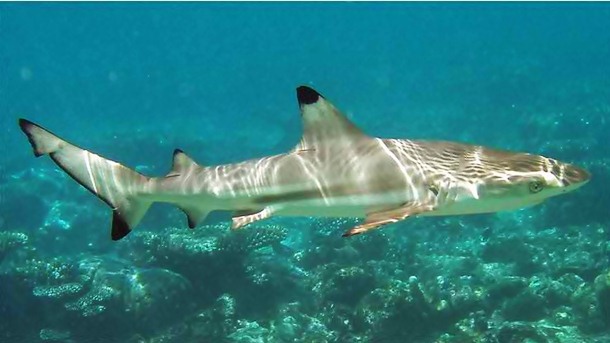 en.wikipedia.org This brownish gray shark is stocky and has a rounded, short snout. It can reach a maximum length of about 5.25 feet (160 centimeters) and has 21 incidents attributed to its name, but none are fatal. 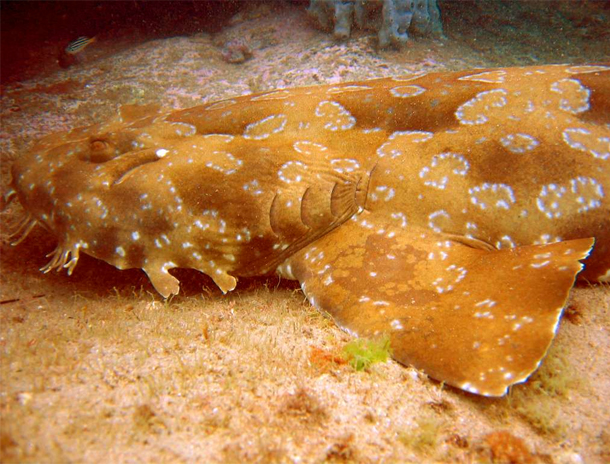 en.wikipedia.org The spotted wobbegong is a squat-bodied shark that is best known for its camouflaging abilities. It has enlarged and very sharp teeth and lives in the tropical inshore reefs of northern Australia. This shark is also nocturnal and is typically unaggressive unless it is provoked. However, it has been responsible for 22 recorded incidents with humans. None fatal. 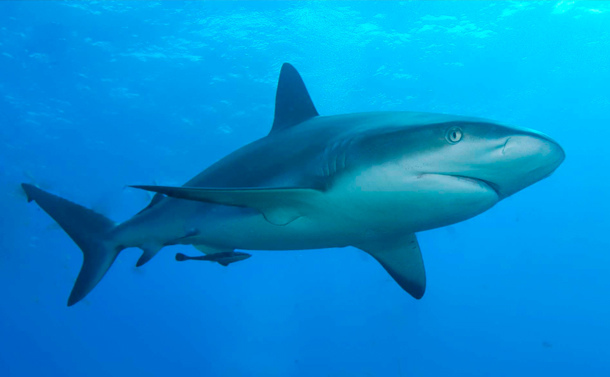 en.wikipedia.org The Caribbean reef shark is a large shark that has a bluntly rounded snout. Unlike other sharks, it has no prominent markings on its fins. It can reach lengths of 6.5 feet to 9 feet and has serrated teeth in both jaws. A tropical inshore shark, it is often found on coral reefs and is known to make close passes at divers. According to ISFA, it’s responsible for 27 incidents. None fatal. 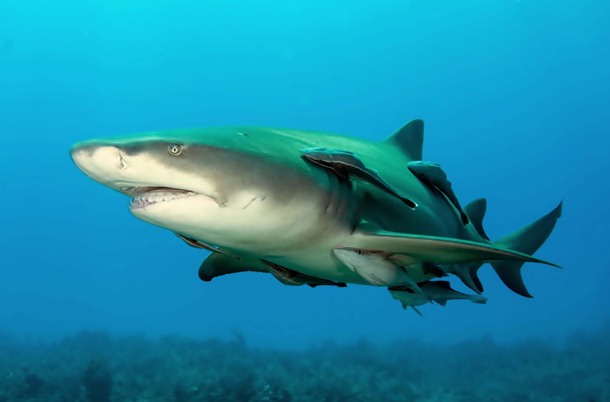 en.wikipedia.org A short-nosed yellowish shark, the lemon shark is dark brown, yellowish brown or olive above and yellowish below. It is naturally an inshore species that occasionally enters fresh water and feeds on bony fishes, small sharks, molluscs, crustaceans and sea birds. Because it is nocturnal, it is active at night and has been involved in some unprovoked incidents in Texas, South Carolina and Florida with a total of 29 incidents. 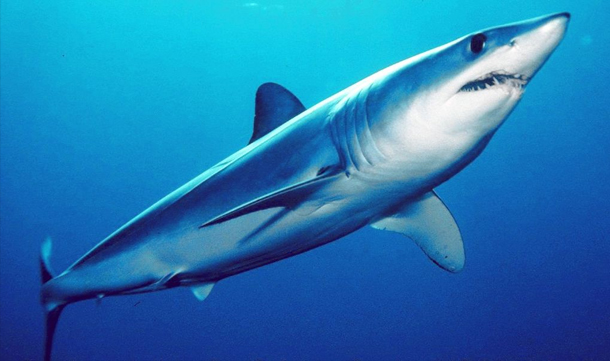 en.wikipedia.org The shortfin mako shark is characterized by its conical snout, large crescent caudal fin and long caudal keel. It is normally metallic blue or dark gray and grows up to 12.9 feet. The teeth of this shark are large awl-shaped and are non-serrated. It’s responsible for 33 human incidents, two of which were fatal. 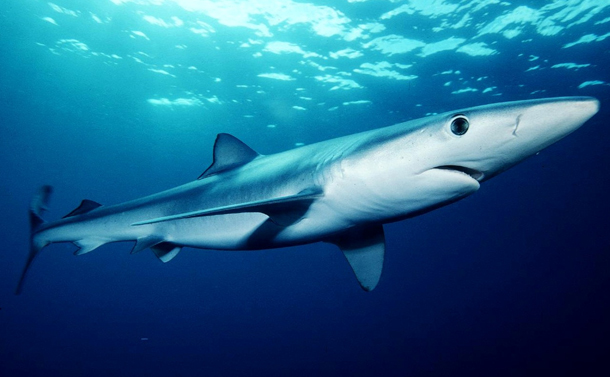 en.wikipedia.org The blue shark is a blue-colored shark that is known for its very long pectoral fins and long snout. It grows up to 10.6 feet and has serrated and slightly curved teeth. This shark is often found in waters as warm as 25 degrees Celsius. It feeds on small schooling fishes and is known to be responsible for several human incidents, 34 to be exact, 4 of which were fatal. 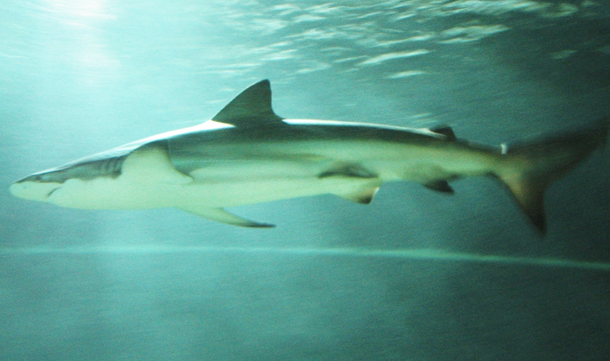 en.wikipedia.org The narrowtooth AKA Bronze whaler are large sharks with blunt, broad snouts, narrow bent cusps on the upper teeth, and no interdorsal ridges. They can reach a maximum length of 3.25 m (10.6 feet) and weigh a maximum of 305 kg (6672.41 lbs). According to ISFA, they are responsible for 36 incidents involving humans, one of which was fatal. 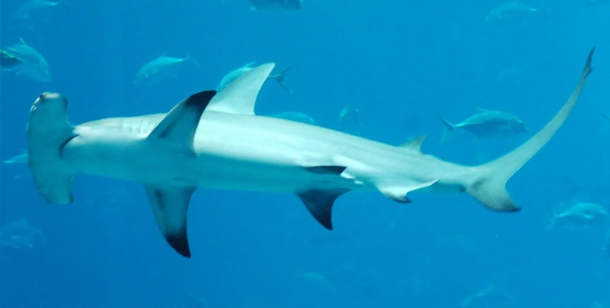 en.wikipedia.org This shark has a head that looks pretty much like a hammerhead (from where it gets its name). Hammerheads belong to the shark family Sphyrnidae and unlike other sharks, swim in a school during the day. 37 incidents have been attributed to the hammerhead however, no fatalities have been recorded. 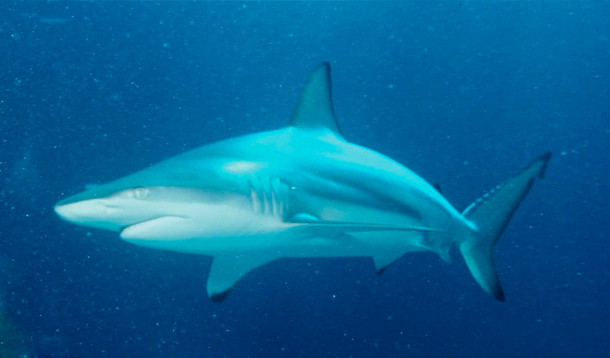 en.wikipedia.org The Blacktip shark gets its name from the black tip coloration of its fins. It is basically an in shore shark that dwells in shallow coastal waters and preys on schooling fish, squid and small sharks. Its responsible for 45 human incidents, with one of the cases ending up as a fatality. 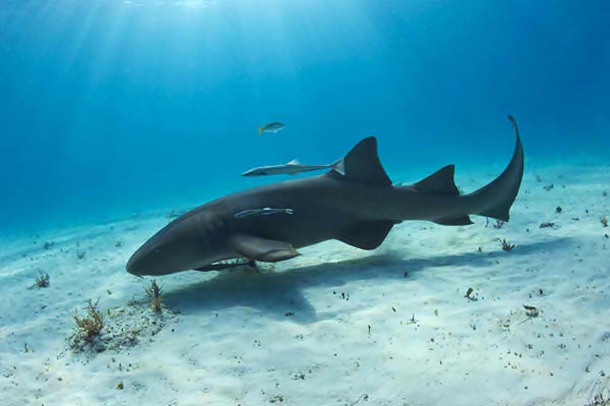 en.wikipedia.org This large-headed shark has a yellow-brown or fully brown body and takes a longer time to mature compared to other sharks. It has small teeth and has a large cusp flanked on each side of its jaws. This shark is an inshore shark that lives on the coral reefs of Brazil and Mexico. Though its responsible for 54 incidents with humans, none of them have been fatal. 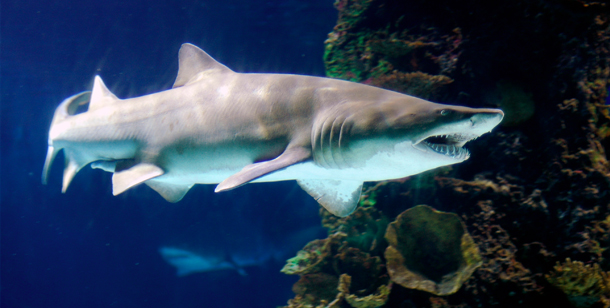 en.wikipedia.org More commonly known as the raggedtooth shark, the sand tiger is a stocky shark that is known to have protruding teeth. The color of its body ranges from bronze to gray above and white below. It often swims with its teeth visible and is generally placid. However, it has been responsible for 77 incidents, one of which was fatal. 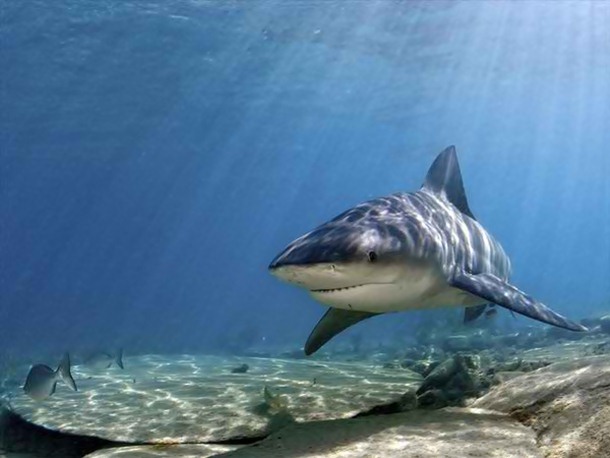 en.wikipedia.org This shark is a stocky gray shark characterized by its bluntly rounded snout. Its colour is gray and its fin tips are dusky. Unlike other shark species, it is normally found close to the shore, especially in tropical and subtropical shallow coastal waters. It feeds primarily on bony fishes though it also eats smaller sharks, turtles and birds. This guy is one of the most dangerous sharks out there with 139 incidents incidents to his name, 26 of which were fatal. 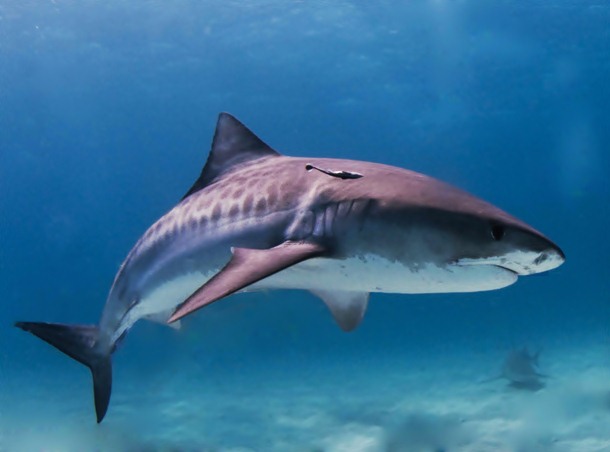 en.wikipedia.org This large shark comes in various colors. They normally reach a length of at least 12.1 feet and have identical teeth in both jaws. This coastal species of shark can adapt well with a broad range of marine habitats and consumes just about anything that can fit in between its jaws. Boasting of 169 incidents (29 of which were fatal), this is one shark you don’t want to mess with. 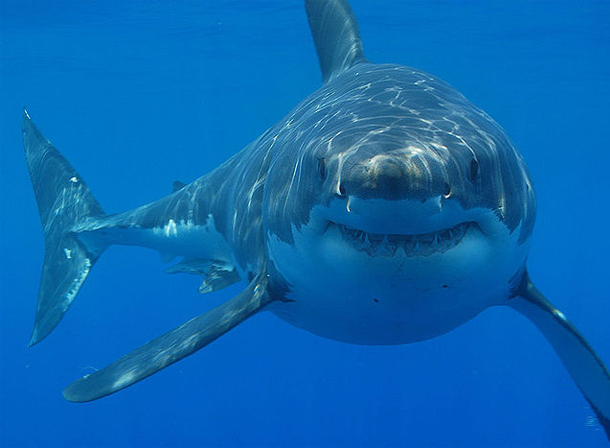 en.wikipedia.org The Great white shark is a type of shark characterized by its heavy spindle-shaped body. It has a caudal keel, lunate caudal fin and conical snout; sporting colors from slate brown to white. Known as the most formidable of all the sharks, this shark is often found off oceanic islands, especially in temperate and tropical waters. Not surprising, according to ISFA the Great white is responsible for the most incidents involving humans with 431, 69 of which were fatal. Did any of the sharks on the list surprise you? If so, what do you think of the 25 Most Dangerous Dog Breeds?