What the Internet Was Doing During the State of the Union 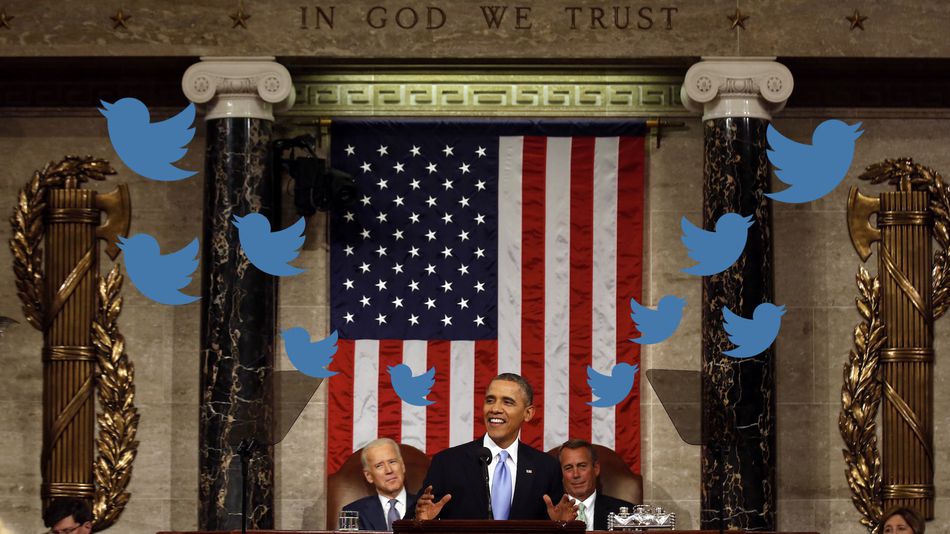 In an unofficial vote, Congress and the American people have decided that it’s okay to use the Internet while the president is speaking.

On Twitter, users sent 1.7 million tweets related to the President Barack Obama’s State of the Union address during the 70-minute span on Tuesday night, encompassing Obama’s remarks and Rep. Cathy McMorris Rodgers’ official Republican response. Even members of Congress were not above fiddling with smartphones during the speech; they contributed 750 tweets to the chorus — 0.04% of the 1.7 million total.

“Fairness,” “healthcare” and “defense” were among the most hashtagged terms related to the State of the Union. Twitter released the following interactive graphic to track how the online conversation progressed; it links buzzwords with the actual words Obama spoke during the address.

A pop culture reference outperformed his remarks about healthcare and raising the minimum wage for federal government workers: The conversation peaked at more than 33,000 tweets per minute when Obama made a quip about the TV show Mad Men.

The Mad Men reference came as Obama talked about gender inequality in the workplace. He argued that it’s unfair that, on average, women earn 77 cents for every dollar a man earns.

“This year, let’s all come together — Congress, the White House and businesses from Wall Street to Main Street — to give every woman the opportunity she deserves,” Obama said. “Because I firmly believe when women succeed, America succeeds.”

Meanwhile, Internet users also turned to Google during the speech for background information and answers to their burning questions. Here are some insights about popular State of the Union searches.

Appreciate what the President said tonight but I’m w/ those still asking, “where are the #jobs?” https://t.co/3Lbo4Ybug1

BONUS: Major Moments From Obama’s State of the Union Address

Previous Post: A Female Cop Is Seen Sitting On The Side Of An Overpass. When Drivers Take A Closer Look? Shocking!
Next Post: These Are The Hardest-Working People We Never Thank Enough. Some Celebrities Show Us How Itâ€™s Done.