Tyler, The Creator Doesn’t Need To Be Defensive On An LP As Good As “Wolf” 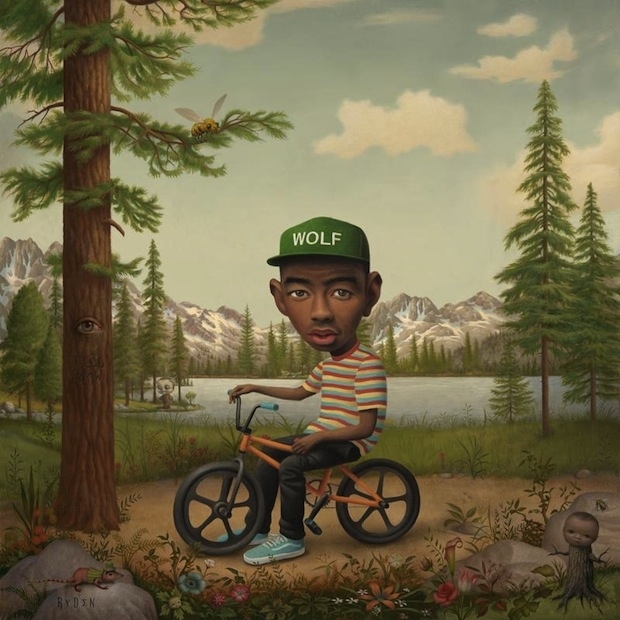 For someone who constantly says he doesn’t give a fuck, Wolf proves that Tyler, the Creator does, actually, give a lot of fucks. This is both good and bad. The good: The Odd Future leader, his own worst critic, constantly strives to advance his skills and his sound, and on this third album, he does. Wolf is intricate and layered, enveloping, surprising, and ambitious — the production is stellar. It’s also Tyler at his most honest and vulnerable. The bad: The punk rock, devil-may-care attitude that made Odd Future so dynamic and compelling in the first place is muted by a defensive tic and a hyperawareness of his critics.

We’ve seen this type of simultaneous rejection and obsession with one’s public perception before, from one of Tyler’s idols, Eminem — whose trajectory is one Tyler’s been following pretty closely. Eminem, who has been an enduring influence of the whole OF gang across their body of work, is all over this album. Bastard and Goblin had Tyler engaging in the same kind of juvenile, cartoony “shock tactics,” violent fantasies, and character work that made The Slim Shady LP such controversial fare.

Wolf borrows liberally from post-Slim Eminem — both rappers confronting their critics, agonizing about the realities of celebrity, how quickly life has changed, and whether they’re taken seriously. “Mothafuckas want me to come on their radio shows / Just to argue with ‘em ‘cause their ratings stink?” Em raps on “Kill You,” from The Marshall Mathers LP. Tyler feels similarly used on “Rusty”: “And MTV could suck my dick, and I ain’t even fucking playing / Bruh, they never played it, I just won shit for their fucking ratings.” Wolf is still dark, but now it’s largely about problems that the average kid listening can’t relate to. “Colossus” is instantly recognizable as an updated version of “Stan,” with Tyler deftly taking on the persona of a Supreme’d out bandwagoner. He both craves and shies away from the attention, perhaps because it reminds him too much of himself — of the Stan he was for personal heroes like Pharrell, who are now humanized as people he knows in real life.

And while Tyler may have famous friends and money now, on Wolf it’s clear that he’s hardly adjusted to it. He brings up the four-story house (with its eight flights of stairs) he bought his family over and over again. But this isn’t rap braggadocio, this is a 22-year-old in awe of what’s been happening to him.

Wolf may sound more mature on technical level — cinematic in scope and structure — but it doesn’t mean Tyler’s all grown up. It’s still very much an album made by a 21-year-old, about the awkwardness of dating and crushes (on, fittingly, a song called “Awkward”), and there’s a sweet innocence when he talks about girls he really likes (“Because holding your fingertips is golden”). He lets himself look dorky: “And making eye contact, I feel like the damn man / ‘Cause even though I am and get round of applauses / I’m insecure, then I start to think I don’t stand chance.” On “IFHY,” he expertly chronicles the rollercoaster of emotions and jealousies of young love: “Crazy who makes me the happiest / Can make me the saddest.” This is territory where Eminem never really let himself go, and it’s precisely why Tyler might be able to retain accessibility and closeness with his listeners. He’s speaking about a universal experience.

“Answer” and “Lone” are plain-spoken in their honesty, and all the more powerful for it. “Lone” meditates on the moments before his grandmother’s death, while “Answer” expounds on the “daddy issues” that Tyler’s addressed with more vitriol on Bastard. But this time it’s easier on the ears. 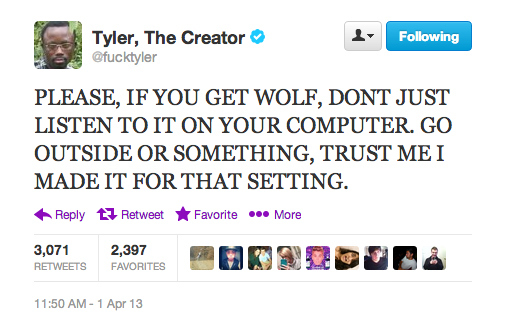 Tyler pays homage to his musical influences here — Stevie Wonder, the Neptunes, Roy Ayers — and makes music that sounds more like what he listens to on his own time. Wolf excels at capturing very specific emotions: dark, pounding keys on “Colossus,” and the sweet, jazzy, neo-soul of “Treehome95,” during which you can practically feel the wind in your hair, imagining riding a bike in summer. Tyler takes a backseat to Eyrkah Badu and Quadron’s Coco O., and it’s apparent that this might be where he’s the happiest, producing and setting up the stage for others to shine.

It’s not a coincidence that the record closes out with a track called “Lone” on an album called Wolf. Tyler is the face of a L.A. collective including at least 60 people, and he’s as boisterous and outrageous as they come. But he’s really always been an introvert, who still, after all this time, feels utterly alone in his head. His albums do a good job of trying to make sense of it all: “I started off with disposables, now I have an assortment / And I’m using the negatives to develop a portrait.” It’s a dazzling one. 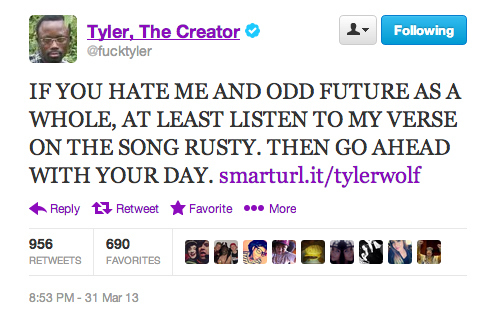 Previous Post: Another 10 Artistic Uses of Ordinary Things
Next Post: Take 5 seconds and let this 4-year-old tell you the cutest knock-knock joke you’ve ever heard