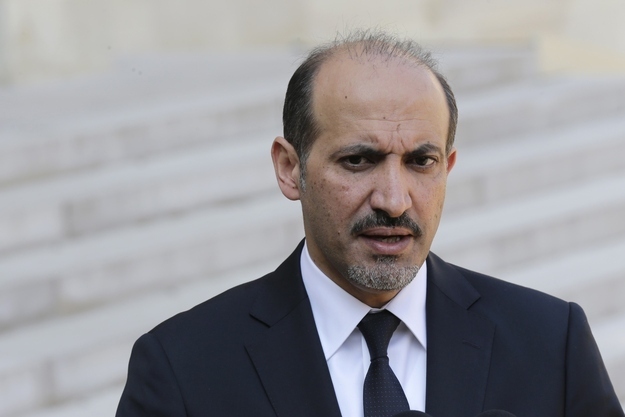 NEW YORK — The president of the main Western-backed Syrian opposition group said on Friday that he was “concerned” about a recent communiqué issued by rebel groups — some of which are part of the Free Syrian Army — that rejected the political opposition based in exile.

“Of course we are concerned about the fact that there are some of those who signed that communiqué are also members of the FSA,” said Syrian Coalition president Ahmad al-Jarba in a press conference in New York on Friday.

The communiqué, signed by over a dozen rebel groups, formally rejects the moderate political opposition based in Istanbul and backed by the West and the Gulf states. The communique calls for Islamic law in Syria and was signed by the al-Qaeda-linked Jabhat al-Nusra, as well as three groups that were up until now part of the Free Syrian Army.

Jarba said he “will be going back and meeting with some of those leaders to understand what happened. Have they really changed their alignment, their alliances? So this question will be investigated. Right now it’s not clear exactly what was intended by that communiqué.”

Jarba then changed tack from talking about the Islamist fighters siphoning influence away from his coalition and to foreign groups fighting in Syria.

“What we don’t understand and we would like the whole world to take a position is why no question has been raised about another extremist group inside Syria, and that is Hezbollah,” Jarba said, referring to the Iran-backed group. “We all know they have entered into Syria fighting with the dictator chemical weapons killer and the whole world is silent.”

Jarba also weighed in on the U.N. Security Council resolution that will be voted on on Friday, saying that his coalition found it “acceptable.”

“We would have loved to see a more clear resolution under article 7,” Jarba said, referring to a U.N. article that enshrines the possibility of measures including military action if the resolution’s terms are not fulfilled. “This has not happened though there is a reference that a future resolution would be taken under article 7.”

“We wanted a bit more than that, but we are happy with the current resolution, it is acceptable to us but it is important that the draft is not compromised,” Jarba said.

“We are happy that certain demands have been included that we wanted, like accountability — a demand of accountability for those who use chemical weapons to be brought to justice,” Jarba said.

Jarba also expressed skepticism over the apparent slight warming of relations between the U.S. and Iran this week, saying “We are not sure whether this is an improved relationship. What concerns us is that Iran will stop supporting criminals.”

Jarba’s spokesman Louay Safi said that the Syrian opposition would not accept Iran playing a role in proposed Geneva talks.

“Currently our position would be no, we’re not going to accept that,” Safi said. “Iran has first to force Hezbollah to leave Syria, remove its own forces and advisors, and has to stop supplying weapons to a bloody regime.”

Safi said the Iranians were “equally responsible” for the bloodshed in Syria as the Assad regime.

He said that Jarba, who had met with Secretary of State John Kerry this week as well as diplomats from Gulf states and with the British and French foreign ministers, had not met with President Obama during the United Nations General Assembly.

“Mr. Jarba will have to go back to Syria tomorrow immediately to deal with this situation,” Safi said, referring to the communiqué. “Now there will be no meeting between the two.”

He announced that the Syrian opposition will seek to take the Syrian government’s seat at the United Nations.

“We have already started the process,” Safi said. “We are seeking that.”

Previous Post: Report: Terminally ill Brittany Maynard of Oregon dies at
Next Post: ‘Officially the worst’: CNN asks if Ebola is ‘the ISIS of biological agents’