Rick Perry On Wendy Davis Being A Teen Mom: “Unfortunate She Didn’t Learn From Her Own Example” 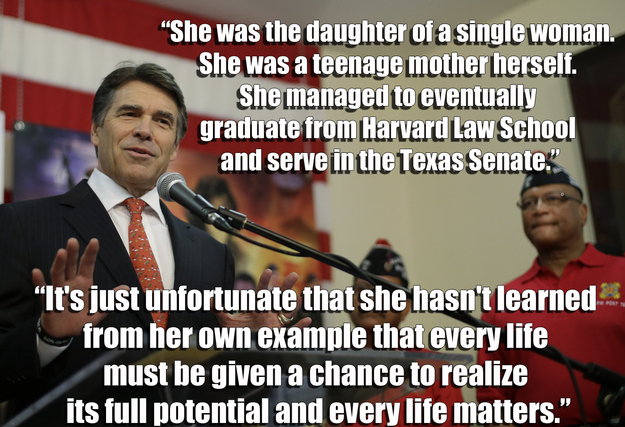 No life is trivial in God’s eyes. Who are we to say that children born into the worst of circumstances can’t grow to live successful lives? The woman who filibustered the Senate the other day was born into difficult circumstances. She was the daughter of a single woman. She was a teenage mother herself. She managed to eventually graduate from Harvard Law School and serve in the Texas Senate. It’s just unfortunate that she hasn’t learned from her own example that every life must be given a chance to realize its full potential and every life matters.

Perry also described Davis’ widely celebrated 13-hour filibuster on Tuesday as a “hijacking of the Democratic process.” Alluding to the newfound national support of Davis as a leader of the pro-choice movement, Perry said, “The louder they scream, the more we know that we are getting something done.”

Previous Post: A Kid Says Something To A Teacher That No One Should Have To Experience
Next Post: Duke University Fraternity Suspended After Asian-Themed #RacistRager