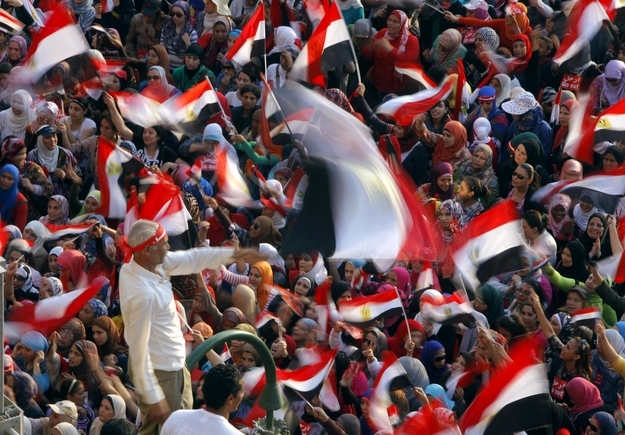 The hoards of protesters in Tahrir Square and beyond are going to have to wait at least a little longer to learn the fate of their country’s government. As the Egyptian Army’s 48-hour deadline came to a pass today without definitive action or intervention, the Egyptian Presidency issued a statement reaffirming President Morsi’s position that overturning the current government would undermine democracy in Egypt. Basically, Morsi isn’t (willingly) going anywhere at this time.

The Egyptian Presidency renews its adherence to the roadmap to which all national forces were invited for the sake of comprehensive national reconciliation which would meet the demands of people and accommodate all national, youth and political forces and which would defuse the political tension in Egypt now.

The Presidency affirms that overturning constitutional legitimacy threatens democracy by deviating from its right path, and threatens freedom of expression which Egypt enjoyed after the revolution. Legitimacy is the only guarantee for stability and confronting violence, vandalism, and breaking the law.

The Presidency holds responsible a number of political parties which previously boycotted all calls for dialogue and consensus, the last was this initiative which addresses all demands of the Egyptian street and prevents the nation’s sliding into political disputes which any Egyptian does not wish to see in his/her dear homeland. To protect the blood of Egyptians, the Presidency calls on all political and national forces to prioritize national interest above all other interests.

Everyone should be aware of an evident fact: the Egyptian people (both supporters and opponents) expressed themselves by taking to the streets in the past few days. Hundreds of thousands from both sides protested.

One of the mistakes I cannot accept -as the President of all Egyptians- is to side with one party over another, or to present the scene from one side only. To be fair, we need to listen to the voice of people in all squares.

The Egyptian Presidency adopts a clear and safe roadmap based on constitutional legitimacy which Egyptians built together. The roadmap includes the formation of an interim coalition government on the basis of national partnership to manage the rest of this phase until parliamentary elections within few months, or to agree on the person of the Prime Minister by all factions. This is our vision to move forward. Let the Egyptians express their opinion through the ballot box.

The other scenario which some are trying to impose on the Egyptian people is not agreed on by the masses who filled the streets. It would disrupt the institution building process which we started. Whoever thinks that Egypt can go backwards by destroying the legitimacy of the constitution and the revolution and imposing the legitimacy of force on this noble Egyptian nation which tasted freedom or would not pay its blood as a price for protecting it, is mistaken. The Egyptian people will hold on to peacefulness of their revolution.

Let us protect our peacefulness, our nation, and our revolution. 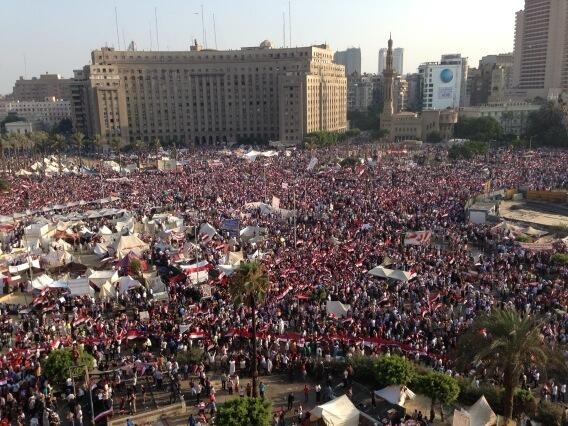 Tahrir Square in a frenzy today as anti-Morsi protesters await action from the government.

An aide to President Morsi posted a statement to government’s Foreign Relations Facebook page calling what’s happening in Egypt a military coup, stating “I am fully aware that these may be the last lines I get to post on this page.”

As I write these lines I am fully aware that these may be the last lines I get to post on this page.

For the sake of Egypt and for historical accuracy, let’s call what is happening by its real name: Military coup.

It has been two and a half years after a popular revolution against a dictatorship that had strangled and drained Egypt for 30 years.

That revolution restored a sense of hope and fired up Egyptians’ dreams of a future in which they could claim for themselves the same dignity that is every human being’s birthright.

On Januray 25 I stood in Tahrir square. My children stood in protest in Cairo and Alexandria. We stood ready to sacrifice for this revolution. When we did that, we did not support a revolution of elites. And we did not support a conditional democracy. We stood, and we still stand, for a very simple idea: given freedom, we Egyptians can build institutions that allow us to promote and choose among all the different visions for the country. We quickly discovered that almost none of the other actors were willing to extend that idea to include us.

You have heard much during the past 30 months about ikhwan excluding all others. I will not try to convince you otherwise today. Perhaps there will come a day when honest academics have the courage to examine the record.

Today only one thing matters. In this day and age no military coup can succeed in the face of sizeable popular force without considerable bloodshed. Who among you is ready to shoulder that blame?

I am fully aware of the Egyptian media that has already attempted to frame ikhwan for every act of violence that has taken place in Egypt since January 2011. I am sure that you are tempted to believe this. But it will not be easy.

There are still people in Egypt who believe in their right to make a democratic choice. Hundreds of thousands of them have gathered in support of democracy and the Presidency. And they will not leave in the face of this attack. To move them, there will have to be violence. It will either come from the army, the police, or the hired mercenaries. Either way there will be considerable bloodshed. And the message will resonate throughout the Muslim World loud and clear: democracy is not for Muslims.

I do not need to explain in detail the worldwide catastrophic ramifications of this message. In the last week there has been every attempt to issue a counter narrative that this is just scaremongering and that the crushing of Egypt’s nascent democracy can be managed. We no longer have the time to engage in frivolous academic back and forth. The audience that reads this page understands the price that the world continues to pay for the wars in Afghanistan and Iraq. Egypt is neither Afghanistan nor Iraq. Its symbolic weight and resulting impact is far more significant. Last night, demonstrators at Cairo University supporting the President were fired upon using automatic weapons. Twenty people died and hunderds were injured.
There are people in Egypt and around the world that continue to try to justify the calls for early presidential elections because of the large numbers of demonstrators and the validity of their grievances.

Let me be very clear. The protesters represent a wide spectrum of Egyptians and many of them have genuine, valid grievances. President Morsy’s approval rating is down.

Now let me be equally clear. Since January and again in the last couple of weeks the President has repeatedly called for national dialog. Equally repeatedly, the opposition refused to participate. Increasingly, the so-called liberals of Egypt escalated a rhetoric inviting the military to become the custodians of government in Egypt. The opposition has steadfastly declined every option that entails a return to the ballot box.

Yesterday, the President received an initiative from an alliance of parties supporting constitutional legitimacy. He discussed it with the Prime Minister and the Minister of Defense and all three of them agreed that it presented an excellent path for Egypt out of its current impasse. The initiative called for a full change of cabinet, a prime minister acceptable to all, changing the public prosecutor, agreement on constitutional amendments, and a reconciliation commission.

And let us also be clear. The President did not have to offer all these concessions. In a democracy, there are simple consequences for the situation we see in Egypt: the President loses the next election or his party gets penalized in the upcoming parliamentary elections. Anything else is mob rule.

In the last year we have been castigated by foreign governments, foreign media, and rights groups whenever our reforms in the areas of rights and freedoms did not keep pace with the ambitions of some or adhere exactly to the forms used in other cultures. The silence of all of those voices with an impending military coup is hypocritical and that hypocrisy will not be lost on a large swathe of Egyptians, Arabs and Muslims.

Many have seen fit in these last months to lecture us on how democracy is more than just the ballot box. That may indeed be true. But what is definitely true is that there is no democracy without the ballot box.

Muslim Brotherhood spokesman Gehad El-Haddad echoes the sentiments of the National Security Advisor, who is also his father.

There is a FULL MILITARY COUP under way now in #Egypt. Tanks hv started moving thru the streets. #Egypt #SaveEgypt

So if the road 2 change thru democracy & the ballot box get shuts by military muscle. What options r we inviting the ppl 2 take 4 change ? 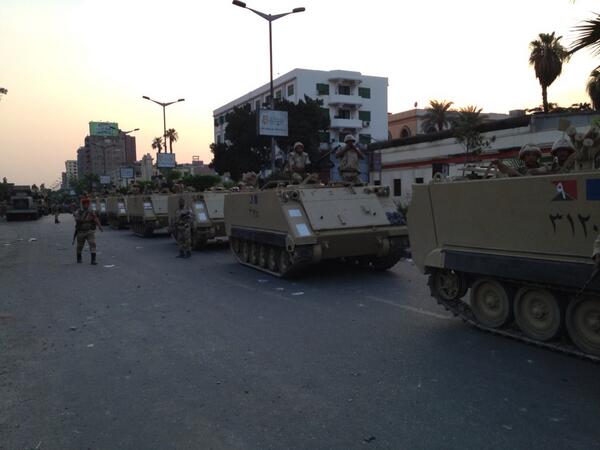 The Muslim Brotherhood And The Military Head For Showdown

Previous Post: Big Labor Goes To War With Cuomo
Next Post: What She Says About Drunk Driving Sounds Ridiculous At First. 0:45 Is When You Get It.