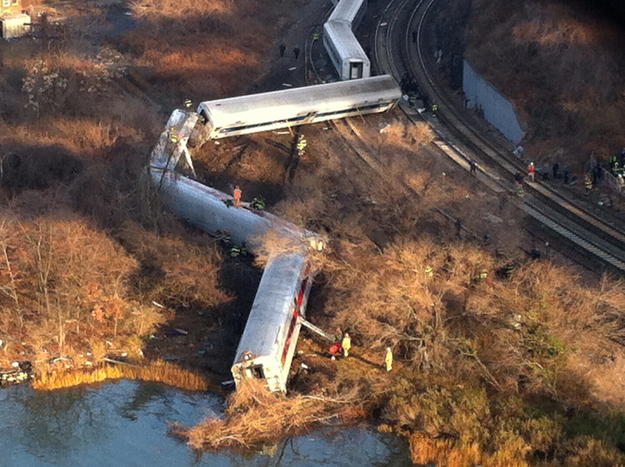 Cars from a Metro-North passenger train are scattered after the train derailed in the Bronx on Sunday. Edwin Valero/Associated Press

The black box has reportedly been recovered, as well as the engineer’s cell phone. The devices’s data will be analyzed to determine what caused the crash.

The engineer’s cell phone has been recovered and as part of our routine process, we will obtain the data from the forensic examination.

At a press conference on Monday, the National Transportation Safety Board announced that the train was traveling at 82 mph as it was entering a 30 mph curve.

“When I heard about the speed, I gulped,” said N.Y. Senator Chuck Schumer.

It is still too early to tell whether or not human error played a role in the deadly Metro North train derailment, the NTSB said.

The train, which was reported to have left Poughkeepsie at 5:54 a.m. and was due at Grand Central at 7:43 a.m., made nine earlier stops prior to the derailment with no brake issues.

The NTSB has said it will be looking at maintenance records as well as personnel records, and will be interviewing crew members over the next seven to ten days. The first interviews were conducted on Monday.

We began the interview with the engineer today and that, and other 3 crew interviews, will continue over the next few days.

The train was traveling from Poughkeepsie to Grand Central Station in New York City when all of the train’s seven cars derailed about 100 yards north of the Spuyten Duyvil train station in the Bronx at 7:20 a.m. 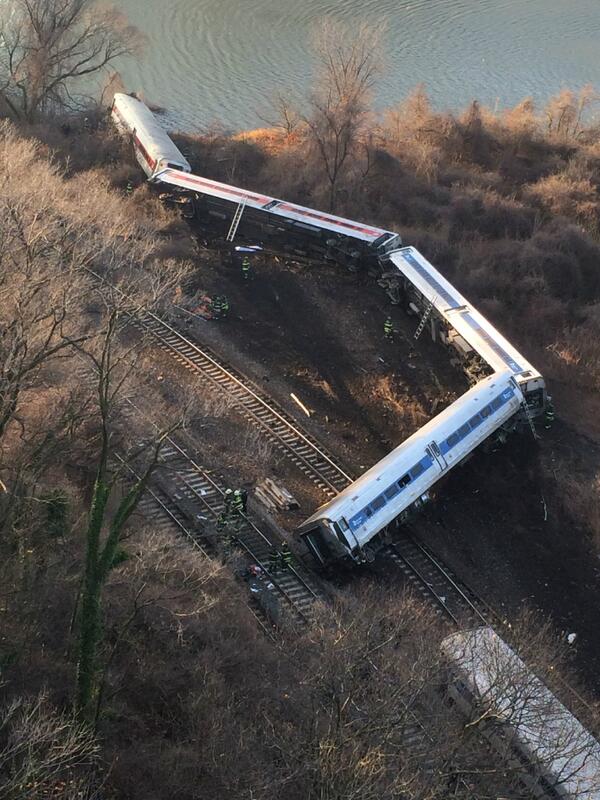 MT @News12CTJackie: Viewer Liz Vuktilaj sent in this photo of the train derailment in the #Bronx. ”

N.Y. Gov. Andrew Cuomo and a medical examiner reportedly arrived at the scene shortly after the train derailed. 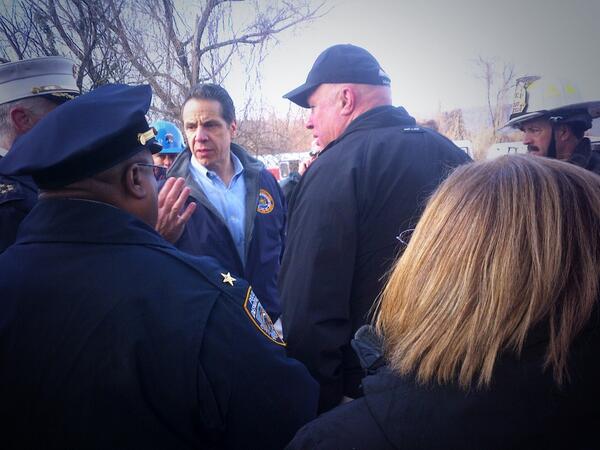 At a press conference on Sunday, Cuomo said that the train’s operator had survived the derailment and was being treated for unspecified injuries.

Three of the four people who were killed were thrown from the train during the derailment, said Edward S. Kilduff, the New York Fire Department’s chief of department.

“Four people lost their lives today in the holiday season,” said Cuomo. “Let us all say a prayer and remember those people we lost this morning.”

Cuomo also told reporters that the four fatalities were from the two cars that had flipped on their side.

“This is obviously a very tragic situation,” said the governor. “The first order of business is to care for the people on the train.”

James Lovell was an audio technician for NBC’s Today show and his longtime friend Janet Barton said he was taking the Metro-North to New York City Sunday to do lighting and sound work on the on the famed Christmas tree at Rockefeller Center.

Lovell was married to Nancy Montgomery, a local councilwoman, and also leaves behind four children. Barton said the Cold Spring resident was loved by all and enjoyed wind surfing and playing the guitar.

Fire Commissioner Salvatore J. Cassano said that there were about 100 people on the train, the New York Times reports. The crash might have been much worse if more people were on board.

On Sunday night officials were uprighting the Metro-North cars in search of other possible victims. At least one body was removed by emergency crews. 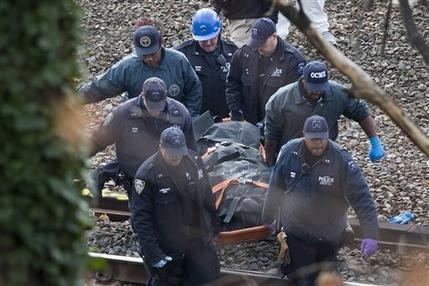 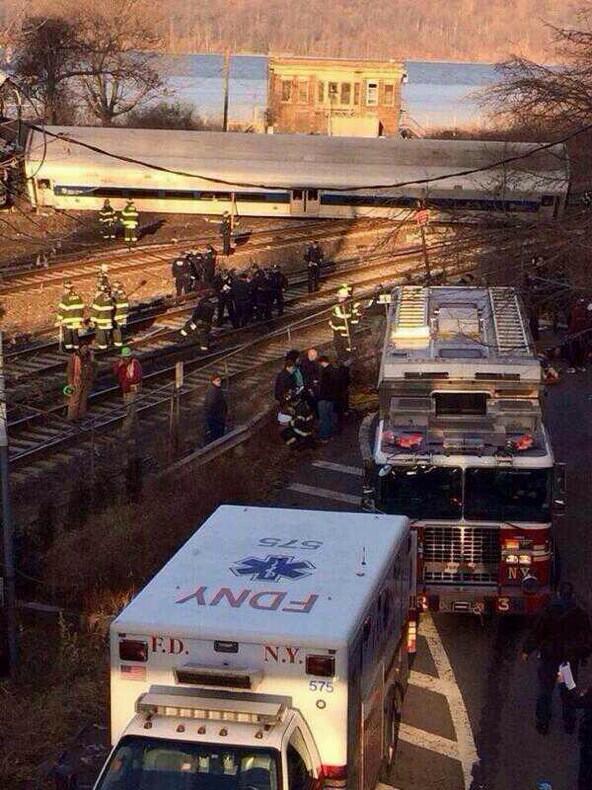 The National Transportation Safety Board Chair said investigators could be on scene for five to seven days.

National Transportation Safety Board released a statement saying that Rail Safety Investigator Mike Flanigon will serve as the investigator-in-charge.

“He will lead a team consisting of investigative specialists in track, signals, mechanical systems, operations, human performance, survival factors and recorders. Specialists from the NTSB Office of Transportation Disaster Assistance are also responding to the scene,” it said.

The Department of Education opened JFK High School at 99 Terrace View Ave. on Sunday as a family assistance center.

A Red Cross worker said six families in total sought assistance at Bronx’s JFK High School, which set up a resource center for people looking for family members believed to be on the train. 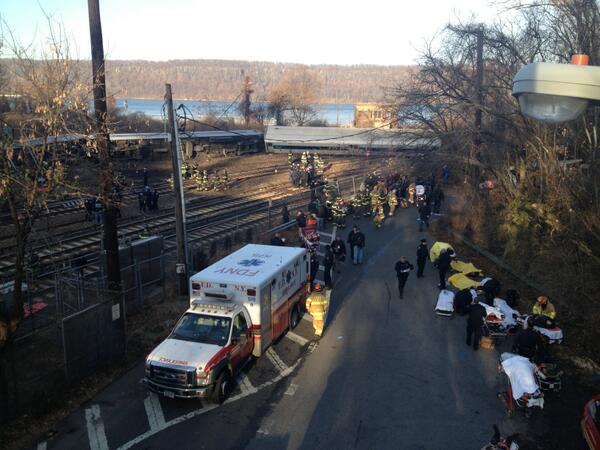 President Obama said his thoughts and prayers are with the friends and families of the victims of the fatal train derailment, the Associated Press reports.

The White House issued a statement saying the president was briefed on the accident Sunday morning. Obama will continue to communicate with New York officials throughout the day. 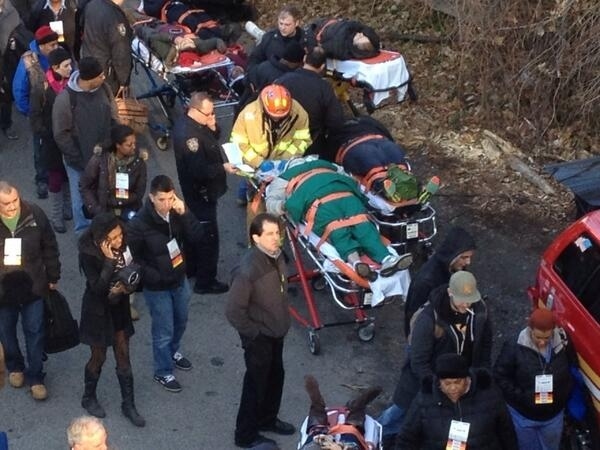 “Our thoughts and prayers go out to the loved ones of those killed and injured in this morning’s tragedy. I spoke with Commissioner Kelly this morning and my office continues to monitor the situation. We stand ready to work with officials and authorities in any way we can to help those in need, and to learn the cause of this accident.”

Mayor Mike Bloomberg was golfing in Bermuda at the time of the accident, the Wall Street Journal reports.

When asked Sunday night by reporters why he wasn’t at the scene, Mr. Bloomberg replied:

What can I do? I’m not a professional firefighter or a police officer. There’s nothing I can do. What I can do is make sure that the right people from New York City – our police commissioner, our fire commissioner and our emergency management commissioner – are there and that they have all the resources that they want.

I was briefed a few minutes, probably a half an hour after the train wreck, or the first time that I’d heard about it, and we responded in the ways that I think the city should be proud of our emergency first responders. They did exactly what they are supposed to do.

According to the Amtrak website, the Amtrak Empire Line Service is still being held between New York City and Albany.

Amtrak’s Northeast Corridor service between Boston and Washington is not affected.

The Metro-North Hudson Line service is also suspended between Tarrytown and Grand Central due to the derailed train, and will remained closed on Tuesday, Dec. 3. Beginning at 11 a.m. ET, bus service will be provided between White Plains and Tarrytown Station for customers wishing to travel in and out of Grand Central.

NBC New York reports that a freight train derailed in the same area earlier this year. It is the first accident with passenger deaths in its nearly 31-year history.

Watch an AP Video of the incident.

This is a developing story. Check back for updates.