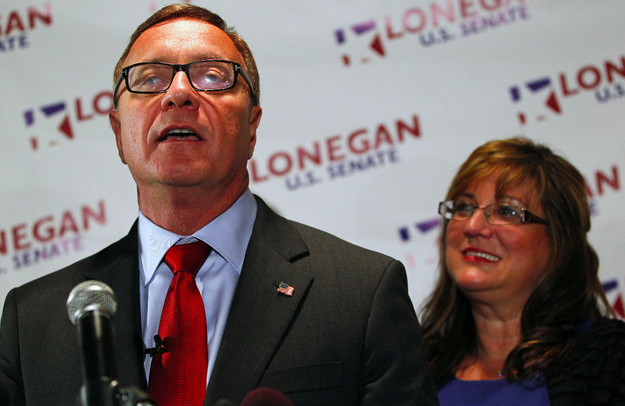 Republican U.S. Senate candidate Steve Lonegan, with his wife Lorraine by his side, makes his victory speech after securing the nomination in the special election primary. Rich Schultz / AP

He calls social security a “Ponzi scheme,” advocates for the “destruction” of Medicare and Medicaid, denounces Spanish-language advertisements as “racial profiling marketing,” and describes Cory Booker, his new opponent in the New Jersey senate election, as a “socialist” who just “can’t wait to pull the race card.”

His name is Steve Lonegan, and Democrats in Washington really want you to meet him.

Five minutes after Lonegan topped the polls in the primary Tuesday night, reporters’ inboxes lit up with a memo and video from American Bridge 21st Century: “The new face of the ‘rebranded’ GOP.”

The political action committee’s email would soon be followed by like-minded statements from the Democratic National Committee and the Democratic Senatorial Campaign Committee. With Booker leading in the polls by an average of 20 points, Democrats in Washington are poised to focus more on pushing Lonegan to the foreground than helping message for their own candidate.

“This is less about Steve Lonegan and more about the national Republicans,” said Michael Czin, a spokesman for the DNC. “They did this autopsy five months ago, and this is what they have? Look at the races we’ve seen since — Mark Sanford, Gabriel Gomez, and now Steve Lonegan.”

“They clearly haven’t learned from their mistakes,” Czin said. “It’s a distinction without a difference: The end result is they have far-right candidates who are going to cost them an election.”

Lonegan, whose positions on nearly every issue line up with the most conservative wing of the party, is to the right of Gov. Chris Christie, whom he ran against in the 2009 gubernatorial primary: He opposes marriage equality, gun restrictions, and abortion, even in cases of rape and incest; he is hawkish on immigration reform; he wants to “dismantle” the Internal Revenue Service; and he rejects climate change. In his victory speech Tuesday night in Secaucus, Lonegan closed with a line from revolutionary Patrick Henry: “Give me liberty or give me death!”

“The Republican establishment can put out all the autopsies they want, but unless they put out concrete steps to address the problem, they’re going to keep getting nominees like Steve Lonegan,” said Chris Harris, communications director for American Bridge.

The PAC’s web video, released Tuesday night, juxtaposes footage of Lonegan on the campaign trail with soundbites from RNC chairman, Reince Priebus, presenting the rebranding report at the National Press Club in March. “We’re done with business as usual,” Priebus says in the video, as an illustrated neon marquee flickers in the corner of the screen: “New and improved GOP.”

Rick Shaftan, Lonegan’s chief strategist, said the nominee’s response to the American Bridge video was, simply, “Yeah so? That’s the best they got?”

Shaftan dismissed the RNC autopsy authors as “apologists for Mitt Romney’s failed campaign,” and argued that Lonegan shouldn’t be concerned with Republicans in Washington. “Karl Rove and Ari Fleischer? The ones responsible for losing everything? We’re supposed to listen to them?” asked Shaftan. “We should do the opposite of everything they suggest.”

“No one in New Jersey cares what the RNC thinks anyway,” Shaftan said.

Harris compared Lonegan to past Republican candidates, like Todd Akin in Missouri and Richard Mourdock in Indiana, whose controversial comments cost them senate wins. “I think he’s more of the Ken Buck model, really,” Harris said, referring to the Colorado district attorney who bungled his 2010 senate run with a series of inflammatory statements. “He’s not some kook. He’s extremely experienced at being extremely conservative, and he’s been around politics for a long time. He’s not new to the game.”

Lonegan raised eyebrows earlier this month when his campaign tweeted, and then deleted, a hand-drawn map of Newark labeled with the names of African and Middle Eastern countries under a caption that read, “Cory Booker’s foreign policy debate prep.” After Booker called the tweet “deplorable,” Lonegan accused his opponent of pulling “the race card.”

Despite the upset over the tweet, the GOP apparatus has endorsed Lonegan in the race. In a statement released Tuesday night, the National Republican Senatorial Committee chairman, Sen. Jerry Moran, lauded Lonegan as “just the type of commonsense conservative we need,” and an RNC spokeswoman told Roll Call Thursday the organization would support the nominee.

“It’s surprising to see the NRSC back someone so extreme after they promised to recruit mainstream candidates,” said Justin Barasky, a spokesman with the DSCC. Barasky described the organization’s future involvement in the race as a combination of “whatever needs to be done to elect Cory Booker, and be helpful in pointing out the difference between” the two candidates.

The Longean campaign, said Shaftan, is “looking forward” to the attention from national Democratic groups, arguing the added media would “just get people more excited.”

An RNC spokesman did not respond to requests for comment.

Previous Post: Disabled Veteran’s YouTube Complaint Against United Airlines Goes Viral
Next Post: If You Eat Tilapia You Need To Stop Right NOW! The Reason Why? I Had No Idea