Is “Ni No Kuni” The Last Great Japanese Role-Playing Game? 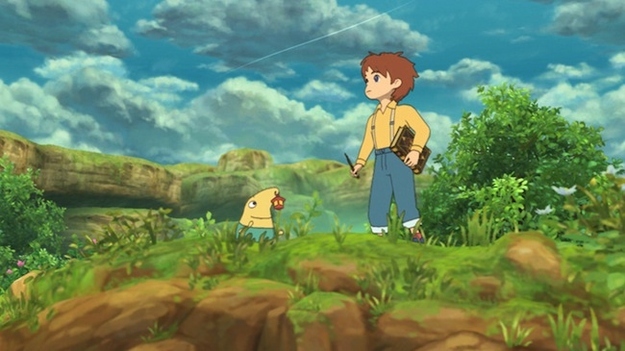 Whenever I hear someone refer to gamers as uncultured, or incurious, or aggression-addled, or attention deficit disordered, I wonder if that person has ever seen a Japanese role-playing game. JRPGs are long — always more than 30 hours, and sometimes up to 60 or 70. They are slow. They are no more violent than a Saturday morning cartoon. And they can be wonderfully, sometimes bafflingly weird, the products of an aesthetic culture so different as to be transporting. These games, which reward enormous patience with a kind of tourist’s enchantment, are about as far from Modern Warfare as you can get.

So it’s remarkable that these titles were, once upon a time, some of the most popular games in the United States. Final Fantasy VII has sold more than 3 million copies in North America since its release in 1997. And if you exclude the money-printing Madden, Grand Theft Auto, and Gran Turismo series, Kingdom Hearts, the 2002 collaboration between Final Fantasy-makers Square Enix and Disney, was the second best-selling game for PlayStation 2 in this region.

But the past decade has been terrible to JRPGs. The widespread introduction of voice acting into these plot-heavy games was disastrous. Dialog that was charmingly idiosyncratic in text bubbles turned cringingly awkward when performed in earnest by American and European voice actors. (It is a testament to the awfulness of JRPG voice acting that this clip comes from last year’s Xenoblade Chronicles, widely cited as one of the best voice-acted JRPGs ever.)

Blocky and bland three-dimensional worlds replaced the lovely hand-drawn backgrounds that were a hallmark of the genre. Bloated and vague orchestral scoring replaced the earworms of 16- and 32-bit masterpieces. Yes, the newer games played the same and occasionally innovated, but the hopeless accoutrement revealed a truth of the genre: Most JRPGs move so slowly that the window dressing has to be breathtaking to make them enjoyable. In the past five years, ambitious and risk-taking American role-playing games like the Mass Effect and Elder Scrolls series have taken the place of JRPGs, which fled to the nostalgic redoubt of handheld remakes and digital downloads. (And nostalgia for these games is as intense as it is commodifiable; look no further than the Sisyphean grasping of superfans at the hope of a Final Fantasy VII remake, dangled regularly by Square Enix.)

Every year or two, though, a large-scale JRPG is burdened with the task of resuscitating the genre in the American market. Recent failures by this standard include Final Fantasy XIII, Lost Odyssey, and Xenoblade Chronicles. Ni No Kuni: The Wrath of the White Witch, released last month for the PlayStation 3, is the newest contender. The game is a collaboration between Studio Ghibli, the legendary animation studio behind Spirited Away and Princess Mononoke, and Level-5, perhaps the best current developer of JRPGs. In other words, Ni No Kuni has impeccable bona fides.

And it lives up to them. The game corrects virtually all the problems of presentation that plague modern JRPGs. The voice acting is terrific. The music, by the longtime Ghibli composer Joe Hisaishi, is atmospheric when it needs to be but never shrinks from a melody. And the world of the game is imaginative and beautiful. It has all the texture and color and humor of a Ghibli cartoon, and the experience of moving through it is thrilling. Some of the creatures in the game are as unforgettable as anything from Disney or Pixar. Special mention must be made of the game’s Tinkerbell, a mildly profane fairy with a Welsh accent named Mr. Drippy. As I played Ni No Kuni, I would move my character around just so I could watch Mr. Drippy stumble and trip and dance along behind him. The sight of his fat body trundling up stairs is one of the most indelible things I’ve witnessed in gaming in a long time. 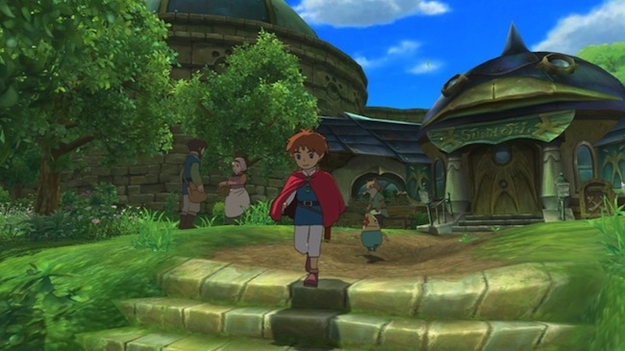 Like the best JRPGs of the 1990s, Ni No Kuni (which means, literally, “Second Country”) transports not just through aesthetics, but through narrative. Its story, which is about an orphan named Oliver who attempts to bring his mother back to life by finding her spirit in Narnia-like parallel universe, is elegant and affecting. It works both as a fairy tale for children and a metaphor for the interiority of childhood grief, one that adults will, I think, find moving. Ni No Kuni simply embarrasses the storytelling in other games of its type.

So, yes, this is a terrific game, an experience I hope parents share with their children and nostalgic ex-JRPGers make the time for. It deserves mainstream success. Unfortunately, it also represents an enormous problem of scale. It took Japan’s greatest animation house and one of its most respected game developers three years to make a game sufficiently polished to avoid the hazards of the modern major JRPG in America. What hope is there for everyone else, without the expertise and the resources of these companies? The bar for making big role-playing games that play well in America may simply be too high, and the temptation to cheaply recast old yearned-for games — especially with the ease of mobile distribution — too great.

It’s worth remembering that this problem is one facing major console games in general, not just one beloved subgenre. There simply are not that many studios with the resources and expertise to make a console game of this magnitude. But now that we know the daunting creative requirements for making a successful big-budget console JRPG, it may well be the case that no one is able to meet them. Well, almost no one. The CEO of Level-5 Akihiri Hino, told the Japanese gaming magazine Famitsu last year that strong sales for Ni No Kuni outside of Japan could encourage the company to make a sequel. So play the game: It’s an accomplishment of its kind. Just don’t be surprised if it’s among the last.