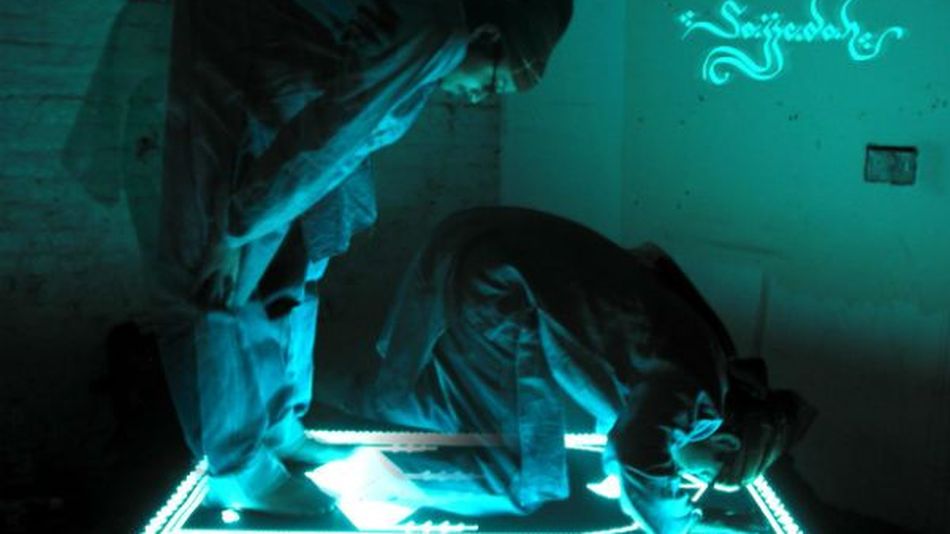 There are 1.6 billion Muslims in the world, many of whom direct daily prayers toward the holy city of Mecca in Saudi Arabia. One designer from the U.K., Soner Ozenc, would like to bring some tech innovation into the prayer space, by creating a prayer mat that lights up when it faces Mecca.

The prayer mat is called EL Sajjadah — “EL” stands for Electro Luminescent and “Sajjadah” means prayer mat. EL Sajjadah is lightweight, flexible and has a built in digital compass, which lights up when facing Mecca.

“I was looking at designing flying carpets, but I came to a point where I needed to add a function to the project,” Ozenc told Mashable. “Then I came up with the prayer mat idea. You need to put mat on the floor and use a compass, but why not embed a digital compass?”

In the six years since Ozenc began working on EL Sajjadah, he says he has received no negative feedback about the blending of technology into traditional religious practices (the prayer mat is the only object necessary for Muslim prayer).

In addition to its function, EL Sajjadah is designed to be wall art you can hang in your home. Its black base represents the color of the Kaaba in Mecca and its designs are in green, the holy color of Islam. It was displayed in New York’s Museum of Modern Art’s exhibit “Talk to Me: Design and the Communication Between People and Objects” in 2011, and the museum has purchased a copy to be part of its permanent collection.

The Kickstarter has 35 backers so far, but has only raised a bit more than $6,000 of its $100,000 goal. If you would like to get you hands on one of the first releases of EL Sajjadah, you must contribute at least $500 to the project, which will expire August 14.

What do you think of this melding of technology into traditional religious practices? If you’re a practicing Muslim, would you buy EL Sajjadah? Let us know in the comments.

Previous Post: What Happens When A Man In A Mentos Suit Jumps Into A Tank Of Diet Coke?
Next Post: Maru Makes A Friend