The suspense! Usually, lawmakers exit a closed door meeting and head straight for the TV cameras. House Speaker John Boehner and Minority Leader Nancy Pelosi were uncharacteristically quiet leaving their fiscal cliff meeting with President Obama this afternoon, but Pelosi’s getaway was anything but clean. Reporters anxious for a scoop managed to catch Pelosi searching the parking lot for her SUV.

Just what was going on in there? Must have been some intense negotiations. 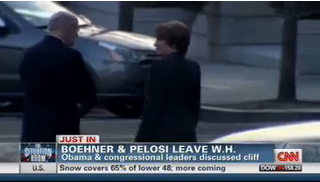 Seriously, has anyone seen it? It has the giant novelty gavel on the roof.

Oh, in other news, no one else looked happy exiting from that meeting, either. Not even Sen. Harry Reid looked happy — not that we’d know what that looks like.

It looks like Boeher had his ride ready to go, and he’s not coming back.

Dang, that was quick!