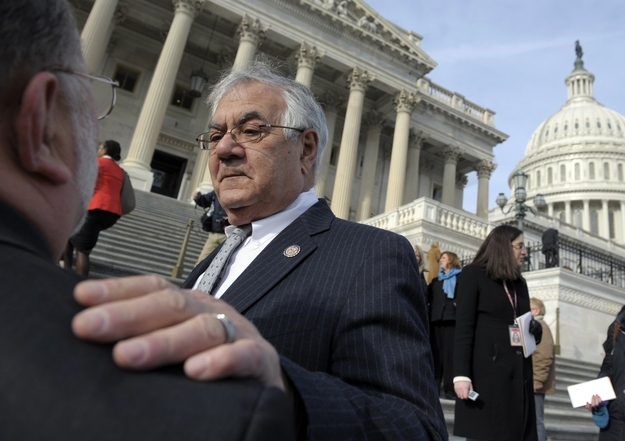 Retiring Rep. Barney Frank, D-Mass. talks on Capitol Hill in Washington, Thursday, Jan. 3, 2013, prior to the start of the 113th Congress.

WASHINGTON — Former Rep. Barney Frank, on his first full day out of Congress in more than 30 years, said this morning that he has asked to return to Congress, in the Senate seat currently held by Sen John Kerry on an interim basis.

Frank said Friday on MSNBC’s Morning Joe that he has talked with Massachusetts Gov. Deval Patrick about the interim appointment Patrick would make to the Senate if Kerry is approved for Secretary of State until a special election is held. Although Patrick has said he will not make a move on the appointment until there is a vacancy, Kerry is expected to be confirmed easily for the position.

“I’m not going to be coy,” Frank said. “It’s not something I’ve ever been good at. I’ve told the governor that I would now like, frankly, to do that because I would like to be a part of that. It’s only a three-month period; I wouldn’t want to do anything more.”

In a follow-up interview with the Boston Globe, Frank expanded on his reasons, discussing congressional action on spending cuts in the coming months:

“The first months of the new Senate will be among the most important in American history. I may be a little immodest, but I called the governor and said I think I can be a help in reaching a fair solution to some of these issues.

“I think there are progressive ways to work on Social Security and Medicare. I think making the case against them (Tea Party Republicans) on the debt limit is important. A split emerged in the Republican Party over the fiscal cliff, with mainstream Republicans splitting with the radical right. I think it’s important for us to continue to exploit that. We need to reach out to conservative Republicans who nonetheless are willing to compromise, and find a way to reach a deal.”

Frank first opened the door to considering the appointment in an interview before the fiscal cliff conclusion, however, with Politico.

Among the other issues that could come up during a temporary appointment of Frank: the nomination of a defense secretary to replace Secretary of Defense Leon Panetta. Frank already has said he opposes one potential nominee, former Sen. Chuck Hagel, for comments Hagel made about an out Clinton nominee, James Hormel, in 1998.

HRC spokesman Michael Cole-Schwartz told BuzzFeed, “As the Congress continues to grapple with taxes and the budget, as well as moving LGBT priorities forward, bringing his experience and intellect to bear would be a benefit to all Americans.”

If appointed, Frank would follow Sen. Tammy Baldwin of Wisconsin, who took office Thursday, as the second out LGBT senator.

Previous Post: An ingenious excuse for not being able to back up a claim with sources
Next Post: Tamara Holder: ‘All Republicans, or most Republicans, are fat-asses’