Attention Everyone: The Milwaukee Bucks Are Your New Favorite NBA Team 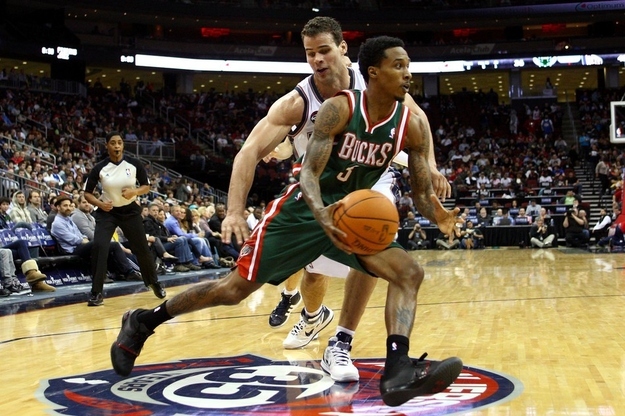 Last night, a miracle happened. The Golden State Warriors, tired of toiling in injury-plagued, third-from-last-place frustration — even though they’re only three games out of the playoffs! I give you the Western conference, everyone — have traded insanely dynamic volume-shooting guard Monta Ellis to the Milwaukee Bucks, along with promising shot-blocker Ekpe Udoh and the decomposing contract that is Kwame Brown. In return, they receive dominant defensive center Andrew Bogut and the disturbing but still-talented scorer Stephen Jackson.

First off, briefly: this is a good trade for Golden State. After three seasons bouncing metallically off one another, Stephen Curry and Ellis have demonstrated to everyone’s satisfaction that they create one defensive liability too many to play in the same backcourt, despite those occasional moments when they transformed into the best scoring-guard duo in the league. And Andrew Bogut, when healthy, ranks as one of the premier defenders in basketball, providing rookie Warriors coach Mark Jackson the tool he needs to turn his team into a defensive machine. (Unsurprisingly, “HAND DOWN MAN DOWN” hasn’t quite done it.) OK, big question time, though: will Andrew Bogut and Stephen Curry ever be healthy at the same time, ever? Probably not! But those are problems for another season, because Golden State’s mailing this one in.

Now: the Bucks. Since he passed up college to head to Italy and ply his trade as a professional, Brandon Jennings has been one of my favorite players. (Athletes SHOULDN’T BE FORCED to go to college; sorry.) With his insane handles, hyper-elastic mobility, and tendency to jack up vertiginous shots, Jennings would’ve looked out of place on a college court anyway, bricked into some slow, 35-second shot-clock offense. Brandon Jennings is not a 35-second shot-clock player. He got drafted by the Bucks when the Knicks, in desperate need of an exciting and lethal point, decided to pass on him in favor of Arizona forward Jordan Hill, who they knew was, at best, a project. (Remember: the Knicks are dumb.) In the seventh game of his career, Jennings welcomed Golden State to the Great American North and vivisected them with Michael Mann-esque gusto, scoring 55 points on 34 shots and going 7 of 8 from three-point range. Dude had arrived.

That first season continued to go well. The Bucks made the playoffs, buoyed by a healthy Andrew Bogut, Luke Ridnour off the bench, and a surprisingly effective John Salmons. They took Atlanta to seven games and lost, heartbreakingly; my dominant memory from the series is Jennings crossing up some Hawk until he turned into goo and then burying a criminal three. Then in 2010, everything went to hell. Bogut broke his arm. Jennings regressed. Whatever, sophomore slump, things happen, I said, because I love Brandon Jennings. And I was right! This year, the Bucks have caught the disintegrating Knicks for a share of eighth place in the East, and Jennings has blossomed, getting his true shooting percentage — a more effective measure of shooting than field goal percentage, because it factors in the greater importance of three-pointers — over 50% for the first time. Nearly 20 points a game, too. 5.7 assists. And all without Bogut.

Now Monta Ellis, who is basically Brandon Jennings if he were a little bigger, a little angrier, and a little less interested in passing the ball, has come to Milwaukee, and the world is aghast. But they both want to score! How will the two be satisfied? (Sorry if I’m making fun of you.)

One of the deepest and darkest secrets in sports is that there is a certain delight, a joy, in losing interestingly. Fans crave spectacle; they need explosions, wild shots, guards twisting around like eels and hitting the rack like boxers. Last decade, the Detroit Pistons and the San Antonio Spurs both grew into historically great franchises, and nobody cared, because winning only makes you happy if you can enjoy watching it happen. Winning in a vacuum satisfies the players and the diehards, and that’s it.

With this new look Bucks team, happiness is basically guaranteed. Best case scenario: two of the most visceral and thrilling players in the league manage to gel together, providing a double-headed offensive threat to rival Tony Parker and Manu Ginobili. Scott Skiles bullies them into playing some version of an effective defense without driving the two temperamental guys insane, and the team sneaks into the playoffs in the eighth spot, or even catches an exhausted Boston or depleted Atlanta, which has traded away Josh Smith and decided Joe Johnson deserves even more money. Then they win a playoff series! (This probably won’t happen. But maybe.) More likely, they do manage to make the playoffs and get beautifully destroyed by the Bulls or the Heat. But Jennings, with the pressure decreased due to the presence of Ellis, continues to grow into a capable point guard and vicious scorer; Ellis becomes happy in a place he can succeed; Ilyasova builds on his recent 20-10 streak; Mike Dunleavey shoots threes; Jon Leuer does his Jon Leuer thing; and the Bucks win a bunch of games.

Even in the worst case, a dilapidated Jennings and bloodlusting Ellis will make for engaging theater. If they lose, at least it’ll be fun to watch.

Previous Post: Researchers Find That Chimps Are Better People Than A Lot Of Actual People
Next Post: A Kid Says Something To A Teacher That No One Should Have To Experience