1. Wednesday morning, a massive sinkhole opened up inside of the National Corvette Museum in Bowling Green, Ky.

2. When the sinkhole started opening around 5:30 a.m., it triggered an alarm that called the local fire department.

Screenshot from a camera inside the Corvette Museum Skydome.

3. The sinkhole is reportedly 40 feet wide and at least 20 feet deep. 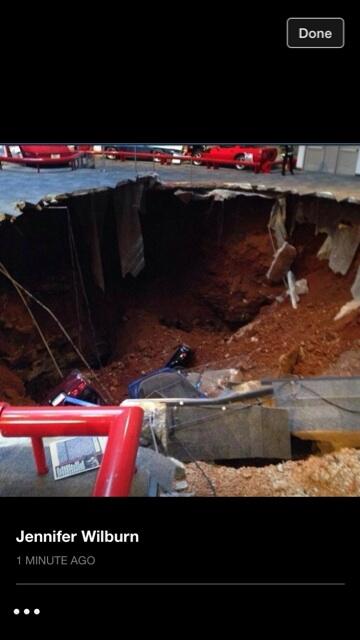 A sinkhole has developed at the Corvette Museum in Bowling Green. 8 cars so far in it

6. According to WKYU-FM, eight cars were swallowed up by the sinkhole. Two of them were on loan from General Motors, and the others were owned by the museum.

7. The museum is currently closed as its engineers assess the damage.

UPDATE: The National Corvette Museum has decided to close until the structural integrity of the Sky Dome area is fully investigated.

9. Also, the Vice President’s office gave their condolences, as well.

Previous Post: The “Swing Wing” Is A 1960s Toy That Will Make You Look Absolutely Insane
Next Post: Teacher Caught On Camera Making A Student Cry. Itâ€™s Actually Pretty Amazing.