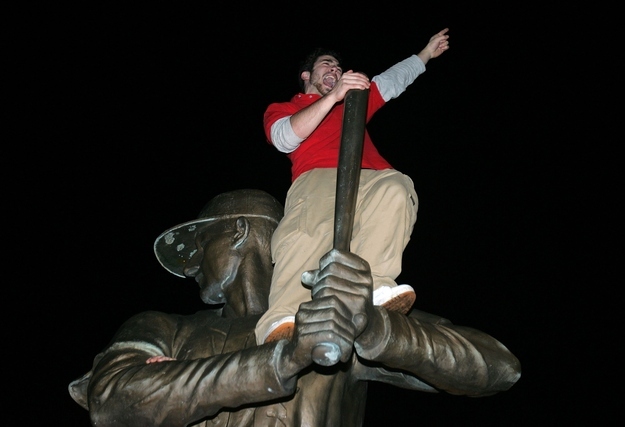 With an 83-78 regular-season record, there’s never been a worse indictment of baseball’s watered-down wild-card system. Sheer decency dictates that the players from that team should give their rings to the 1993 Giants team that won 103 games and didn’t make the playoffs.

2. Their role in forging the myth of Mark McGwire, Sports Hero. 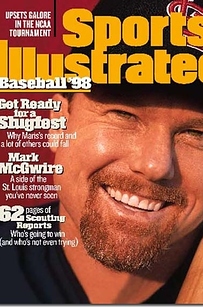 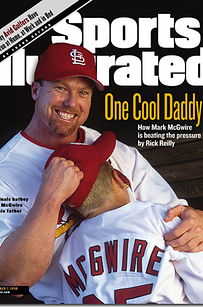 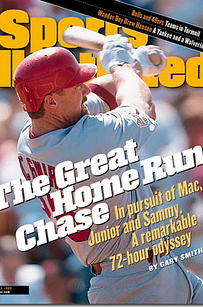 We’d go into the whole McGwire thing again, but we’re not here to talk about the past.

3. Their mascot is a child’s waking nightmare. 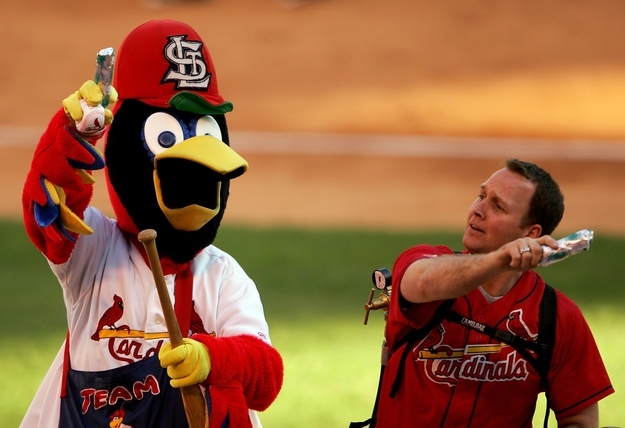 Look at this fucking bird. Is this something you’d allow your young ones to make eye contact with? His name is Fredbird and he’s been around since 1979, so there’s not even any old-timey nostalgia. And its “thing” is beaking little kids, which is when it puts your child’s head in its mouth. Whose disturbed drug-addled mind do we blame for this? Never mind. Don’t want to know.

4. The narcissistic conceit that Cardinals fans are somehow better than others. 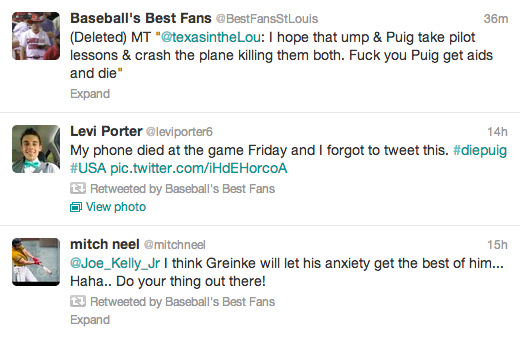 (That last one refers to Dodgers pitcher Zach Greinke’s past problems with anxiety and depression.) We won’t belabor this point, as others have done so far more effectively. We’ll just say this: All sports fans can be both awful and great in their own ways. No one is better or worse than anyone else. To try and argue otherwise is never a good idea.

5. They nullified one of the most spectacular catches in baseball history.

If the Mets had won Game 7 of the 2006 NLCS, we’d have been talking about this game-saving catch EVERY DAY SINCE. Thanks a lot, Yadier Molina.

6. They broke up with Albert Pujols right before he started sucking. 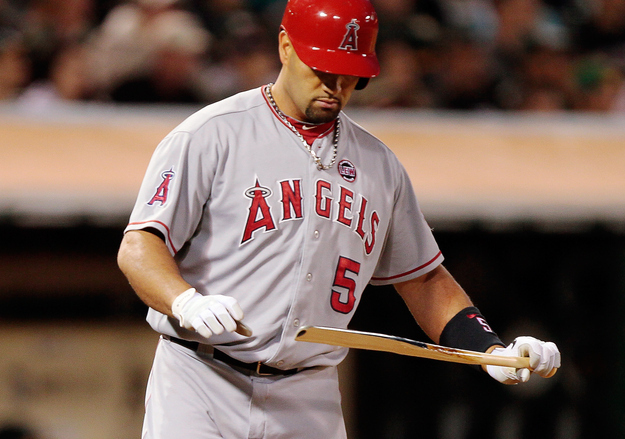 We’ll look back on this as the smartest move the Cardinals made (or didn’t make) in the last 30 years or so, since the time they traded for a promising San Diego shortstop named Ozzie Smith. But just the idea that the Cardinals got away scot-free from The Bad Pujols to such spectacular benefit — using the saved money to sign Carlos Beltran, using the extra draft pick to select Michael Wacha, and so forth — is rage-inducing. 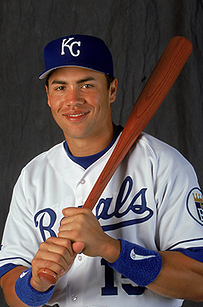 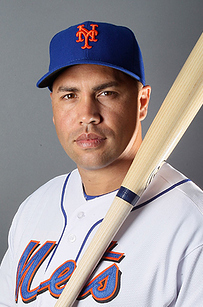 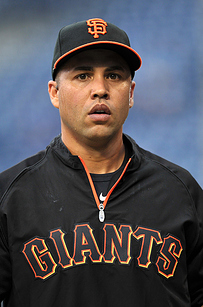 Seven mostly brilliant seasons in Kansas City begat a bathroom break in Houston (not pictured) begat a monster contract and seven seasons with the Mets begat a trade to the San Francisco Giants, who gave up their top pitching prospect for him. Beltran then signed with St. Louis as a free agent. For all the years of hype and expectations, he’s never helped any of those teams actually win a World Series. (His strikeout against the Cardinals to end the 2006 NLCS still keeps Mets fans up at night.)

8. Matt Holliday should’ve been suspended for this.

The Cardinals outfielder injured San Francisco second baseman Marco Scutaro with this reckless and unnecessary slide during Game 2 of the 2012 NLCS. His emotionless apology after the game was just weird, but karma came back for the Giants as they won Games 5, 6, and 7 to stun the Cardinals and advance to the World Series.

The final out of the series? Matt Holliday popping up to Marco Scutaro.

9. The idea that Stan Musial was “baseball’s perfect warrior.” 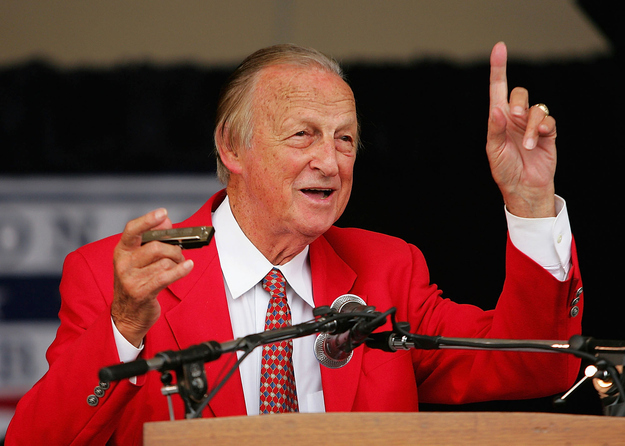 That’s what MLB commissioner Ford Frick called Musial on the day of his retirement in 1963.

OK, here’s the thing: Stan Musial was a hell of a ballplayer. One of the best ever, no doubt about it, but what Cards fans forget is the one of part. Yes, he was a three-time champion. Yes, he was a 24-time All-Star. But he didn’t have the power of Hank Aaron or the speed of Willie Mays or the batting eye of Ted Williams, and his peak years in the mid-1940s, early in his career, came while MLB was watered down by players overseas during World War II. So, you know, a little perspective, please. 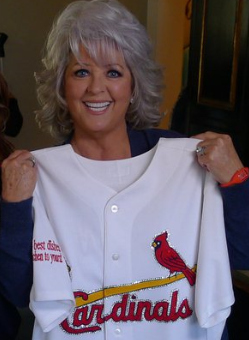 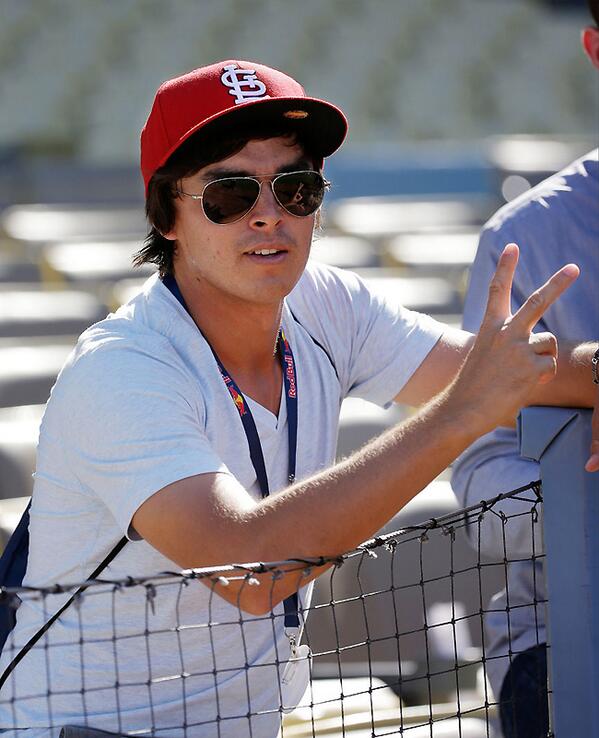 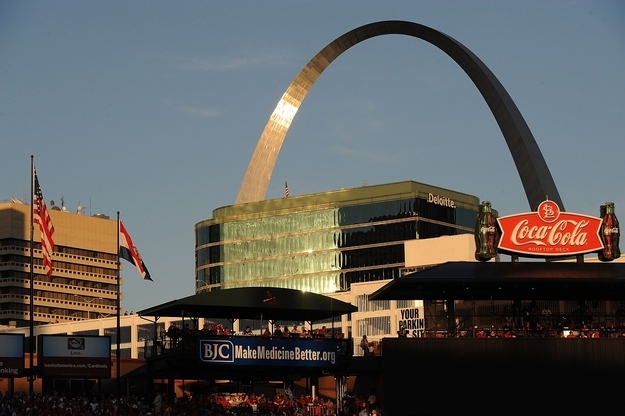 What is the Arch? What does it even do? The Statue of Liberty has historical significance and looks nice. The Golden Gate Bridge transports drivers and pedestrians across water and looks really nice. The Washington Monument is classic architecture repurposed for a modern age. But the Arch? No practical purpose and little more than monument building for its own sake.

13. Everything about David Eckstein. 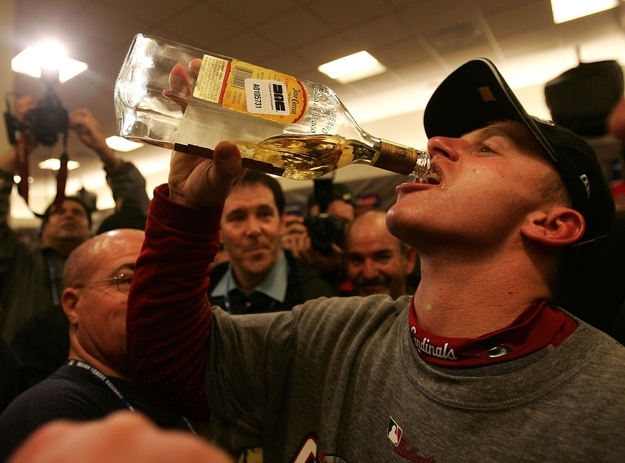 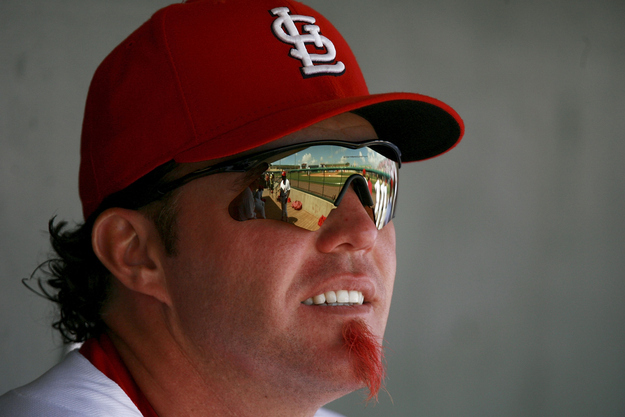 Like a bird flew straight into his chin and died there. 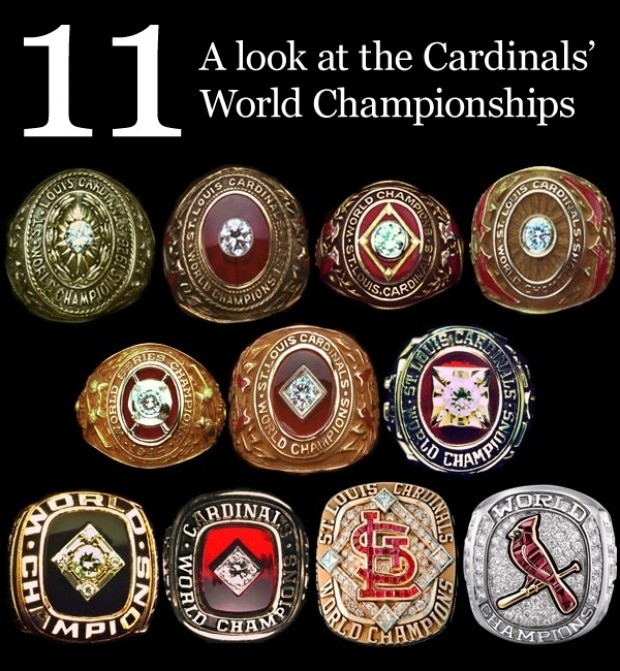 Eleven rings? Hey, that’s cool. Like, really good for you guys. Why don’t you come back when you have half as many as the Yankees?

(This one is really just a Mets fan’s jealousy, but still.)

We get it. You’re excited.

17. They only won their last World Series only because Nelson Cruz is a lousy fielder. 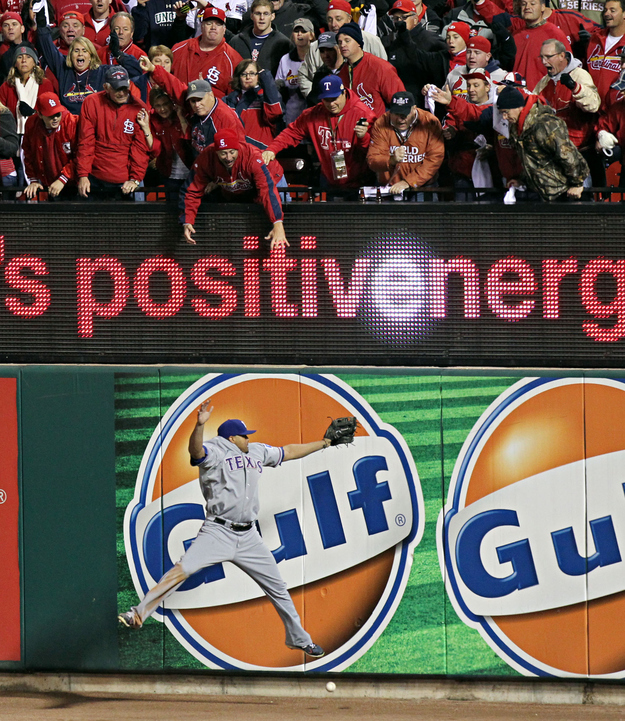 The Rangers were within a strike — twice — of winning the 2011 World Series. Try catching the damn ball next time. 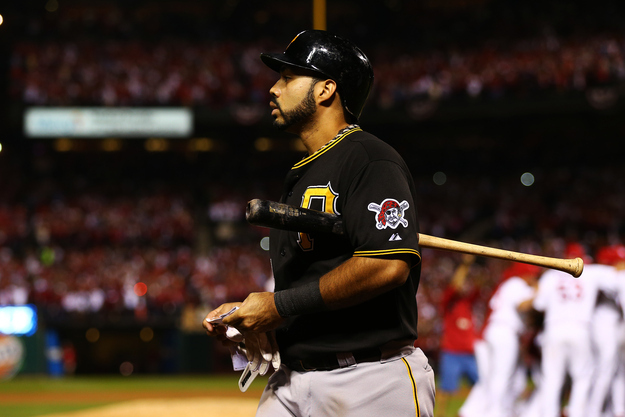 All those years of losing finally came to an end for an extremely likable Pirates franchise — only to have the Cardinals screw it all up with a Game 5 win in the NLDS. We all deserved better.

19. Everything about Tony La Russa. 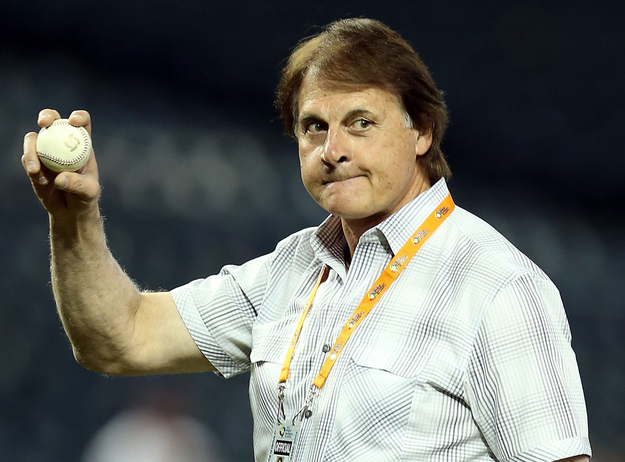 It goes so far beyond having one of the most unlikeable people in the country (George Will) write a book (Men at Work) that, in turn, makes La Russa seem impossibly pompous. There are other legit reasons to hate La Russa, namely his nearly career-long association with Mark McGwire, the most famous juicer of his era, or when he was arrested for a DUI so egregious he’d passed out at a green light.

Charlie Pierce once wrote the best summation of how La Russa was perceived by a baseball media corps over-eager to praise “genius”:

At some critical juncture — or at several critical junctures — La Russa will feel compelled to exercise his superior intellect, probably as regards to a pitcher. The TBS broadcast crew undoubtedly will point out the subtle brilliance of this maneuvering, and then the whole game will blow up in his face. If he brings in a reliever, the next pitch will be picked up by NORAD. If he leaves in his starter, the guy will petrify right there on the mound. And, by Game Three, say, La Russa will have absolutely nobody left to come in to pitch the eighth or ninth inning in a tight game. He will outsmart himself again. The wonder will be why anyone thinks outsmarting Tony La Russa is all that hard.

OK, there’s one thing to like about Tony La Russa: He’s a foster cat dad. 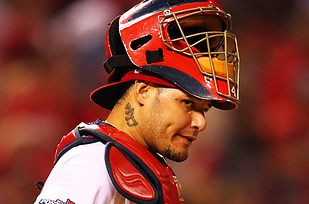 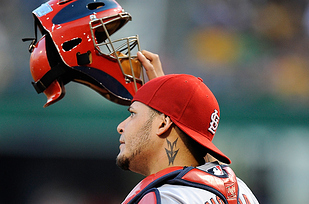 What the hell are those things? 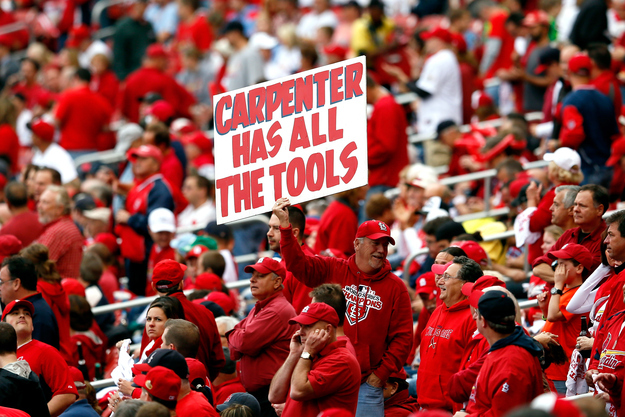 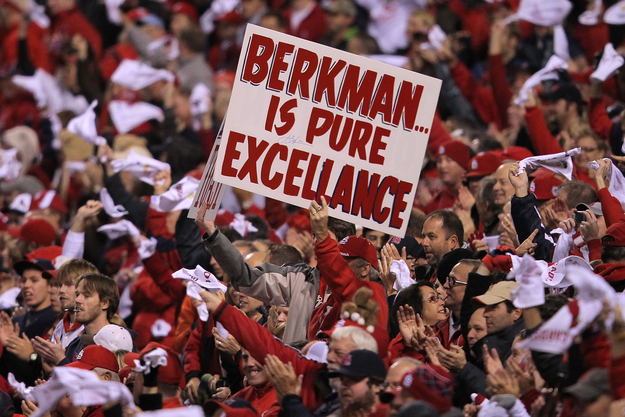 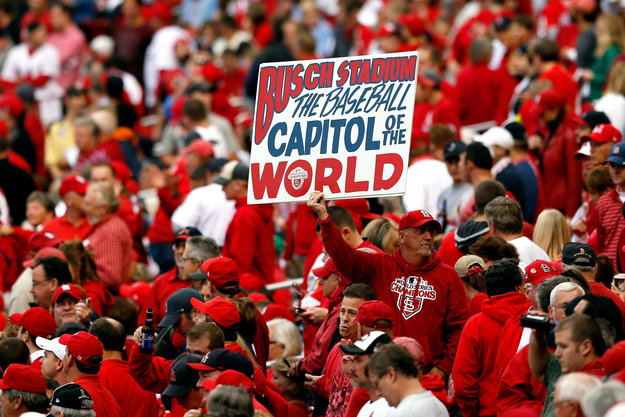 Previous Post: Her Daughter Was Ditching School, So She Taught Her An Embarrassing Lesson
Next Post: Here Are The Best News Bloopers From 2012